How Brexit Will Affect Travel to the U.K. and Europe. For Americans traveling to a European Union country, most likely, simply because British citizens will now be standing in the passport control and customs lines with them. 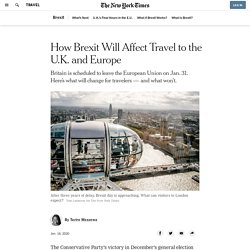 But for travel to Britain, Mr. Chacko of Travel Leaders Group said things shouldn’t change. The more than three year battle to implement Brexit has been bad for the British economy, but good for international travelers. The impact of Brexit on the UK economy - CNN. The government published a report Wednesday that outlines the economic costs associated with a range of Brexit scenarios. 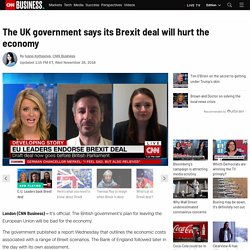 The Bank of England followed later in the day with its own assessment. The United Kingdom would be worse off under all scenarios studied by the government. Officials did not estimate the precise impact of the deal Prime Minister Theresa May has negotiated with the European Union, but even in the best case it too will mean a weaker economy than remaining in the bloc. "It is true that the economy will be very slightly smaller, but if we do the deal in the way that the prime minister has set out and negotiated, that impact will be entirely manageable," UK Treasury chief Philip Hammond told the BBC.

The official estimates underscore the harsh economic reality of Brexit: Under any scenario, leaving the European Union will make Britain poorer than staying in. "The important thing ... is to keep trade flowing as much as we can," Hammond told Sky News. NPR Choice page. NPR Choice page. Avertissement de redirection. Why are there protests in Hong Kong? All the context you need - BBC News. 1-s2.0-S1201971220300114-main. Dreams of Westphalia: Can a Grand Bargain Solve the Middle East's Problems Reviews & Responses 99 Foreign Affairs 2020. 10. Two-stage cultivation strategy for simultaneous increases in growth rate and lipid content of microalgae: A review. 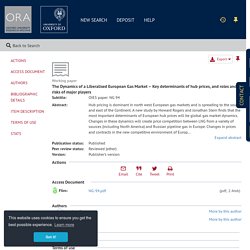 Unfortunately we are not able to make available the full-text for every research output. Please contact the ORA team ( ) if you have queries regarding unavailable content OR if you are aware of a full-text copy we can make available. Content may be unavailable for the following four reasons Version unsuitable We have not obtained a suitable full-text for a given research output. Europe markets: Investors monitor coronavirus updates. European markets closed higher Wednesday as traders monitored corporate earnings and the spread of the new coronavirus. 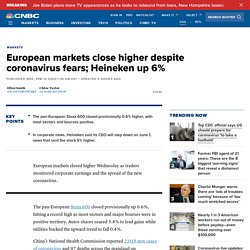 The pan-European Stoxx 600 closed provisionally up 0.6%, hitting a record high as most sectors and major bourses were in positive territory. Autos shares soared 3.8% to lead gains while utilities bucked the upward trend to fall 0.4%. China’s National Health Commission reported 2,015 new cases of coronavirus and 97 deaths across the mainland on Wednesday. The outbreak, which originated in the Chinese city of Wuhan and has killed 1,113 people in the country, has led to the shutting down of factories, businesses and transportation in China. On Wall Street, stocks rose with the Dow Jones Industrial Average up over 180 points while the S&P 500 and Nasdaq indexes were also in the green. Back in Europe, euro zone manufacturing output plunged more than expected in December, falling 2.1% month-on-month against the expected 1.6% slide, according to Eurostat.