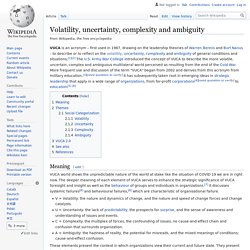 The common usage of the term VUCA began in the 1990s and derives from military vocabulary.[1] It has been subsequently used in emerging ideas in strategic leadership that apply in a wide range of organizations, including everything from for-profit corporations[2] to education.[3] Meaning[edit] The deeper meaning of each element of VUCA serves to enhance the strategic significance of VUCA foresight and insight as well as the behaviour of groups and individuals in organizations.[4] It discusses systemic failures[5] and behavioural failures,[5] which are characteristic of organisational failure. These elements present the context in which organizations view their current and future state. They present boundaries for planning and policy management. Themes[edit] Mundaneum sur Twitter : "Sur @GoogleDoodles aujourd'hui, #PaulOtlet est à l'honneur. Dépêchez-vous, ça ne dure que 24h! 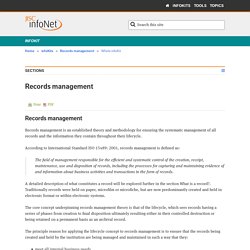 They employ hundreds if not thousands of staff, undertake a varied range of functions and have complex administrative structures often straddling multiple geographical locations. In order to operate as modern, agile and efficient organisations able to sustain growth and manage change it is essential that they have effective control over the records they create and use. Historically the way in which internal records have been managed has developed in a piecemeal, organic fashion – often in response to local departmental requirements. It is now increasingly recognised that a more proactive, consistent and comprehensive approach is required for the institution to be able to cope with current and future demands.

Whole Infokit. Thankfully this is a problem which can be easily solved with the application of some simple rules regarding file versioning. 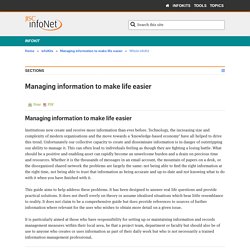 In most cases the information on version codes outlined below should be read and implemented alongside the guidance in Creating Information: What Makes A Good File Name? With the version code appearing as a suffix to the main file name. As with the advice on file naming the key to success is the standardisation of approach across all users. Using version codes. Knowledge transfer. New Games – New Rules Knowledge Transfer, and specifically the transfer of innovation and intellectual property from colleges and universities to businesses and other communities, is a changed game. 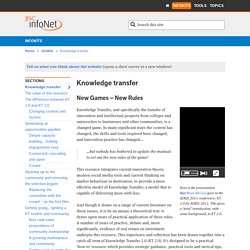 In many significant ways the context has changed, the skills and tools required have changed, and innovation practice has changed… …but nobody has bothered to update the manual: to set out the new rules of the game! This resource integrates current innovation theory, modern social media tools and current thinking on market behaviour or motivation, to provide a more effective model of Knowledge Transfer; a model that is capable of delivering more with less. Knowledge Transfer 2.0 Presented By Brian McCaul. 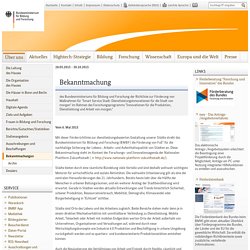 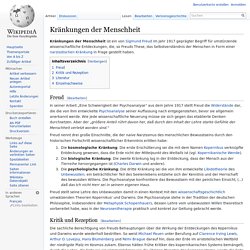 New Clues. The AI Revolution: Road to Superintelligence - Wait But Why. PDF: We made a fancy PDF of this post for printing and offline viewing.

Buy it here. (Or see a preview.) Note: The reason this post took three weeks to finish is that as I dug into research on Artificial Intelligence, I could not believe what I was reading. Cookpull.pdf. Initiative Smart Country - Einzelsicht des Paragraphen. Initiative Smart Country - Startseite. Doc et théorie. S 2014 Hype Cycle for Emerging Technologies Maps the Journey to Digital Business. STAMFORD, Conn., August 11, 2014 View All Press Releases 2014 Hype Cycle Special Report Evaluates the Maturity of More Than 2,000 Technologies 2014 Marks 20th Anniversary of the Gartner Hype Cycle The journey to digital business is the key theme of Gartner, Inc.'s "Hype Cycle for Emerging Technologies, 2014. 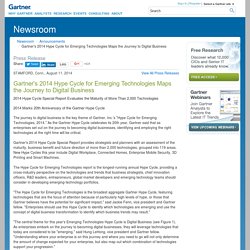 " As the Gartner Hype Cycle celebrates its 20th year, Gartner said that as enterprises set out on the journey to becoming digital businesses, identifying and employing the right technologies at the right time will be critical. Gartner's 2014 Hype Cycle Special Report provides strategists and planners with an assessment of the maturity, business benefit and future direction of more than 2,000 technologies, grouped into 119 areas. 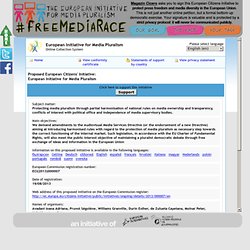 To do that we are collecting 1 million signatures to demand a directive from the European Commission that protects these basic rights. With the #FreeMediaRace we give individuals and organisations a tool to collect signatures in their own name. Those that gather the most signatures will be invited for a presentation in the European Parliament in Brussels! Making sense of too much data.

Tuesday, March 4, 9:30 AM- 5:30 PM, as part of the 2014 iConference at Humboldt University, Berlin. On Memory (Electronic or Otherwise) – Vilém Flusser. By focusing on the moment between Oral and Written culture Flusser calls upon an important historic transition in Human history. All of a sudden the law was not an agreed upon cultural conversation. Instead law became eternally carved in stone, forever stating its dictum upon the culture. In Phaedrus Plato argues that written language is inferior to its spoken counterpart because the written word is dead. Hobohms "Library and Information Science" Blog. Alain Ehrenberg. Zeitgeschichte online - Fachportal für die Zeitgeschichte (ZOL) Wissensgesellschaft – Docupedia.