The Cluetrain Manifesto. What to Consider in #SMsports in 2017. Three Public Relations Mega-Trends in 2017. What does the public relations industry have to look forward to in 2017? 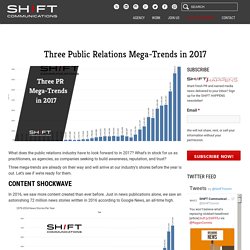 What’s in stock for us as practitioners, as agencies, as companies seeking to build awareness, reputation, and trust? Three mega-trends are already on their way and will arrive at our industry’s shores before the year is out. Let’s see if we’re ready for them. Content Shockwave. PR Pros Must Embrace the PESO Model Spin Sucks. The business world, in the last seven or so years, has been upended with the introduction of social media and access to better data. 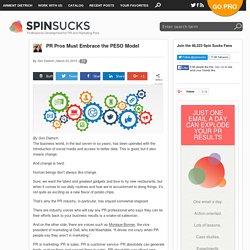 This is good, but it also means change. And change is hard. Human beings don’t always like change. Trends - Edelman Digital. New Clues. #101: Advice to marketers from The Cluetrain Manifesto: David Weinberger. History of Social Media. Long Tail (updated version of original 2004 article) The Long Tail (original article) The Rise and Fall of the Hit (chapter 2) On March 21, 2000, Jive Records released No Strings Attached, the much-anticipated second album from NSync. 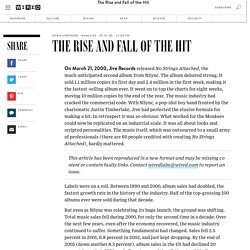 The album debuted strong. It sold 1.1 million copies its first day and 2.4 million in the first week, making it the fastest-selling album ever. It went on to top the charts for eight weeks, moving 10 million copies by the end of the year. The music industry had cracked the commercial code. Chris Anderson: Technology's long tail. Rethinking the Long Tail Theory: How to Define 'Hits' and 'Niches' Using data on movie-rating patterns, new Wharton research challenges current thinking on the Long Tail effect — a widely publicized theory that suggests the Internet drives demand away from hit products with mass appeal, and directs that demand to more obscure niche offerings. 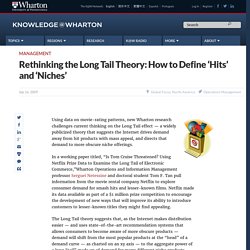 Dialogic Theory. Uses & Gratifications in Social Networking. Social Media and the ‘Spiral of Silence’ A major insight into human behavior from pre-internet era studies of communication is the tendency of people not to speak up about policy issues in public—or among their family, friends, and work colleagues—when they believe their own point of view is not widely shared. 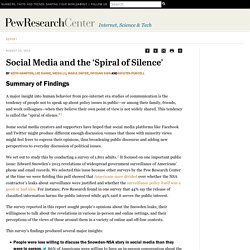 This tendency is called the “spiral of silence.” Some social media creators and supporters have hoped that social media platforms like Facebook and Twitter might produce different enough discussion venues that those with minority views might feel freer to express their opinions, thus broadening public discourse and adding new perspectives to everyday discussion of political issues. Privacy, Free Speech, and 'Blurry-Edged' Social Networks. If You Don’t Have Anything Nice to Say, SAY IT IN ALL CAPS. Everything You Need to Know About Facebook’s Controversial Emotion Experiment.

The closest any of us who might have participated in Facebook’s huge social engineering study came to actually consenting to participate was signing up for the service. 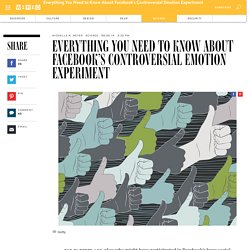 Facebook’s Data Use Policy warns users that Facebook “may use the information we receive about you…for internal operations, including troubleshooting, data analysis, testing, research and service improvement.” This has led to charges that the study violated laws designed to protect human research subjects. But it turns out that those laws don’t apply to the study, and even if they did, it could have been approved, perhaps with some tweaks. Why this is the case requires a bit of explanation. Michelle N. Experimental evidence of massive-scale emotional contagion through social networks. Author Affiliations Edited by Susan T. 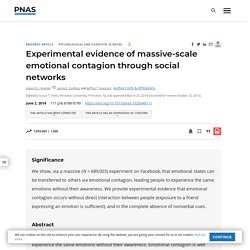 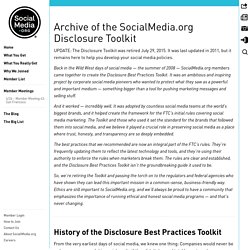 It was last updated in 2011, but it remains here to help you develop your social media policies. Disclosure Toolkit. Behaviorgraphics: Discovering the "Me" in Social Media. InShare958 Social media is a deeply personal ecosystem that I lovingly refer to as the EGOsystem. 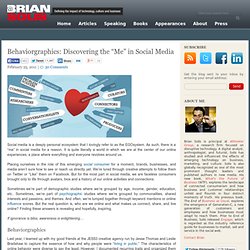 As such, there is a “me” in social media for a reason. It is quite literally a world in which we are at the center of our online experiences, a place where everything and everyone revolves around us. Placing ourselves in the role of this emerging social consumer for a moment, brands, businesses, and media aren’t sure how to see or reach us directly yet. We’re lured through creative attempts to follow them on Twitter or “Like” them on Facebook.

Understand Your Customers' Social Behaviors. Socialgraphics. Companies should have a ‘Customer Strategy’ not a ‘Twitter or Facebook Strategy’. 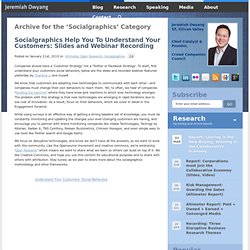 Social Technographics Ladder – Keeping it Social. The Social Technographic Profile is t. Virtual Worlds, Disability, and New Cultures of the Embodied Self. I was late…again. Story of my life. I love to be busy and engaged. I had promised I would come and talk about social stuff we might do at Ethnographia Island. I promised that a week or two ago, or somewhere around then. Who knows – my virtual world moves sometimes at the speed of light. Making a Case for Virtual Healthcare Communications.

To cite this articleDavis, D. Z. (2014). Finding Healthcare Support in Online Communities. The PDF file you selected should load here if your Web browser has a PDF reader plug-in installed (for example, a recent version of Adobe Acrobat Reader). If you would like more information about how to print, save, and work with PDFs, Highwire Press provides a helpful Frequently Asked Questions about PDFs. Alternatively, you can download the PDF file directly to your computer, from where it can be opened using a PDF reader.

To download the PDF, click the Download link above. Hype Cycle Research Methodology. Why Is 'Second Life' Still a Thing? Seven Ways Tech Is Changing Journalism and News Consumption. During the past decade, digital technology has dramatically changed the way we consume - and create - news and information. This pace - as discussed last week at the annual Global Editors Network conference (GEN Summit 2016) - shows no sign of abating. Press release Journalism, Media and Technology Predictions 2017 0. Five years after the Arab Spring, how does the Middle East use social media? In 2011, the Arab Spring rocked many parts of the Middle East.

Regime change in Tunisia, Egypt and Libya saw the departure of long-established – seemingly untouchable – political leaders and inspired ripples of protest and disquiet in many neighboring Arab nations. The tumultuous ramifications are still playing out in many countries across the region. 10 Social Media Lessons from the Middle East in 2016. Stock image. 19 Action Steps to Take Whenever You Publish a New Blog Post. You just wrote your latest masterpiece and hit “publish.” Top 25 Social Media Monitoring Tools. The Ultimate Cheat Sheet of Photo & Image Sizes on Facebook, Twitter, LinkedIn & Other Social Networks [Infographic] When you're designing cover photos, graphics, and other social media assets, sometimes knowing the bare bones image dimensions isn't enough.

What if you wanted to place text or an arrow on your Facebook cover photo without it getting covered by the profile photo? And what about the shared link thumbnails on Facebook or in-stream photos on Twitter ... how big should those be? Download pre-sized cover photo templates for Facebook, Twitter, LinkedIn, Google+, and YouTube for free here. 2017 Social Media Image Sizes Cheat Sheet. 40+ Best Free Social Media Marketing Tools.