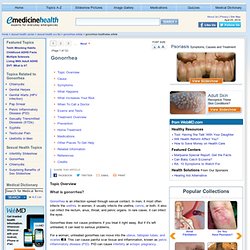 Gonorrhea is an infection spread through sexual contact. In men, it most often infects the urethra. In women, it usually infects the urethra, cervix, or both. It also can infect the rectum, anus, throat, and pelvic organs. Gonorrhea does not cause problems if you treat it right away. For a woman, untreated gonorrhea can move into the uterus, fallopian tubes, and ovaries .

Sometimes gonorrhea is called the clap, drip, or GC. What causes gonorrhea? A certain kind of bacteria causes gonorrhea. A woman who is pregnant can pass the infection to her newborn during delivery. What are the symptoms? Many people have no symptoms, so they can pass gonorrhea to their sex partners without knowing it. If there are symptoms, they may include: Pain when you urinate.Abnormal discharge from the penis or vagina. Gonorrhea infection in the throat also usually does not cause symptoms. Scientists find first superbug strain of gonorrhea. Strain of gonorrhea that infects millions each year 'could soon be untreatable', says World Health Organisation. Babies born to gonorrhea-infected mothers have 50 per cent chance of being blind106million new cases of disease annually - the second most common STD after chlamydiaScientists blame overuse of antibiotics coupled with bacteria's astonishing ability to adaptDoctors in Britain switching to using combination of antibiotics over longer period of timeClose to becoming a superbug as researchers admit they can do little to halt its rapid spread By Chris Hanlon Published: 20:05 GMT, 6 June 2012 | Updated: 07:57 GMT, 7 June 2012 A 'super' strain of untreatable gonorrhea is sweeping developed countries across the world including Britain and Northern Ireland. 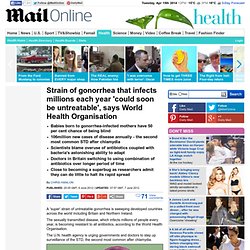 The sexually transmitted disease, which infects millions of people every year, is becoming resistant to all antibiotics, according to the World Health Organisation. The U.N. health agency is urging governments and doctors to step up surveillance of the STD, the second most common after chlamydia. The link between GM cotton and antibiotic-resistant gonorrhea - scientists sound the alarm. What will we learn next? 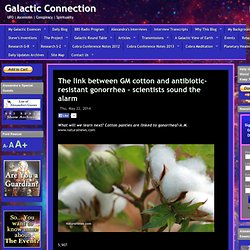 Cotton panties are linked to gonorrhea? -A.M.www.naturalnews.com Tuesday, May 20, 2014 by: Carolanne WrightTags: GM cotton, antibiotic resistance, gonorrhea(NaturalNews) We may not associate much risk with seemingly “inedible” genetically modified crops like cotton, but the dangers are very real. GM cotton actually poses a triple threat — Bt pollen, widespread use of cottonseed oil in the food industry and cottonseed cake fed to animals. Researchers are now concerned that Monsanto’s genetically modified cotton crops — grown around the world, from India to the United States, Europe, Australia and South America — are creating antibiotic-resistant superbugs that would make gonorrhea, and possibly tuberculosis, untreatable.The history of Monsanto’s genetically modified cotton is far from the “white gold revolution” purported by the controversial biotech corporation.

Doctors warn that antibiotic-resistant strain of gonorrhea could be 'worse than AIDS' Gonorrhea is the second most commonly reported sexually transmitted disease in the U.S.A growing number of cases are being reported globally of an antibiotic-resistant strain known as HO41It has been listed as a superbug and doctor are warning it has the potential to become very dangerous very quicklyGonorrhea is especially common amongst young people aged 15-24 By Daily Mail Reporter Published: 13:49 GMT, 1 May 2013 | Updated: 13:49 GMT, 1 May 2013 Doctors are warning that an antibiotic-resistant strain of gonorrhoea, now considered a superbug, has the potential to be as deadly as the AIDS virus. 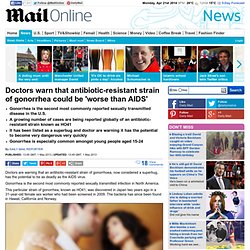 Gonorrhea is the second most commonly reported sexually transmitted infection in North America. This particular strain of gonorrhea, known as HO41, was discovered in Japan two years ago in a 31-year-old female sex worker who had been screened in 2009. In a bid to avoid contracting gonorrhea, in particular the HO41 strain, people are encouraged to practice safe sex. Www.cdc.gov/nchhstp/newsroom/docs/Gonorrhea-Treatment-Guidelines-FactSheet.pdf. Hepatitis A: Healthwise Medical Information on eMedicineHealth. Topic Overview What is hepatitis A? 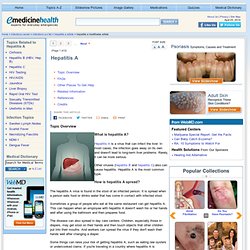 Hepatitis A is a virus that can infect the liver. In most cases, the infection goes away on its own and doesn't lead to long-term liver problems. Rarely, it can be more serious. Other viruses (hepatitis B and hepatitis C) also can cause hepatitis. How is hepatitis A spread? The hepatitis A virus is found in the stool of an infected person. Sometimes a group of people who eat at the same restaurant can get hepatitis A. The disease can also spread in day care centers. Some things can raise your risk of getting hepatitis A, such as eating raw oysters or undercooked clams. You may also be at risk if you live with or have sex with someone who has hepatitis A.

What are the symptoms? After you have been exposed to the virus, it can take from 2 to 7 weeks before you see any signs of it.