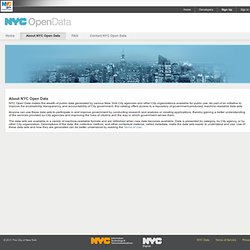 As part of an initiative to improve the accessibility, transparency, and accountability of City government, this catalog offers access to a repository of government-produced, machine-readable data sets. Anyone can use these data sets to participate in and improve government by conducting research and analysis or creating applications, thereby gaining a better understanding of the services provided by City agencies and improving the lives of citizens and the way in which government serves them. The data sets are available in a variety of machine-readable formats and are refreshed when new data becomes available. Data is presented by category, by City agency, or by other City organization. Descriptions of the data, the collection method, and other contextual material, called metadata, make the data sets easier to understand and use.

For more than 50 years it has provided an institutionalised framework for supreme audit institutions to promote development and transfer of knowledge, improve government auditing worldwide and enhance professional capacities, standing and influence of member SAIs in their respective countries. In keeping with INTOSAI's motto, 'Experientia mutua omnibus prodest', the exchange of experience among INTOSAI members and the findings and insights which result, are a guarantee that government auditing continuously progresses with new developments. INTOSAI is an autonomous, independent and non-political organisation.

About us. Role The National Audit Office (NAO) scrutinises public spending on behalf of Parliament. 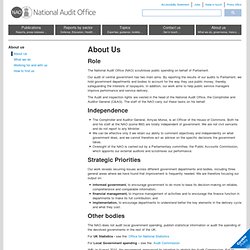 Our audit of central government has two main aims. By reporting the results of our audits to Parliament, we hold government departments and bodies to account for the way they use public money, thereby safeguarding the interests of taxpayers. In addition, our work aims to help public service managers improve performance and service delivery. Public Expenditure Statistical Analyses - HM Treasury.

PESA Objectives Public Expenditure Statistical Analyses (PESA) is the regular publication of information on government spending. PESA has two main objectives and is therefore based on two datasets: Budgets: To provide information on government spending plans and outturn expressed in terms of budgeting aggregates. Office for Budget Responsibility » What we do. The Office for Budget Responsibility was created in 2010 to provide independent and authoritative analysis of the UK’s public finances. 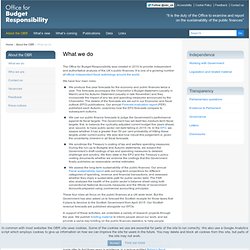 It is one of a growing number of official independent fiscal watchdogs around the world. We have four main roles: We produce five-year forecasts for the economy and public finances twice a year. The forecasts accompany the Chancellor’s Budget Statement (usually in March) and his Autumn Statement (usually in late November) and they incorporate the impact of any tax and spending measures announced by the Chancellor. The details of the forecasts are set out in our Economic and fiscal outlook (EFO) publications. OECD - Performance and accountability: Making government work. Whether setting targets or timetables, governments want to become more efficient. 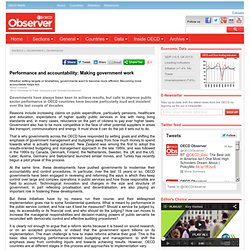 Becoming more accountable helps too. Reasons include increasing claims on public expenditure, particularly pensions, healthcare and education, expectations of higher quality public services in line with rising living standards and, in many cases, reluctance on the part of citizens to pay ever higher taxes. Government also has to be more competitive in the face of other potential suppliers in areas like transport, communications and energy. It must show it can do the job it sets out to do. That is why governments across the OECD have responded by setting goals and shifting the emphasis of government management and budgeting away from how much money to spend towards what is actually being achieved. At the same time, these developments have pushed governments to modernise their accountability and control procedures. Methods of implementing these plans also differ considerably from one country to another.