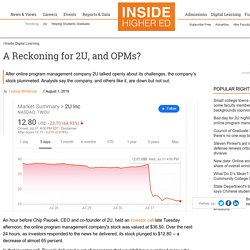 Over the next 24 hours, as investors responded to the news he delivered, its stock plunged to $12.80 -- a decrease of almost 65 percent. In that investor call, Paucek delivered a set of messages that wouldn't have surprised many who watch the online education space closely. Online program management is a difficult business to be in. Online education is increasingly competitive, student acquisition and marketing costs are going up, and the regulatory landscape is becoming more complex. Story continued below… The core business for 2U -- helping selective institutions such as the University of Southern California launch large online graduate programs -- isn’t growing as hoped.

Retention. For Profits and Not For-Profit. How to Make Digital Learning Work in Seven Easy Steps - uncompromisingEDU. The Boston Consulting Group and Arizona State University Foundation recently released a case-study investigation into the ROI (return on investment) of online learning. 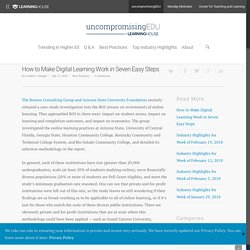 They approached ROI in three ways: impact on student access, impact on learning and completion outcomes, and impact on economics. The group investigated the online learning practices at Arizona State, University of Central Florida, Georgia State, Houston Community College, Kentucky Community and Technical College System, and Rio Salado Community College, and detailed its selection methodology in the report. Private colleges go west for students, don't find them yet. Six Millennial Suggestions on Surviving Higher Ed Tax Policy - Welcome to Encoura. While it may feel like the distant past, let’s take a moment to reflect on where we were just a few short weeks ago as 2017 came to a close. 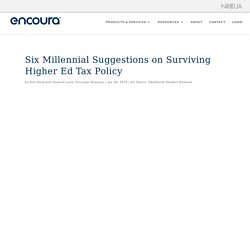 At that time, the near constant media coverage of higher ed tax reform negotiations was like a 24-hour storm team covering an unpredictable hurricane as the event of the century. The interest deduction for student loans will be disallowed! Graduate tuition waivers will be considered taxable income! The sky is falling! Oh, wait. In the end, the final tax reform bill put these controversial changes aside. Finding the ROI of Online Programs. Online Learning Page 2 of 2 Finding the ROI of Online Programs. 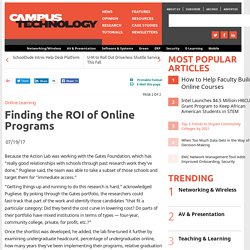 Advice for faculty members about overcoming resistance to teaching online (essay) At nearly all colleges and universities, online education is almost never mentioned in academic rules that judge faculty members and determine if they advance. 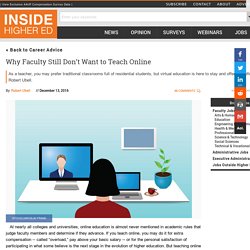 If you teach online, you may do it for extra compensation -- called “overload,” pay above your basic salary -- or for the personal satisfaction of participating in what some believe is the next stage in the evolution of higher education. But teaching online may not be a wise move to further your academic career. Who Will Guard the Guardians? Accountability in the New Age of Higher Ed Accreditation. By Howard Lurie, Principal Analyst@EVhowardlurie While we’ve seen dashboards measuring everything from student completion rates to library circulation patterns, we’ve yet to come across a tool designed to monitor the organizations empowered to watch over the entire higher education system: institutional accreditors. 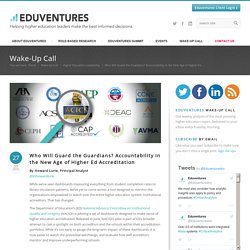 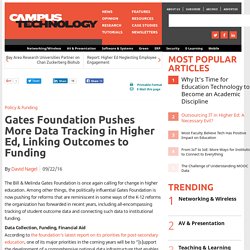 Microsoft LinkedIn and the Looming Shake-Up of Career Services. By Jeffrey Alderson, Principal Analyst@eduventuresjeff Microsoft’s announcement of its intent to purchase LinkedIn for $26.2 billion has inspired countless media outlets and education analysts to speculate about what this will mean for education. 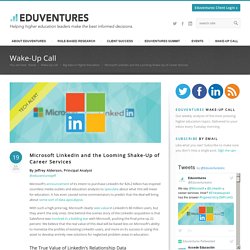 It has even caused some commentators to predict that the deal will bring about some sort of data apocalypse. With such a high price tag, Microsoft clearly sees value in LinkedIn’s 80 million users, but they aren’t the only ones. One behind-the-scenes story of the LinkedIn acquisition is that Salesforce was involved in a bidding war with Microsoft, pushing the final price up 22 percent. Eduventures Student Success Ratings are Here! By Kim Reid, Principal Analyst In June, legions of graduates feel the momentary joy of accomplishment just before the reality of becoming a responsible adult sets in. 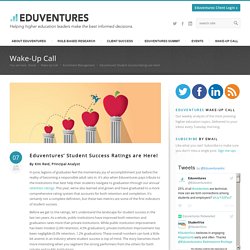 It’s also when Eduventures pays tribute to the institutions that best help their students navigate to graduation through our annual retention ratings. This year, we’ve also learned and grown and have graduated to a more comprehensive rating system that accounts for both retention and completion. It’s certainly not a complete definition, but these two metrics are some of the first indicators of student success.

Before we get to the ratings, let’s understand the landscape for student success in the last ten years. No More Business as Usual: Evidence that For-Profit Schools are Gearing up for Change. By Howard Lurie, Principal Analyst For some for-profit institutions, 2016 has gotten off to a rocky start. 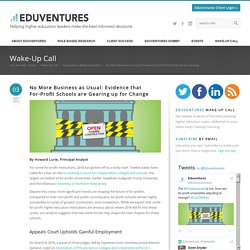 A quarter of schools have increased the use of online adjunct instructors by five percent or more; 31 percent have increased their use by up to five percent. Florida Universities Take System Approach in Addressing Growth of Online. Distance Education Florida Universities Take System Approach in Addressing Growth of Online By Dian Schaffhauser10/27/15. The Big University. Many American universities were founded as religious institutions, explicitly designed to cultivate their students’ spiritual and moral natures. But over the course of the 20th century they became officially or effectively secular. Religious rituals like mandatory chapel services were dropped. Academic research and teaching replaced character formation at the core of the university’s mission. Administrators and professors dropped spiritual language and moral prescription either because they didn’t know what to say or because they didn’t want to alienate any part of their diversifying constituencies.

The humanities departments became less important, while parents ratcheted up the pressure for career training. Learning Colors Collection Vol. 2 - Learn Colours Monster Trucks, Garbage Trucks, Tow Trucks. "The Great Unbundling of Higher Education" In 2003, the iTunes Store unbundled the CD. For the first time, consumers could purchase the songs they wanted rather than the bundle designated by the artist and label. Sales of digital singles soared but overall revenue fell 50 percent in a decade. Prior to this transformation, the business model for the music industry relied on bundling the music that consumers wanted (singles) with the music that they didn't want (the rest of the album). Most Innovative Schools. White House Gives Up on Grading Colleges and Universities. Policy White House Gives Up on Grading Colleges and Universities By Dian Schaffhauser09/14/15 The White House has relinquished its efforts to grade colleges and universities.

The announcement came during President Obama's weekly address this weekend. The ambitious plan to maintain a college scorecard has been replaced with a more modest offering that will publish open data on individual institution costs, graduation rates and student debt and earnings, among other information. Small but Mighty: 4 Small Colleges Thriving in a Disruptive Environment. International Innovation: The Meteoric Rise of Swinburne Online - Eduventures. By Richard Garrett, Chief Research Officer The U.S. online higher education market is the largest and most developed in the world. This doesn’t mean U.S. schools should assume innovation only takes place at home.

The fourth annual Online College Students report is based on a survey of 1,500 recent, current and prospective online students from across the country. Scott_walker_and_the_post_tenure_university_an_apocalyptic_scenario.2. Review agency hits UNC-Chapel Hill with probation. A week after the NCAA leveled five major allegations against UNC-Chapel Hill, an accrediting body has handed down 12 months of probation against the university for failing to meet seven accreditation standards, including academic integrity and control of athletics. Online Degrees Show 'Net Positive' Campus Impact.

Thinking too highly of higher education. Online Course Quality is Not a “Nice To Have.” - Eduventures. State employees eligible to receive tuition discount with WGU Missouri. Enrollment rebounding for some universities. Research shows university evaluations are often misused. This Exclusive Hotel Chain Is Teaching Colleges How To Treat Students. Feds Sue Corinthian Colleges For Pushing More Than $560M In Predatory Loans On Students.

College Scorecard. Their Glut Confines People Without Them To A Shrinking, Low-Pay Sector Of The Market. Campus Technology : March 2014, Page 12. Colleges Risk Becoming Obsolete. Disrupting the Degree? Credentialing in 2023. $60,000 a year for college is actually a discount, says Duke administrator. Higher Education and the Poetry of Ideas  New IPEDS Data: Top 20 online US institutions by sector.