The University for Peace 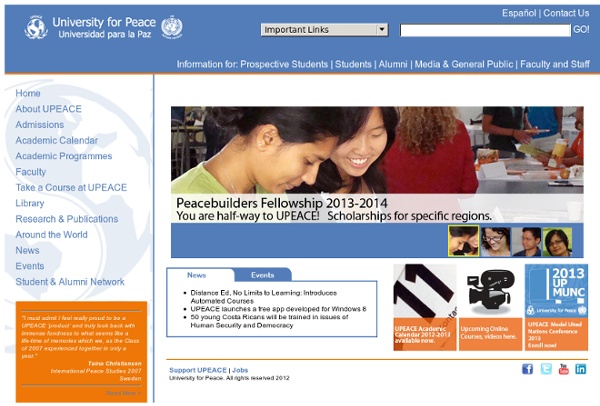 untitled Hem - Diakonia Magna Carta Magna Carta was the first document forced onto a King of England by a group of his subjects, the feudal barons, in an attempt to limit his powers by law and protect their rights. The charter is widely known throughout the English speaking world as an important part of the protracted historical process that led to the rule of constitutional law in England and beyond. The 1215 charter required King John to proclaim certain liberties and accept that his will was not arbitrary—for example by explicitly accepting that no "freeman" (in the sense of non-serf) could be punished except through the law of the land, a right that still exists. The water-meadow at Runnymede is the most likely location at which, on 15 June 1215,[2] King John sealed the Magna Carta, and is the site of the Magna Carta Memorial. It was preceded and directly influenced by the Charter of Liberties in 1100, in which King Henry I had specified particular areas wherein his powers would be limited. Great Charter of 1215[edit]

| Conciliation Resources News Apr 2014 Legitimacy matters for peace. It defines the social and political deals between states and citizens, and local leaders and communities. The new edition of Accord focuses on legitimacy, and the ways that it can help build more equitable and sustainable peace. The Lord's Resistance Army (LRA) has abducted over 3,400 Congolese people since 2008. Mar 2014 After almost twenty years in Islington, Conciliation Resources is moving. For the first time since the end of the Nagorny Karabakh war, a group of Armenian and Azerbaijani journalists are working together on a three-part television documentary series – Parts of a Circle – charting the history of the conflict. A diverse group of participants from across the country are taking part in the Fiji Young Women's Forum. Women at a recent summit in Mindanao, Southern Philippines, called on the Bangsamoro Transition Commission (BTC) to include their views in the drafting of the Basic Law for the new Bangsamoro region. Press releases Comment

United States Constitution The Constitution was adopted on September 17, 1787, by the Constitutional Convention in Philadelphia, Pennsylvania, and ratified by conventions in eleven States. It went into effect on March 4, 1789.[2] Since the Constitution was adopted, it has been amended twenty-seven times. The first ten amendments (along with two others that were not ratified at the time) were proposed by Congress on September 25, 1789, and were ratified by the necessary three-fourths of the States on December 15, 1791.[3] These first ten amendments are known as the Bill of Rights. The Constitution is interpreted, supplemented, and implemented by a large body of constitutional law. History First government The Articles of Confederation and Perpetual Union was the first constitution of the United States of America.[6] It was drafted by the Continental Congress in mid-1776 to late 1777, and formal ratification by all 13 states was completed in early 1781. Congress was paralyzed. Constitutional Convention Ratification