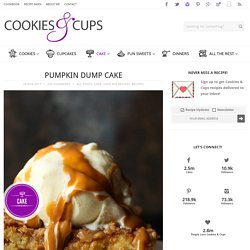 How to Roast Chicken. Crispy Roasted Garlic Chicken Recipe. One of my new endeavors of the year is learning how to coupon. 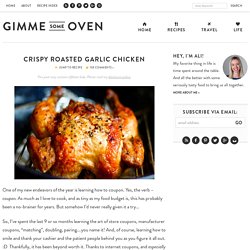 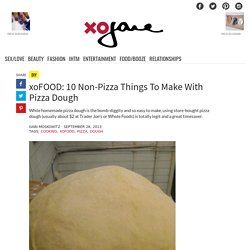 I mean, I literally wrote the book on pizza dough. Southern Vegetable Beef Soup. Noticing that I had some sirloin tip steak in the freezer and deciding on making up a batch of vegetable beef soup today, sure reminded me of my Grandma. 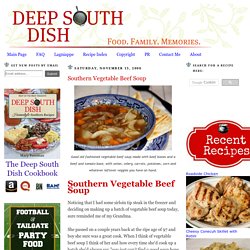 She passed on a couple years back at the ripe age of 97 and boy she sure was a great cook. When I think of vegetable beef soup I think of her and how every time she'd cook up a batch she'd always say "you just can't find a good soup bone anymore. " I remembered as a young gal not at all interested in cooking at the time, I thought, "you can buy bones at the grocery?? " How Low Can You Go? Dal, Chilean Style - The Simple Dollar. In April and May, National Public Radio featured a series on inexpensive gourmet dishes entitled How Low Can You Go?” 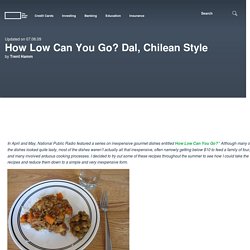 Although many of the dishes looked quite tasty, most of the dishes weren’t actually all that inexpensive, often narrowly getting below $10 to feed a family of four, and many involved arduous cooking processes. I decided to try out some of these recipes throughout the summer to see how I could take the recipes and reduce them down to a simple and very inexpensive form. Dal is a delicious simple Indian dish, often served with rice or wheat flatbread (called “roti”). It’s often a mainstay of vegetarian diets because it provides quite a bit of protein, and the rich flavorings make it palatable to us omnivores as well. Valerie Gaino, of Pichilemu, Chile, submitted a delicious Chilean variant on the dish to the How Low Can You Go contest: First, you simply boil some dry lentils, easily found in the bean section of any grocery store. 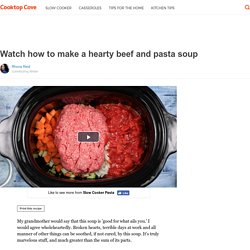 Broken hearts, terrible days at work and all manner of other things can be soothed, if not cured, by this soup. It's truly marvelous stuff, and much greater than the sum of its parts. It's also a forgiving recipe, so don't fret if you don't measure something exactly, or have butter beans instead of cannellini beans; this soup will take it all in it's delicious, warming stride. Preparation Time: 15 minutesCook Time: 8 hoursServes: 6-8 Like Slow Cooker Pasta for more Cooktop Cove Instructions1. 2. 3. 30 minutes before the end, stir in beans (drained and rinsed) and pasta. 4.

Serve piping hot, to cries of great joy. Barbecue Shrimp in the oven or atop the stove? Cooking Creole. I distinctly remember when I was introduced to barbecue shrimp. 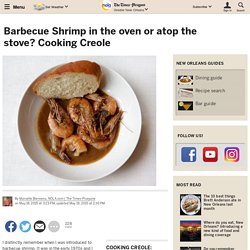 It was in the early 1970s and I was living in the French Quarter of New Orleans. A college buddy, who was also domiciled there, called to say he was bringing supper. I waited for him in my lush courtyard that was shielded from the Maison Blanche employee parking lot by a huge stand of banana trees. New Orleans Barbecue Shrimp. Cecil Morgan’s Clam Dip. When it came to dinner parties at my Grandparents’ house, they always made sure there were some permanent items on the buffet: my Grandpa’s AMAZING smoked salmon (fresh caught from Alaska by him), gherkins and olives in a cute little crystal tray, and clam dip. 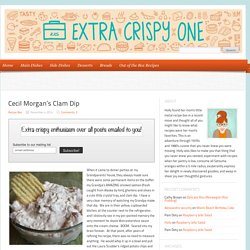 I have a very clear memory of watching my Grandpa make that dip. We are in their yellow, cupboarded kitchen, at the counter next to the refrigerator, and I distinctly see in my pin-pointed memory the very moment he shook Worcestershire sauce onto the cream cheese. BOOM. Cornish Pasties. Roberta Oldham’s Souffle Sandwiches. Tangy Pulled Chicken for Sunday Meal Prep. 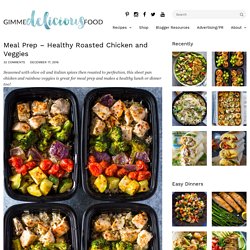 Meal prepping is a must if you go to work, school or like to have healthy meals on hand at all times. Having healthy meals on hand will make your day and week run a lot smoother. This means you wont end up needing to purchase last-minute un-healthy fast food. You can prep the entire weeks meals on the weekend so you’ll always have tasty healthy food at reach. I assure you it’s well worth the extra effort and will also save you a lot of money. This sheet pan roasted chicken and rainbow veggies is a great dish to make if your just starting to meal prep or if you just want easy toss in the oven kind of dinner.

The chicken and veggies are loaded with spices and drizzled with olive oil, then roasted in the oven for 20 minutes or until charred and tender. Ingredients. Garlic Margherita Chicken & Zucchini. 26Oct, 15 Another QUICK Dinner Idea…FULL of flavors the entire FAMILY will LOVE! 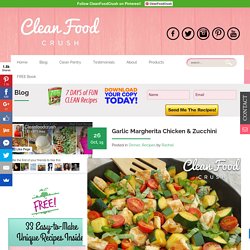 Leave it to eccentric New Orleans; despite the name, there's no barbecue sauce or grill involved (if that's what you're after, see our basic Grilled Shrimp recipe). Serve with lots of hot, crusty bread for mopping up the sauce, and plenty of bibs and napkins to keep everyone tidy as they peel and eat the shrimp with their hands. In New Orleans, head-on, shell-on shrimp are standard; see cajungrocer.com for an online source, or use headless, shell-on shrimp. Cut the lemon in half crosswise, and juice it. New Orleans Style Barbecue Shrimp. 5 stars based on 22 votes Share on TwitterShare on FacebookShare on Pinterest New Orleans Barbecue Shrimp has actually very little to do with barbecue.

Popular in Louisiana, the dish refers to sautéed shrimp in a Worcestershire-spiked butter sauce. Typically made with an insane amount of butter, the shrimp are served shell-on so you eat with your hands. Soups & Broth. 50 Healthy Lunch Ideas for Teachers to Take to School. Teachers all across the country are soon going to be packing in their lunches between lunchroom duty and recess as school starts for the new year. Instead of relying on diet soda and candy bars, we asked our Really Good Teachers on Facebook what their favorite school lunches are. Surprisingly easy, the lunch suggestions given were both helpful and relatively inexpensive. Eating healthy this school year just got easier. 1. “Carrots (or other crunchy veggies), grapes or apple slices, hard boiled eggs, and half a peanut (or almond or sunbutter) sandwich.

20 Cheat Sheets For When You're Trying To Eat A Little Healthier. La hija del sastre BreakoutEDU. Many people have contacted me in the past month to post about my Breakout sessions that I've done in class. Homemade Cream of Chicken Soup. 15 Foods You Can Eat a Lot of and Still Not Gain Weight. Even if you’re crazy about keeping your figure, there are still foods you can eat without limitations.

They’re rich in fiber while being low calorie, satiating you without the risk of gaining weight. We at Bright Side compiled a list of such products. However, you should always make sure that your diet is well balanced with a sensible variety of foods. Sweet Corn Spoon Bread – 12 Tomatoes. While we typically reach for savory side dishes to complement our dinners, it’s so great to find a dish that’s a little bit sweet and a little bit savory, that goes perfectly with just about every meal: sweet corn spoon bread!

While the name might tip you off that it’s a derivative of corn bread, this recipe is so much more than said classic. Homemade Wonton Soup Recipe. Less-Loaded Potato Soup: Recipe Makeover. Mexico in My Kitchen: RECIPES. Traditional home-style meals from Mexico. Mexican food recipes presented in an easy, step-by-step process so that you can cook an authentic Mexican meal in your own kitchen; each post also adds a little background about the history of the recipe and the region of the country where it originated. Sausage, Egg and Spinach Overnight Casserole - Maebells. Okay listen, can we all just agree that casseroles aren’t photogenic foods? They may be easy to prepare and taste delicious, but as far as food photography goes we need to be prepared to set the bar a little lower.

Chinese Sizzling Rice Soup. Mexico in My Kitchen: Green Pozole Soup Guerrero Style. Mexican Heritage Month Guest Post: Our guest today is Nora Ceccopieri, author of the blog “Gusta Usted”. In this post she prepares a Green Pozole that I’m sure you will love: just reading the list of ingredients makes your mouth water. Green Pozole is a typical dish from the state of Guerrero, even though there are many versions in other states in Mexico. This is my own version, this Pozole verde has my own taste with pumpkin seeds (the way they make it in the State of Guerrero) and the addition of spices... Mexico in My Kitchen: Sopa de Fideos con Pollo Receta / Mexican Vermicelli Soup with Chicken and Vegetables.

Mexico in My Kitchen: How to Make a Tasty Milanesa. “Milanesa” refers to a thin cut of meat that is breaded and pan fried, and then served with fried potatoes, a salad, and sometimes rice and beans. Italian stuffed cabbage – smitten kitchen. Prior to November, what I knew of stuffed cabbage rolls were limited to the Jewish/Eastern European variety, which I make the way my mother-in-law does. I hadn’t given it further thought because as far as I was concerned, it was never broken, and needed little improvement, and when there’s little room for me to tinker in the kitchen, I quickly lose interest. Dry brine chicken breasts for juicy results. When you need to turn out a fast, tasty and healthful weeknight dinner, it ought to be so easy to reach for skinless, boneless chicken breasts.