The psychological impact of quarantine and how to reduce it: rapid review of the evidence - The Lancet. Summary The December, 2019 coronavirus disease outbreak has seen many countries ask people who have potentially come into contact with the infection to isolate themselves at home or in a dedicated quarantine facility. 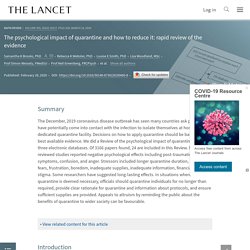 Decisions on how to apply quarantine should be based on the best available evidence. We did a Review of the psychological impact of quarantine using three electronic databases. Of 3166 papers found, 24 are included in this Review. Most reviewed studies reported negative psychological effects including post-traumatic stress symptoms, confusion, and anger. Introduction. 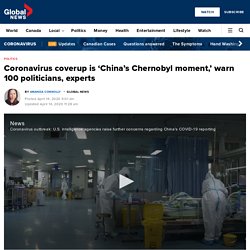 More than 100 international politicians and international policy experts have signed on to the letter, including former Canadian justice minister and human rights advocate Irwin Cotler. READ MORE: Freeland won’t say if Canada has seen U.S. intel flagging Chinese coronavirus data In it, the signatories warn that the coronavirus crisis shows it is more important than ever to raise up and listen to independent voices in China given the regime’s silencing of experts who tried to raise alarm bells. “China’s Chernobyl moment is a self-inflicted wound,” the letter states. “The CCP [Communist Party of China] silenced Chinese doctors who wanted to warn other health professionals during the early stage of the outbreak.”

It goes on to criticize the World Health Organization for bowing to Chinese pressure to downplay the severity of the situation. Story continues below advertisement View link » B.C. tops 1,500 coronavirus cases as province reports 3 new deaths. Posted April 14, 2020 3:52 pm Updated April 14, 2020 6:19 pm Three more people, all of them residents of long-term care homes, have died due to COVID-19 in British Columbia. 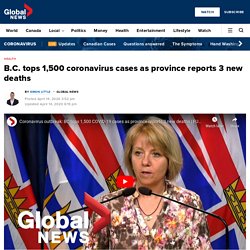 Health officials also reported 27 new confirmed cases of the virus on Tuesday, bringing the province’s total to 1,517. About 60 per cent of all patients have recovered so far, while 134 people are still in hospital — 58 of whom are in intensive care. Bill Gates says a coronavirus vaccine will first go to health care professionals. WHO warns young people they are not 'invincible' amidst coronavirus outbreak The World Health Organization director-general said data from many countries shows adults under age 50 make up a significant amount of patients needing hospitalization. 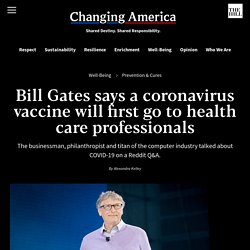 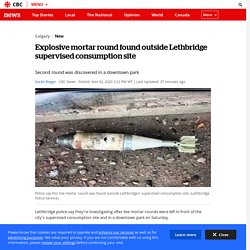 Police said officers responded after a mortar round was found Saturday in a garbage can near the front door of the supervised consumption site at 1016 First Avenue South. The building and parking lot were evacuated as a precaution, and the police explosive disposal unit determined the 82-millimetre mortar round was live. Police had received a report earlier in February of two people in a north Lethbridge neighbourhood who were carrying a backpack that appeared to contain two explosive devices.

Coronavirus Infections Approach 90,000, U.S. Scrambles to Slow Spread: Live Updates. Lee Man-hee, the founding leader of the church at the center of South Korea’s explosive coronavirus outbreak, bowed in supplication at a news conference on Monday and apologized amid growing anger at his handling of the crisis. 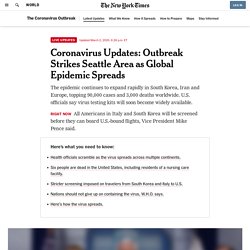 “I have never imagined this kind of thing would happen,” Mr. Lee, 88, said in a choking voice during a nationally televised news conference. “I am still trying to understand how this could happen.” Mr. Lee called the news conference after Seoul and other cities asked prosecutors to investigate him for potential criminal charges, including murder through willful negligence.

Among other things, the church was accused of failing to provide a full list of its members fast enough for the government to track them down for testing. By Monday, South Korea reported more than 4,000 total cases. Mr. Quebec bans religious symbols for state workers in new law. Quebec’s contentious secularism bill banning religious symbols for teachers, police officers and other public servants in positions of authority was voted into law late Sunday. 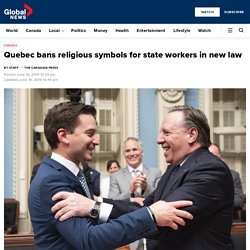 Premier Francois Legault’s government used its majority to push through Bill 21 by a vote of 73 to 35 after applying the mechanism of closure to end debate on the bill prematurely. The Parti Quebecois also voted in favour, while the Liberals and Quebec solidaire were opposed. The bill prohibits public servants in positions of authority from wearing religious symbols on the job.

Its opponents say the law targets religious minorities while the government argues it affirms the Quebecois people’s secular identity. The Coalition Avenir Quebec government introduced last-minute amendments toughening the law, making provisions for a minister to verify that it is being obeyed and to demand corrective measures if necessary. Story continues below advertisement. Greta Thunberg turns 17 today. Here's how she started a global climate movement in just 18 months.