Brian Deer - vaccine falsehoods and repercussions. Andrew Wakefield falsely linked the MMR vaccine with autism 22 years ago and the repercussions are still being felt today. 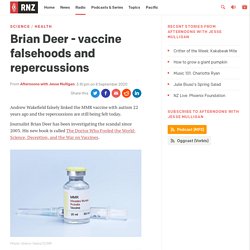 Journalist Brian Deer has been investigating the scandal since 2003. His new book is called The Doctor Who Fooled the World: Science, Deception, and the War on Vaccines. Photo: Sherry Yates/123RF Banned from medicine, thanks to Deer's discoveries, Wakefield fled to the United States to and is now busy on the US anti-vaccine circuit.

Wakefield was an unknown researcher in the 1990s looking at a possible link between measles and Crohn’s disease, Deer told Jesse Mulligan. That idea didn’t go very far as measles was declining because of vaccination and yet Crohn’s disease was increasing. “So, he shifted over to measles vaccines and started to argue that measles vaccine caused Crohn’s disease.” Wakefield was then approached by a firm of lawyers. “They invited him to move from bowel disease, which was his interest, to brain damage which was their interest.” -19: Moderna, Pfizer start decisive vaccine trials, eye year-end launches. Moderna Inc and Pfizer Inc launched two 30,000-subject trials of Covid-19 vaccines that could clear the way for regulatory approval and widespread use by the end of this year, the companies said on Monday (US local time). 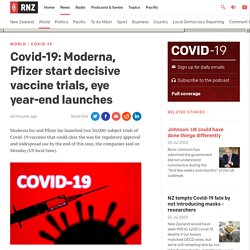 Pfizer aims for about 1.3bn doses by the end of 2021, and Moderna aims for 500m to 1bn doses a year beginning 2021. Photo: AFP The trials, both announced on Monday, are the first late-stage studies supported by the Trump administration's effort to speed development of measures against the novel coronavirus, adding to hope that an effective vaccine will help end the pandemic. Moderna stock rose 9 percent. Pfizer shares rose 1.6 percent in afterhours trade and its partner BioNTech, which developed the vaccine, rose 4.2 percent. Risk, uncertainty and fear of failure: Why scientists aren't celebrating a coronavirus vaccine yet.

Siouxsie Wiles & Toby Morris: the race for a Covid-19 vaccine, explained. Well over 150 vaccine candidates for Covid-19 are in development, and they take a myriad of forms. 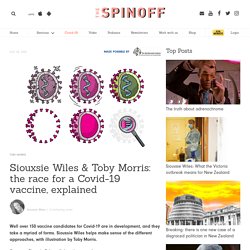 Siouxsie Wiles helps make sense of the different approaches, with illustration by Toby Morris. Where We're at with Vaccines and Treatments for COVID-19. Scientists around the world are working on potential treatments and vaccines for the new coronavirus disease known as COVID-19.Several companies are working on antiviral drugs, some of which are already in use against other illnesses, to treat people who already have COVID-19.Other companies are working on vaccines that could be used as a preventive measure against the disease. 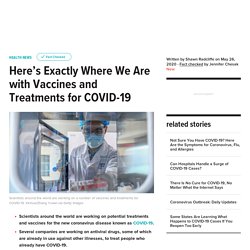 With confirmed COVID-19 cases worldwide surpassing 4.3 million and continuing to grow, scientists are pushing forward with efforts to develop vaccines and treatments to slow the pandemic and lessen the disease’s damage. Some of the earliest treatments will likely be drugs that are already approved for other conditions, or have been tested on other viruses. “People are looking into whether existing antivirals might work or whether new drugs could be developed to try to tackle the virus,” said Dr. Bruce Y. Lee, a professor at the CUNY Graduate School of Public Health & Health Policy. Dr. Remdesivir Kaletra Favipiravir.

Dealing with vaccine hesitancy in times of coronavirus. OPINION: Only a year ago the world was shocked by an outbreak of measles – a disease thought to have been eradicated for decades thanks to large-scale vaccination programmes. 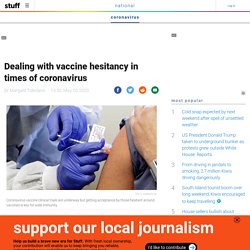 It was distressing to read that 70 Samoan children died in 2019 partly because too many parents became sceptical and refused to get their children a measles shot. How to Make a COVID-19 Vaccine. -19 vaccine two years away, and could be NZ-made - research leader. A Covid-19 vaccine is being described as the Everest of medicine, and the race is on to beat corporate interests to the top of the mountain, Professor Graham Le Gros from Malaghan Institute says. 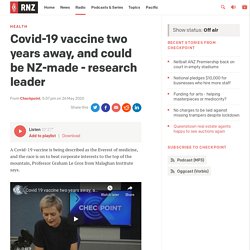 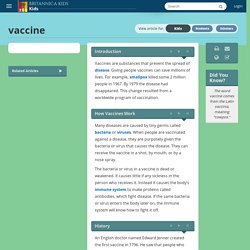 He saw that people who got the mild disease called cowpox rarely got smallpox, which is more serious. He did experiments to find out why. He scratched material from a cowpox sore into the skin of a healthy boy. The boy got cowpox. Then Jenner scratched material from a smallpox sore into the boy’s arm. The French scientist Louis Pasteur was another important researcher. Since Pasteur’s time, scientists have produced vaccines against many diseases. How Vaccines Work. How Vaccines Work A vaccine works by training the immune system to recognize and combat pathogens, either viruses or bacteria. 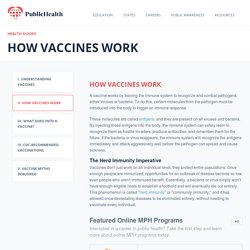 To do this, certain molecules from the pathogen must be introduced into the body to trigger an immune response. These molecules are called antigens, and they are present on all viruses and bacteria. By injecting these antigens into the body, the immune system can safely learn to recognize them as hostile invaders, produce antibodies, and remember them for the future. New poll shows 16% of New Zealanders don’t want to be Covid-19 vaccinated. A new survey suggests 16% of us don’t want to receive a Covid-19 vaccine. 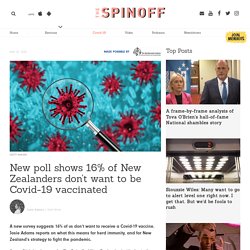 Josie Adams reports on what this means for herd immunity, and for New Zealand’s strategy to fight the pandemic. The race for coronavirus vaccines: a graphical guide. More than 90 vaccines are being developed against SARS-CoV-2 by research teams in companies and universities across the world. 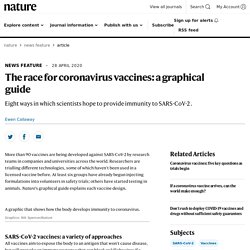 Researchers are trialling different technologies, some of which haven’t been used in a licensed vaccine before. At least six groups have already begun injecting formulations into volunteers in safety trials; others have started testing in animals.