Twitter. Antarctica reached a new record-high temperature of 65 degrees this week. Dave Throup sur Twitter : "Meanwhile these July satellite pics show the extent of smoke from wildfires across Alaska and Russia. These fires are releasing tonnes of CO2, absorbing sunlight & further heating the atmosphere and depositing soot reducing the. NWS Anchorage sur Twitter : "The Anchorage International Airport has just reached 89 degrees. The all time record high temperature for #Anchorage has officially been broken. The previous record of 85 degrees was set on June 14, 1969 (period of record 1952.

An icecap 1987-2018, Nunavut, Canada □□ GIF. Jennifer Gerholdt sur Twitter : "Sobering photo capturing a changing climate in the Arctic, with temps 40 degrees above normal this month. Sled dogs run on top of the melt water over the Greenland ice sheet as far as you can see. Photo credit: Steffen Ols. The Greenland ice sheet is currently going through a major melting this week, covering almost half its surface — unprecedented in its extent for this early in the year. This has not happened before.… Arctic sea ice volume by month, 1979 through May 2019. data source. Scientists thought it would be the last summer sea ice to melt. □ Learn more about the dangers of melting ice @yglvoices #greenland19 #environment…

At the moment, nearly all of the 4+ multi-year #Arctic sea ice is gone (~1.2%)... Latest update from @NSIDC at. *****#Arctic sea ice extent continues as a record low for the date. It is ~250,000 km² below the prior record low, which was set just last year.… *****Global, Arctic, and Antarctic sea ice area barrel - March 2019 #GlobalWarming #ClimateChange… "Why is the Arctic sea ice declining so significantly? Research shows a strong and direct correlation with CO2 emissions. Blob of above freezing air penetrating through the Bering Strait. *****Kevin Pluck sur Twitter : "Anyone involved in a climate Gish Gallop involving Arctic sea ice would likely have seen this image. I have updated it and put it in context of current conditions. You may download the original MP4 here. *****Chasing lasts: An all-female expedition to the North Pole.

The Arabian Desert may not be everyone’s first choice when training for a ski expedition to the North Pole, but Felicity Aston explains why it was the perfect location for her international team of novices I’m not chasing “firsts” anymore,’ said one polar guide. 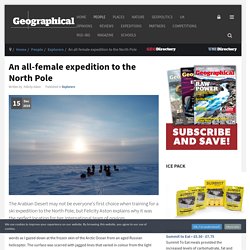 ‘I’m chasing “lasts”.’ I recalled his words as I gazed down at the frozen skin of the Arctic Ocean from an aged Russian helicopter. The surface was scarred with jagged lines that varied in colour from the light grey of newly formed ice to the jet black of open water. Since satellite observations began in 1979, Arctic Ocean sea ice has been decreasing by 13 per cent every decade. Global, Arctic and Antarctic sea ice area barrel November 2018 #GlobalWarming #ClimateChange… Global, Arctic and Antarctic sea ice area spiral November 2018 #GlobalWarming #ClimateChange… Global sea ice area spiral November 2018. #GlobalWarming #ClimateChange… Arctic’s strongest sea ice breaks up for first time on record. The oldest and thickest sea ice in the Arctic has started to break up, opening waters north of Greenland that are normally frozen, even in summer. 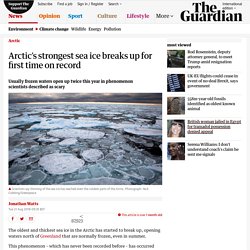 This phenomenon – which has never been recorded before – has occurred twice this year due to warm winds and a climate-change driven heatwave in the northern hemisphere. One meteorologist described the loss of ice as “scary”. Others said it could force scientists to revise their theories about which part of the Arctic will withstand warming the longest. The sea off the north coast of Greenland is normally so frozen that it was referred to, until recently, as “the last ice area” because it was assumed that this would be the final northern holdout against the melting effects of a hotter planet. But abnormal temperature spikes in February and earlier this month have left it vulnerable to winds, which have pushed the ice further away from the coast than at any time since satellite records began in the 1970s. … we have a small favour to ask. Sweden's highest point set to lose title as glacier melts.

#Map shows the difference in average temperature in Europe between May 2018 and the reference period 1981-2010 from C3S (Copernicus Climate Change Service). Source. WEATHER/ METEO WORLD sur Twitter : "Temperatures approaching the mid 30s across northern Norway yesterday afternoon 18th July! Very unusual for the Lapland part of the country. Temperatures have been up to 10c above average! #Heatwave #Europe #extremeweat. This is crazy.… 28 °C at Alta airport, Norway (70.0°N) near local midnight at 21:00 UTC! WOW! Map: @meteociel… The grass in Denmark is brown after no rain in weeks. Persistent weather extremes are an emerging signature of Arctic climate change.… PSR Environment sur Twitter : "#Arctic heatwave sends temperature spiking 30 degrees F above normal, melting #seaice and further amplifying arctic warming. This is what manmade #climatechange looks like! Via #ClimateChangeIsReal… h. The Antarctic Report sur Twitter : "Compared to 30 yrs ago, Arctic sea ice is now mostly first-year ice. Older ice is generally thicker than newer ice, and therefore more resilient to heat; as it disappears, the newer ice left behind is more vulnerable to.

Simon Kuestenmacher sur Twitter : "Right now a Texas-sized expanse of sea ice is missing from the Bering Sea. New record lows have been set for the past 80 days in a row. There is an animated version of the #map here. A truly shocking moment: Multi-year sea ice is "essentially gone. + here's the full animation.… Climate emergency: Half of Bering Sea ice vanishes in 2 weeks.