Siberian Heatwave? The Summer Of 1917 Was Hotter! By Paul Homewood You cannot fail to recall the neurotic freaking out over last summer’s Siberian heatwave, when a new record temperature for the Arctic of 38C was set at Verhojansk: The event was one of last year’s main climate poster children, along with wildfires. 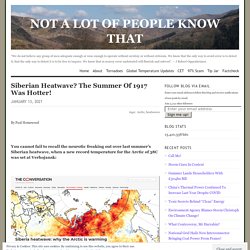 Each year, the climate establishment pick on one or two unusual weather events, in an attempt to convince us all that the planet is quickly spinning out of control. To most people, such temperatures are unheard of in the Arctic, as they naturally assume the region is frozen all year round. As I inconveniently pointed out at the time, the new record of 38.0C was only 0.7C higher than recorded in the same location in 1988.

But that was only one day. Data from NASA GISS confirms that, while it was unusually warm there last year, the hottest summer was actually way back in 1917: Summer temperatures at Verhojansk can clearly swing wildly from year to year, depending on meteorological conditions. Like this: Like Loading... CLAIM: 100 degrees in Siberia? 5 ways the extreme Arctic heat wave follows a disturbing pattern. This essay from director of NSIDC, Mark Serreze, is provided for reference. 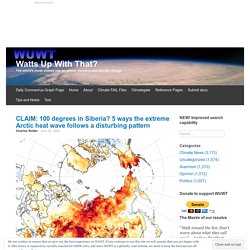 You may remember Serreze who once said “the Arctic is screaming” while botching and then backpedaling on claims of “ice free summers” on the near horizon for the Arctic that never happened. Give it all the consideration it is due. For some perspective, see my article on a previous 100 degree event above the Arctic circle over 100 years ago. Arctic’s ‘Hottest Day’? Not So Fast. Guest post by Michael Kile, Consider the media reaction to an alleged 38C reading on June 20, 2020 – “around 100 degrees Fahrenheit on the first day of summer” – at Verkhojansk, a Russian town ten kilometers inside the Arctic Circle (66°33′48.1″ north latitude), population about one thousand. 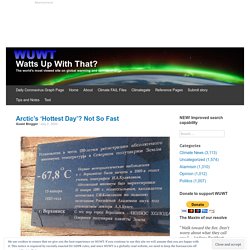 It was like striking a match in a room full of hydrogen at the Hyperbole Club. Remember when we were told: “The Arctic Is On Fire, and We Should all Be Terrified”? It’s SNOWING there now. From the “weather is not climate”, you идиот department comes this about face by climate change nature. 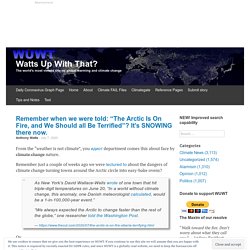 Remember just a couple of weeks ago we were lectured to about the dangers of climate change turning towns around the Arctic circle into easy-bake ovens? As New York’s David Wallace-Wells wrote of one town that hit triple-digit temperatures on June 20, “In a world without climate change, this anomaly, one Danish meteorologist calculated, would be a 1-in-100,000-year event.” Siberian Heatwave–Climate Or Weather? By Paul Homewood h/t Patsy Lacey The Conversation has now got involved in the Arctic heatwave scare, with this article by Jonathan Bamber, Professor of Physical Geography, University of Bristol : On the eve of the summer solstice, something very worrying happened in the Arctic Circle. 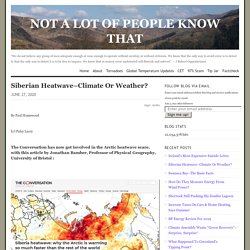 For the first time in recorded history, temperatures reached 38°C (101°F) in a remote Siberian town – 18°C warmer than the maximum daily average for June in this part of the world, and the all-time temperature record for the region. New records are being set every year, and not just for maximum temperatures, but for melting ice and wildfires too. All that heat has consequences. The world's most viewed site on global warming and climate change. Scientists Panic, As Arctic Is 0.4F Warmer Than In 1915! By Paul Homewood h/t Patsy Lacey The Arctic is thought to have recorded its hottest ever temperature of 100.4F (38C) in Siberia, an astonishing 32F (18C) above the normal level for this time of year. 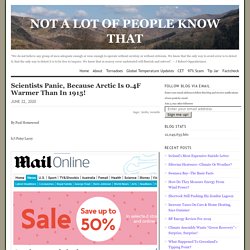 The mercury shot up to the unprecedented level in Verkhoyansk, 3,000 miles east of Moscow, as the region endures a summer heatwave. Scientists had predicted the Arctic wouldn’t reach these levels until 2100, meaning it is warming 80 years faster than previously thought. If the record is confirmed it will represent a new high. Climate Change? Temperature Hits 100 Degrees Above Arctic Circle, Just Like 100 Years Ago. The Left’s obsession with Russia continues – This time it’s a high temperature record. 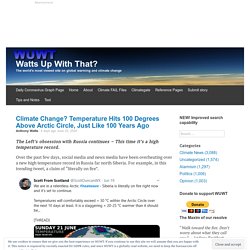 Over the past few days, social media and news media have been overheating over a new high temperature record in Russia far north Siberia. NOAA Relies on ‘Russian Collusion’ to Claim January Was Hottest Month on Record. Other data shows the USA wasn’t even close to a record. 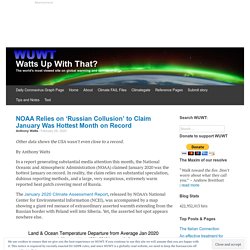 By Anthony Watts In a report generating substantial media attention this month, the National Oceanic and Atmospheric Administration (NOAA) claimed January 2020 was the hottest January on record. In reality, the claim relies on substantial speculation, dubious reporting methods, and a large, very suspicious, extremely warm reported heat patch covering most of Russia. The January 2020 Climate Assessment Report, released by NOAA’s National Center for Environmental Information (NCEI), was accompanied by a map showing a giant red menace of extraordinary asserted warmth extending from the Russian border with Poland well into Siberia.

Yet, the asserted hot spot appears nowhere else. Figure 1: Map of temperature departure provided by NOAA/NCEII.