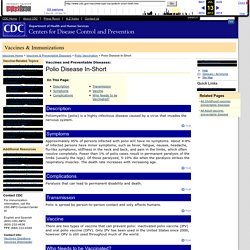 Symptoms Approximately 95% of persons infected with polio will have no symptoms. About 4-8% of infected persons have minor symptoms, such as fever, fatigue, nausea, headache, flu-like symptoms, stiffness in the neck and back, and pain in the limbs, which often resolve completely. Complications Paralysis that can lead to permanent disability and death. Transmission Polio is spread by person-to-person contact and only affects humans. Polio. Pathogens: Twenty-Eight Years of Poliovirus Replication in an Immunodeficient Individual: Impact on the Global Polio Eradication Initiative. Abstract There are currently huge efforts by the World Health Organization and partners to complete global polio eradication. 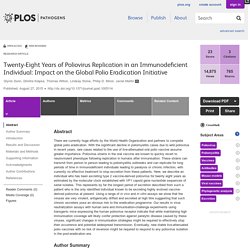 With the significant decline in poliomyelitis cases due to wild poliovirus in recent years, rare cases related to the use of live-attenuated oral polio vaccine assume greater importance. Poliovirus strains in the oral vaccine are known to quickly revert to neurovirulent phenotype following replication in humans after immunisation. These strains can transmit from person to person leading to poliomyelitis outbreaks and can replicate for long periods of time in immunodeficient individuals leading to paralysis or chronic infection, with currently no effective treatment to stop excretion from these patients.

Here, we describe an individual who has been excreting type 2 vaccine-derived poliovirus for twenty eight years as estimated by the molecular clock established with VP1 capsid gene nucleotide sequences of serial isolates. Author Summary. The Polio Vaccine Doesn’t Stop Polio. We’ve almost eradicated polio. Ironically, a big threat now is vaccines. The world is closer than ever to eradicating polio, the horrible paralysis-inducing disease that primarily infects children. 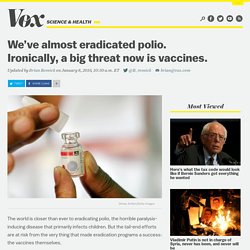 But the tail-end efforts are at risk from the very thing that made eradication programs a success: the vaccines themselves. "Sooner or later you get to the point — in theory you get to the point — where all the [polio] cases in the world are caused by the vaccine," Philip Minor, the head of virology at National Institute for Biological Standards and Control in the United Kingdom, tells me.

"So you are basically using the vaccine to protect against the vaccine. And that is just ludicrous, isn’t it? " A drop in the bucket: Polio campaigns fail because of malnutrition. More cases are report­ed in Pakist­an than all other countr­ies combin­ed. 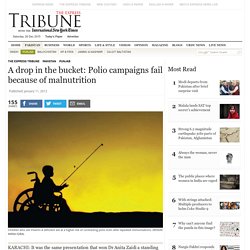 Children who are Vitamin A deficient are at a higher risk of contracting polio even after repeated immunisations. DESIGN: AMNA IQBAL It was the same presentation that won Dr Anita Zaidi a standing ovation at the Tropical Society meeting in Philadelphia last month. But in Pakistan, at the auditorium of the Aga Khan University Hospital (AKUH) on Monday, she was met by silence, dejected expressions and sympathetic nods. In 2011, Pakistan reported 189 polio cases, 45 higher than 144 in 2010. 60 Lab Studies Now Confirm Cancer Link to a Vaccine You Probably Had as a Child. Dr. 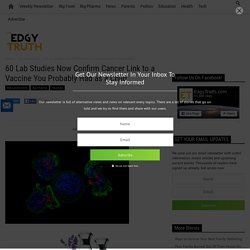 Maurice Hilleman made astounding revelations in an interview that was cut from The Health Century — the admission that Merck drug company vaccines had been injecting dangerous viruses into people worldwide. Bear in mind that Dr. Hilleman was the developer of Merck’s vaccine program. He developed over three dozen vaccines, more than any other scientist in history.

He was a member of the U.S. Photo by National Institutes of Health (NIH) March 5, 1961 - The Truth About the Polio Vaccines. Dr. 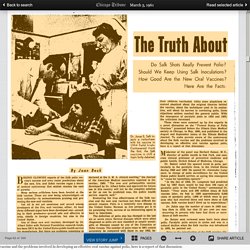 Jonas E. Salk injects a volunteer with his vaccine in 1954 field trials. March 5, 1961 - The Truth About the Polio Vaccines. The Oral Polio Vaccine Can Go 'Feral,' But WHO Vows to Tame It : Goats and Soda. April 1959: Bottles containing the polio vaccine. 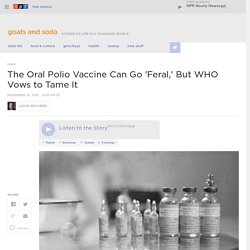 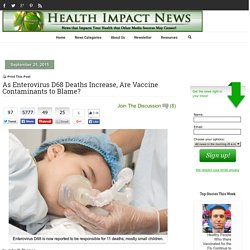 Thomas Health Impact News In 2014 two killer viruses have been reported in the U.S. news. One has been linked to 11 deaths, and the other to a single death. Polio: Vaccinated British man shed virus for 30 years. A British man who was vaccinated against polio has been producing the virus for nearly 30 years. 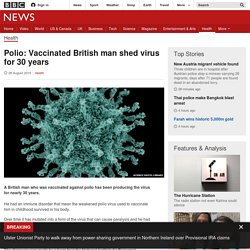 He had an immune disorder that mean the weakened polio virus used to vaccinate him in childhood survived in his body. Over time it has mutated into a form of the virus that can cause paralysis and he had no idea the jab had not worked. DDT and the Rise and Fall of Polio. In the 1940s and 1950s, DDT was believed to be completely safe for humans. 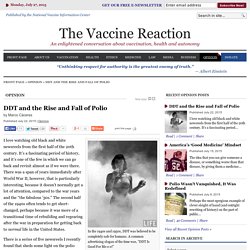 A common advertising slogan of the time was, “DDT Is Good For Me-e-e!” I love watching old black and white newsreels from the first half of the 20th century. It’s a fascinating period of history, and it’s one of the few in which we can go back and revisit almost as if we were there. There was a span of years immediately after World War II, however, that is particularly interesting, because it doesn’t normally get a lot of attention, compared to the war years and the “the fabulous ’50s.” Polio and DDT. Polio and DDT[back] Polio [back] Pesticides [The DDT connection to polio was resurrected by Jim West (where he matches polio incidence with pesticide usage) as was the work of Ralph R. Scobey, M.D. and Morton S. Biskind, M.D.

A few people have used his research without giving credit.] The test-tube synthesis of a chemical called poliovirus: The simple synthesis of a virus has far-reaching societal implications. Ratner_1960. Govt. says cases reported from UP are of Acute Flaccid Paralysis, not polio. The Ministry of Health & Family Welfare (MoHFW) today clarified that the cases reported in a section of the media from Uttar Pradesh were of Acute Flacid Paralysis (AFP) and not polio and asserted that the country remained polio-free.

A press release from the Ministry said that, every year, approximately 50,000 AFP cases are picked up and investigated from across the country by the polio surveillance network. All AFP cases investigated in 2012, 2013 and 2014 have tested negative for poliovirus. Nearly 18,000 AFP cases have been investigated between January and June 2015 as a part of the ongoing surveillance activities in India. When to Sign Polio's Death Certificate. Polio isn't hard to prevent. Beginning in the late 1980s, campaigns aimed at killing off the disease cut the number of new cases around the world to just a few hundred a year.

But even if there were no new cases this year, a study out today concludes, it could take several more years before epidemiologists could declare polio truly dead. The core reason is surprisingly simple, if not widely known: Poliovirus, the virus that causes the disease polio myelitis, doesn't actually make most people sick. For every person who does get sick—and that can mean something as mild as a sore throat or as severe as paralysis and death—there are 19 infected who don't get sick but do remain contagious, any one of whom could set off the next outbreak. India's Polio-Free Status a Cruel Joke. Photo: The Dalai Lama launching the bivalent oral polio vaccine in India, Jan 2010. Learn More. The definition of polio has been changed repeatedly since the programme was launched, thus automatically leading to a drastic fall in the number of cases Polio, traditionally synonymous with paralysis and disability, has been given a new name in India.

It is now known as NPAFP or non polio acute flaccid paralysis. You better take screenshots of all important vaccine information online! Someone commented on Sharyl Attkisson’s article Government Wipes Recent Vaccine Injury Data from Website that Until a couple of weeks ago, the CDC page on polio stated that up to 95% of all polio cases are so mild as to be asymptomatic. NINETY-FIVE PERCENT. Suddenly, with absolutely no explanation, it now says 72%.Get screen shots of EVERYTHING. Polio outbreak in Nigeria sparked by vaccine - Infectious diseases. LONDON — For doctors struggling to eradicate polio, fighting the paralytic disease can mean vaccinating children in war-torn regions, persuading governments to pay attention, and begging donors for money.

Hidden enemy: Emerging form of poliovirus threatens hopes for eradication. Because the virus is so good at hiding, and because children must receive several vaccine doses to become fully immunized, the WHO’s eradication strategy has called for blanketing polio-affected regions with repeated vaccination campaigns.

The oral polio vaccine has some important advantages for these campaigns, especially in developing countries. Since it’s swallowed, it gives better intestinal immunity than the injected vaccine, a boon in areas where people are often exposed to sewage. It’s cheap, and there is no worry about supplying clean needles. Year-old baby tested positive for polio, family disagrees - The Express Tribune. The diseas­e has not paraly­sed baby Yasir, who was tested in Latt Basti villag­e in Bin Qasim Town.

The Jonas Salk Polio Vaccine: A Medical Breakthrough or a Propaganda Campaign for Big Pharma? By Timothy Alexander Guzman. Nicholas Gonzalez, M.D. – Scientifically No Polio Vaccine was Needed. Dr. Crippling disease: Another polio case confirmed in Balochistan. “The child was administered five Oral Polio Vaccine (OPV) doses through Supplementary Immunization Activities (SIA),” an official of Health Department said. STOCK IMAGE QUETTA: Another case of poliovirus was detected in an 18-month-old boy in Chaman, a border town which shares borders with Afgahnistan, in Qila Abdullah district, raising the total number of cases in Balochistan to 17 this year.