At Venice Biennale, artists use VR to drive home climate crisis — Quartzy. Climate change is here but not everyone can feel the impact yet. 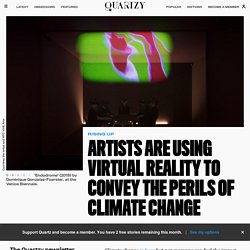 Some artists are turning to virtual reality to help audiences better “experience” it. While climate scientists have warned about the effects of specific increases in the average global temperature, translating such numbers into something that people feel more viscerally has been a challenge, notes Nadine Kuhla von Bergmann, managing director of Creative Climate Cities, a Berlin-based consultancy that promotes climate change awareness and sustainable urban development. “Mobilizing people to fight the climate crisis is only successful if the impact on their daily lives is well-explained and illustrated,” she says.

“Art triggers emotions which numbers usually don’t… and VR art is powerful.” Empathy Finds A New Life In VR At Sundance. "Traveling while Black" In what proved to be one of the most popular VR experiences at the New Frontier, Academy Award-winner Roger Ross Williams and Ayesha Nadarajah co-directed a 20-minute, 360-degree virtual reality recreation of the restaurant, Ben’s Chili Bowl in "Traveling While Black. 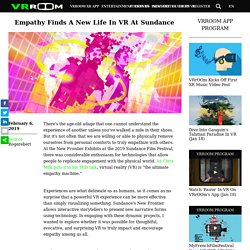 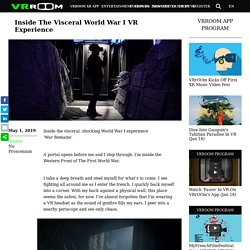 I knew ostensibly what this experience was “about.” And, yet, actually going through War Remains is a whole other thing: it’s shocking, overwhelming, intense, and heart-poundingly visceral. Jellyfish Or Plastic Bag? VR Film Lets You Ponder. Moon jellyfish off the coast of Gam, Raja Ampat, Indonesia. 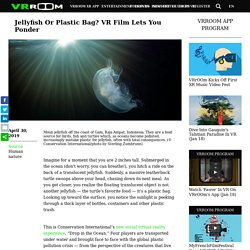 They are a food source for birds, fish and turtles which, as oceans become polluted, increasingly mistake plastic for jellyfish, often with fatal consequences. (© Conservation International/photo by Sterling Zumbrunn) Imagine for a moment that you are 2 inches tall. Submerged in the ocean (don’t worry, you can breathe!) , you hitch a ride on the back of a translucent jellyfish.

Suddenly, a massive leatherback turtle swoops above your head, chasing down its next meal. The role of virtual reality and technology in the future of museums. Museums are usually considered purveyors of the past, but in Alex Benay's eyes, they might be better off as tech pioneers. 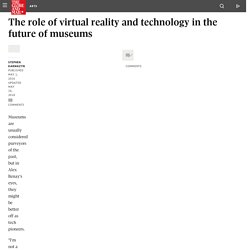 "I'm not a traditionalist," said Benay, president and CEO of the Canada Science and Technology Museums Corporation. "The concept here is using things like virtual reality, open data, anything that gets the story out … whether it's raw or filtered, [it] means engagement. " The first test of Benay's approach is a virtual-reality (VR) simulation of the 1936 CN 6400 steam locomotive. Acquired by the Canada Science and Technology Museum in 1967, the train is a popular attraction at the museum. Story continues below advertisement Visitors to the museum, currently closed for renovations, will step into a six-foot-long by six-foot-high box, throw on an Oculus Rift headset and begin "operating" the train in 4-D, complete with surround sound, air cannons shooting steam into their face while the floor quakes beneath their feet. 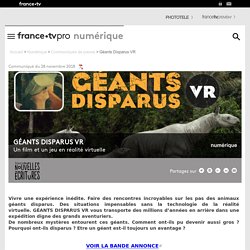 The Case for Location-Based Virtual Reality. The Importance Of Interaction For Presence in VR. Natural interaction is key in virtual reality. 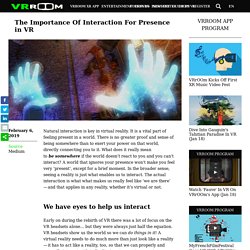 It is a vital part of feeling present in a world. There is no greater proof and sense of being somewhere than to exert your power on that world, directly connecting you to it. What does it really mean to be somewhere if the world doesn’t react to you and you can’t interact? How Dreamscape Reinvented 'The Blu' For LBVR. “The Blu: Deep Rescue” is the first location-based VR experience produced by Wevr, and Rowell explained that the company saw this as a chance to expand on the idea of the franchise. 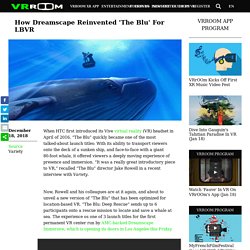 “We saw it as a huge opportunity to advance The Blu,” he said. The original title was very much made for VR first-timers looking for a breathtaking experience. “The home product didn’t really have a specific narrative,” said Rowell. Five Ways VR Is Making The World A Better Place. Working with local authorities across the UK, the program offers a VR Library which includes 12 episodes of high impact immersive content designed for use within adoption, fostering, and wider children’s services.CORNERSTONE VR Virtual reality can change what a person sees, how they think, what they feel and even how they behave. 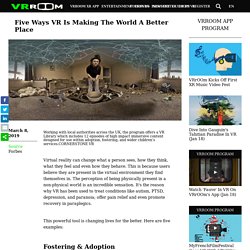 This is because users believe they are present in the virtual environment they find themselves in. The perception of being physically present in a non-physical world is an incredible sensation. It's the reason why VR has been used to treat conditions like autism, PTSD, depression, and paranoia; offer pain relief and even promote recovery in paraplegics. This powerful tool is changing lives for the better. DOSSIER / Tour du monde des expositions et visites en réalité virtuelle (17/07/17) – Club Innovation. European Museums Get Adventurous With Virtual Reality. While this museum has gone all in, others have been experimenting with VR before committing portions of their budgets. 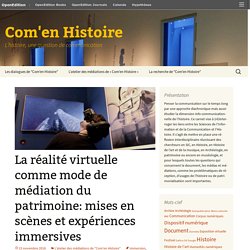 The museum and this exhibition are both free to enter. Combining the expertise of MAST and the design department at PUC-Rio, this new show will feature exhibits developed during an interdisciplinary study carried out by students from the ‘Design em Mídia Digital’ (Design in Digital Media) course at the university. VR gets arty at Tribeca Film Festival 2019. Tribeca Immersive 2019: VR and beyond. VR Headsets Only See 6 Hours of Usage a Month on Average. Is The Virtual Reality Dream Dying? We were promised better worlds, and all we got was this lousy headset. Hilmar Veigar Pétursson, CEO of the studio CCP Games (responsible for the massive Eve: Online), says the company doesn't see much of a future for virtual reality gaming.

“We expected VR to be two to three times as big as it was, period,” Pétursson told gaming site Destructoid just a few days ago, adding, “You can't build a business on that.” There's a chance the company could jump back in, but their own data showed adoption was slow, even among enthusiasts. “The important thing is we need to see the metrics for active users of VR. Tribeca Immersive 2019: A VR Arcade In Review. Location-Based VR: The Next Phase Of Immersive Entertainment. Neurogaming's Polygon VR experience. Anshel Sag Whenever there’s a new platform, the technology industry falls over itself looking for the ‘killer app.’ With the rapid innovation and investment in the VR industry, there are a lot of people looking for their opportunity to enter the market before it hits the mainstream. How The Ancient World Is Being Recreated In VR. A digital simulation created in 2007 using the Unreal Engine 2 of a housing group from the ancient Maya city of Chunchucmil Archaeological field work typically involves lots of dirt, sun, and at least an insect or two, but archaeologist David R.

Futurist Friday: Virtual Reality & the Museum of the Future – American Alliance of Museums. The immersive virtual museum experience (at least the visual dimension) is creeping closer and closer. Your Futurist Friday assignment: this 2 min video by Europeana, using Oculus’ head-mounted display to tour a 3D model of the fictional “EUseum.” Skip over related stories to continue reading article As Oculus’ PR says:“Imagine being able to visit the Louvre, the Rijksmuseum and the Guggenheim all in one day!

Imagine looking at the world’s most famous masterpieces from your favourite chair in your own home. Philip Rosedale: 'Social VR Is Not Sustainable' Virtual Reality Bombshell: Philip Rosedale Says Social VR Not Sustainable With Slow HMD Sales, Drastically Scales Back High Fidelity Hosted Content, Moves Focus To PC/Mac Clients Last week at High Fidelity's regular community meeting, Philip Rosedale stood before dozens of assembled robots, anime girls, and other assorted avatars, and dropped a couple fairly large bombs that are likely to have an industry-wide impact: The company is closing down nearly all its own hosted domains (users can still host their own), and devoting much more attention to supporting its desktop clients -- both PC and Mac.

(Watch above.) Meet The Bonsai That Survived Hiroshima, In VR. The tree survived, and its story, nuclear blast and all, was stored in its rings. Eventually, the tree was given to the US as a bicentennial gift from Japan in 1976, though its trial of atomic survival didn't surface until 2004, when Yamaki family members visited and mentioned its history.

. * Virtual reality and the museum of the future. Imagine being able to visit the Louvre, the Rijksmuseum and the Guggenheim all in one day! Imagine looking at the world’s most famous masterpieces from your favourite chair in your own home. Une-breve-histoire-de-la-realité-virtuelle. Is VR The Future Of Social Networking? The VR industry is experiencing unprecedented growth, reaching over $27 billion in 2018. Market analysts predict the worldwide VR market is set to reach over US$200 billion by 2022. Museopunks Episode 29: Virtually Yours (Part 2) – American Alliance of Museums. VR Changes How We See Our Molecular World. UK’s first permanent Virtual Reality space in an arts institution to open in London. How Museums are using Virtual Reality. La réalité virtuelle au service de la culture et du patrimoine.

VR Exhibition Speculative Cultures Opens In NYC. VR And AR Could Be Profitable Tools For Museums. The Blu Becomes A Museum Exhibit. Is Virtual Reality the Ultimate Empathy Machine? Headsets Virtually Take You To Antarctica.