FORESTS 17/03/21 The Effects of Forest Litter and Waterlogging on the Ecotoxicity of Soils Strongly Enriched in Arsenic in a Historical Mining Site. This study examined the effects of waterlogging and forest litter introduced to soil on chemical properties of soil pore water and ecotoxicity of soils highly enriched in As. 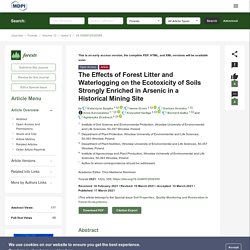 These effects were examined in a 21-day incubation experiment. Tested soil samples were collected from Złoty Stok, a historical centre of arsenic and gold mining: from a forested part of the Orchid Dump (19,600 mg/kg As) and from a less contaminated site situated in a neighboring forest (2020 mg/kg As). An unpolluted soil was used as control. The concentrations of As, Fe and Mn in soil pore water were measured together with a redox potential Eh. A battery of ecotoxicological tests, including a bioassay with luminescence bacteria Vibrio fischeri (Microtox) and several tests on crustaceans (Rapidtox, Thamnotox and Ostracodtox tests), was used to assess soil ecotoxicity. MethodsX Volume 8, 2021, Determination of four arsenic species in environmental water samples by liquid chromatography- inductively coupled plasma - tandem mass spectrometry.

Motivation and background methods Arsenic species have been measured using a variety of techniques that have been reviewed extensively [1], [2], [3], [4] with many recent methods focusing on chromatographic separation of As species and detection/quantitation of As by inductively coupled plasma-mass spectrometry (ICP-MS) [1,3,5]. 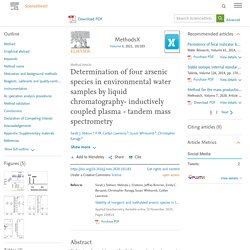 When measuring As(III), As(V), DMA, and MMA, anion exchange separation is sufficient for retention and separation because all four species are anionic. Methods that use anion exchange columns, including the Hamilton PRP-X100 column, are widespread [6], [7], [8], and when paired with a nitrate/phosphate mobile phase are promising for achieving good separation of As(III) and DMA, which can be particularly challenging. Rheinisch-Westfälischen Technischen Hochschule Aachen 05/03/12 Thèse en ligne : Natural arsenic and uranium accumulation and remobilization in different geological environments. 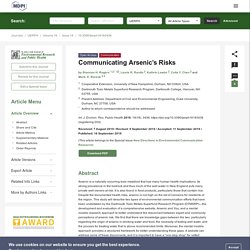 Its strong prevalence in the bedrock and thus much of the well water in New England puts many private well owners at risk. It is also found in food products, particularly those that contain rice. Despite the documented health risks, arsenic is not high on the list of concerns for residents of the region. PLANT AND HUMAN HEALTH 23/01/19 Arsenic and Heavy Metal (Cadmium, Lead, Mercury and Nickel) Contamination in Plant-Based Foods. MINERALS 19/08/19 Investigation of Spectral Variation of Pine Needles as an Indicator of Arsenic Content in Soils. 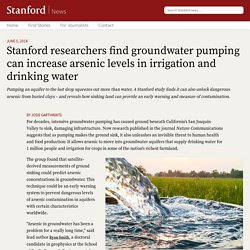 Now research published in the journal Nature Communications suggests that as pumping makes the ground sink, it also unleashes an invisible threat to human health and food production: It allows arsenic to move into groundwater aquifers that supply drinking water for 1 million people and irrigation for crops in some of the nation’s richest farmland. 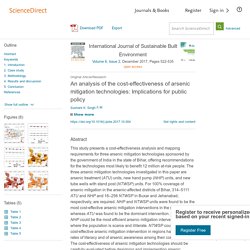 Arsenic is a naturally occurring metalloid and a group A human carcinogen, widely distributed in Earth's crust (USEPA, 1999, Ravenscroft et al., 2009). Among the arsenic-contaminated countries, half have only recently identified the problem (Ravenscroft et al., 2009, Bundschuh et al., 2010, IWA., 2016). These countries adhere to various standards of arsenic in drinking water, ranging from 5 µg/L in the United States to 50 µg/L in most developing countries (Ahmed, 2003, Ravenscroft et al., 2009, Singh and Stern, 2017). Environments 2018, 5(7), 83 Pronounced Antagonism of Zinc and Arsenate on Toxicity to Barley Root Elongation in Soil. The averaged net root elongation (NRE) responses of all of the treatments are shown in Table S4. 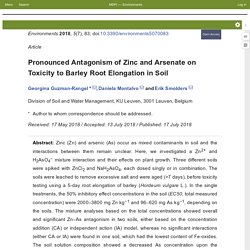 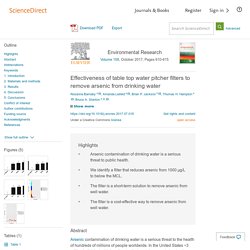 Introduction Arsenic contamination of drinking water is a serious threat to the health of hundreds of millions of people worldwide (Carlin et al., 2016, Flanagan et al., 2015a, Smith et al., 2016, Zheng and Ayotte, 2015). In the United States (U.S.), for example, forty-three million people use private wells and the United States Geological Survey estimates that ~3 million people in the U.S. drink private well water that contains arsenic levels above the World Health Organization (WHO) standard and U.S. FRONT. MICROBIOL. 14/08/18 Environmental Concentrations of Copper, Alone or in Mixture With Arsenic, Can Impact River Sediment Microbial Community Structure and Functions. Introduction Sediments are an essential component of aquatic ecosystems, as they provide a habitat for many species and thus host a non-negligible biological diversity (Battin et al., 2001). 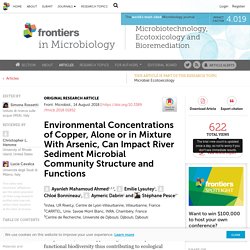 Within sediments, benthic heterotrophic microbial communities support various ecosystem functions, from organic matter recycling (Schwarz et al., 2007) to pollutant degradation and transformation (Bedard, 2008) and biomass production (Haglund et al., 2003). They are essential for the proper functioning of biogeochemical cycles as well as for ecosystem stability and resilience (Martiny et al., 2013). Sediments are also natural receptors for hydrophobic and persistent pollutants (such as trace metals, polycyclic aromatic hydrocarbons or polychlorinated biphenyls) that can accumulate over time (Bombardier, 2007). 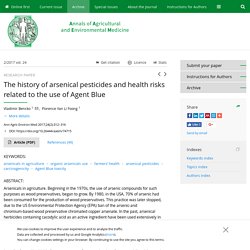 Beginning in the 1970s, the use of arsenic compounds for such purposes as wood preservatives, began to grow. By 1980, in the USA, 70% of arsenic had been consumed for the production of wood preservatives. Vladimir Bencko Institute of Hygiene and Epidemiology, First Faculty of Medicine, Charles University, Prague, Czech Republic. PARLEMENT EUROPEEN - Réponse à question E-000644-18 Concentrated zinc and arsenic discharges. An investigation by the University of Huelva published in the Marine Pollution Bulletin, identifies the phosphogypsum ponds in the vicinity of that city as being responsible for the leakage of large concentrations of zinc and arsenic. 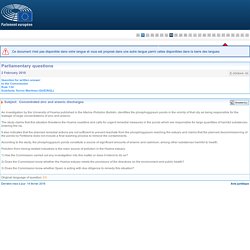 The study claims that this situation threatens the Huelva coastline and calls for urgent remedial measures in the ponds which are responsible for large quantities of harmful substances entering the ría. It also indicates that the planned remedial actions are not sufficient to prevent leachate from the phosphogypsum reaching the estuary and claims that the planned decommissioning of the ponds by Fertiberia does not include a final washing process to remove the contaminants. According to the study, the phosphogypsum ponds constitute a source of significant amounts of arsenic and cadmium, among other substances harmful to health. Pollution from mining-related industries is the main source of pollution in the Huelva estuary. BMC PUBLIC HEALTH 27/10/17 A comparison of arsenic exposure in young children and home water arsenic in two rural West Texas communities. This study followed on a formal Health Impact Assessment showing elevated As levels in source well-water supplies of a rural village in the U.S.

Southwest [35], and aimed to determine whether children in the well-water supplied village (“Community 1”) had elevated blood As levels as compared to children living in a geographically nearby and demographically similar town using a municipal water supply (“Community 2”). The study used ICP-MS for all blood and water sample analysis, a reliable and valid method for accurate detection of low level heavy metals. ICP-MS analysis of blood for determining child As exposure has some advantages over the detection of As in urine.

The material supports laboratories in implementing Commission Recommendation 2015/1381 on the monitoring of arsenic in food. Arsenic is a metalloid which is released in the environment from natural and anthropogenic sources. The toxicity of the element strongly depends on its form: inorganic arsenic is highly toxic (as attested by its popularity in classic crime stories) and the tragic and still ongoing pollution of wells and subsequently food in Bangladesh has received ample coverage in the media. Organoarsenic compounds, however, are less toxic. One of them, arsenobetaine (AB) is the major form of arsenic in marine fish and most other seafood. Int J Environ Res Public Health. 2015 May; 12(5): 4587–4601. A Concurrent Exposure to Arsenic and Fluoride from Drinking Water in Chihuahua, Mexico.

J Diabetes Metab Disord. 2014; 13: 117. Growing burden of diabetes in Pakistan and the possible role of arsenic and pesticides. Int. J. Environ. Res. Public Health 2015, 12 , Estimation of Arsenic Intake from Drinking Water and Food (Raw and Cooked) in a Rural Village of Northern Chile. Urine as a Biomarker of Recent Exposure. VKM_NO 03/05/16 Dietary exposure to inorganic arsenic in the Norwegian population. Norwegian adults do not have specific eating patterns leading to a different dietary exposure to inorganic arsenic than other European adult population.

VKM was asked to comment on the following: Dietary total arsenic exposure in Norway The dietary exposure to total arsenic for the Norwegian population, was estimated by EFSA in 2009. FOOD_DTU_DK 12/04/16 Facts about inorganic arsenic in food. Inorganic arsenic is carcinogenic according to the World Health Organization, WHO. Rice and rice products are a significant source of inorganic arsenic in Denmark and the intake is so high that the National Food Institute, Technical University of Denmark, assesses that the intake should be lowered.

Desalination 280 (2011) 72–79 Arsenic removal from real arsenic-bearing groundwater by adsorption on iron-oxide-coated natural r. Annals of the Sri Lanka Department of Agriculture 2011.13: 229-243. ARSENIC IN THE ENVIRONMENT – AN OVERVIEW ON GLOBAL AND SRI L.

Annals of the Sri Lanka Department of Agriculture 2011.13: 229-243. ARSENIC IN THE ENVIRONMENT – AN OVERVIEW ON GLOBAL AND SRI LANKAN CONTEXT – guatemalt

IJERPH, Vol. 10, 2013 Pages 3453-3464: Arsenic Resistance and Prevalence of Arsenic Resistance Genes in Campylobacter jejuni and. IJERPH, Vol. 10, 2013: Case-Control Study of Arsenic in Drinking Water and Lung Cancer in California and Nevada. Abstract: Millions of people are exposed to arsenic in drinking water, which at high concentrations is known to cause lung cancer in humans. At lower concentrations, the risks are unknown. We enrolled 196 lung cancer cases and 359 controls matched on age and gender from western Nevada and Kings County, California in 2002–2005. After adjusting for age, sex, education, smoking and occupational exposures, odds ratios for arsenic concentrations ≥85 µg/L (median = 110 µg/L, mean = 173 µg/L, maximum = 1,460 µg/L) more than 40 years before enrollment were 1.39 (95% CI = 0.55–3.53) in all subjects and 1.61 (95% CI = 0.59–4.38) in smokers. Although odds ratios were greater than 1.0, these increases may have been due to chance given the small number of subjects exposed more than 40 years before enrollment.