Huge DNA Databases Reveal the Recent Evolution of Humans. “That was the thing I was most interested in,” says Gil McVean, a statistical geneticist at Oxford, who was not involved in the research. 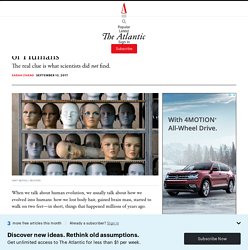 “Why are there so few mutations that have a big effect on longevity?” The most obvious effects from APOE and CHRNA3 emerge late in life, after most people have already had children. In that case, you would expect there to be no selection pressure on mutations affecting longevity. מי זאת לוסי האוסטרלופיתקוס? - אנציקלופדיית אאוריקה. Sciam.co. Much of the modern world is explained by one population spike. It has long been true that small and medium-sized businesses (SMBs) comprise the backbone of the American economy. 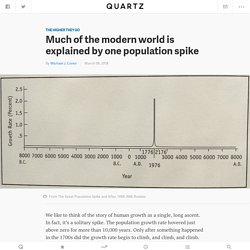 They make up 99.7% of American companies, and employ 49% of all private-sector American workers. They are the key driver of economic growth. And growth is important for everyone—we live in an economic system that is built upon it. But it’s getting harder for SMBs to compete in an ever-evolving and fraught environment. They must sell something of value, provide a great sales experience, offer exemplary after-sales service, recognize loyalty, and then do it all over again. The good news is that providing a consummate customer experience is easier than you might think. 1. At some point you must decide who and what your company is. 2. You need to be micro-moment ready. 3. 50 years ago, invasive species traveled the Suez Canal. Hunting regulations are forcing animals to change in all sorts of ways. Humans are perhaps the greatest source of evolutionary pressure. 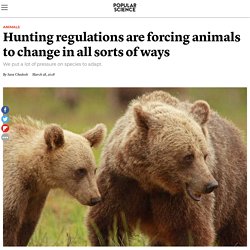 Not greatest as in best—we just apply a lot of force. In just a few thousand years we drastically changed the temperament of dogs by domesticating them, and in a couple hundred managed to diversify them into separate breeds. We’ve done the same to virtually every livestock animal. Yes, we are truly excellent at forcing other species to suit our needs and whims. But perhaps our greatest work—and again, that’s not meant as a compliment—is how we’ve changed wild animals through hunting.

A new bird species has evolved on Galapagos and scientists watched it happen. For the first time, scientists have been able to observe something amazing: the evolution of a completely new species, in the wild, in real-time. 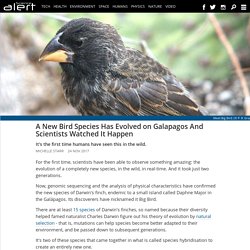 And it took just two generations. Now, genomic sequencing and the analysis of physical characteristics have confirmed the new species of Darwin's finch, endemic to a small island called Daphne Major in the Galápagos. Its discoverers have nicknamed it Big Bird. There are at least 15 species of Darwin's finches, so named because their diversity helped famed naturalist Charles Darwin figure out his theory of evolution by natural selection - that is, mutations can help species become better adapted to their environment, and be passed down to subsequent generations.

A new bird species has evolved on Galapagos and scientists watched it happen. Questioning Evolution: The Push to Change Science Class. How a DNA revolution has decoded the origins of our humanity. Scientists made a remarkable discovery at Trou Al’Wesse in Belgium earlier this year. 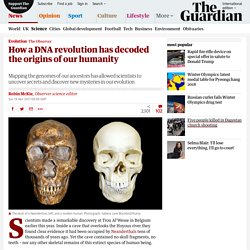 Inside a cave that overlooks the Hoyoux river they found clear evidence it had been occupied by Neanderthals tens of thousands of years ago. Yet the cave contained no skull fragments, no teeth – nor any other skeletal remains of this extinct species of human being. The team, from the Max Planck Institute for Evolutionary Anthropology in Leipzig, were sure of their ground, however. Their genetic analysis of soil samples, scraped from the cave floor, had pinpointed the presence of Neanderthals through that most definitive of biological markers: their DNA. In other words, without digging up a bone or a molar, the team, led by geneticist Matthias Meyer, had found – merely by studying a few microscopic strands of DNA – that tens of thousands of years ago Neanderthals had sheltered at Trou Al’Wesse. 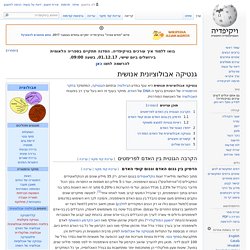 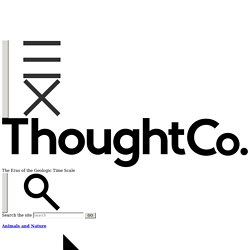 After the Permian Extinction caused so many species to go extinct, many new species evolved and thrived. The Mesozoic Era is also known as the "age of the dinosaurs" because dinosaurs were the dominant species for much of the era. Dinosaurs started off small and got larger as the Mesozoic Era went on. The climate during the Mesozoic Era was very humid and tropical and many lush, green plants were found all over the Earth. Top 5 misconceptions about evolution and why they're wrong. Most science lovers are used to defending the evidence when the subject of evolution comes up. 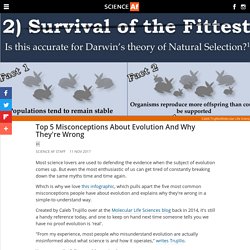 But even the most enthusiastic of us can get tired of constantly breaking down the same myths time and time again. Which is why we love this infographic, which pulls apart the five most common misconceptions people have about evolution and explains why they're wrong in a simple-to-understand way. Created by Caleb Trujillo over at the Molecular Life Sciences blog back in 2014, it's still a handy reference today, and one to keep on hand next time someone tells you we have no proof evolution is 'real'. למה היה כל כך קריטי להציל את הביצה הזו? 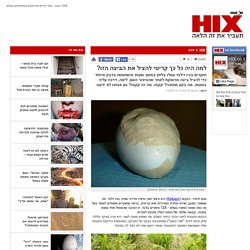 The Descent of Man Summary. The firestorm of controversy that followed the publication of On the Origin of Species by Means of Natural Selection (1859) had died down considerably by the time Darwin decided to publish his book about the origin of the human species. 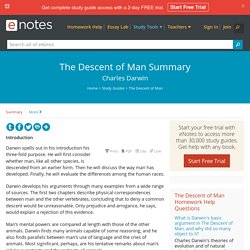 Consistent with his meticulously detailed analysis of the origin of species within the animal kingdom, Darwin explains in The Descent of Man how the human animal, too, evolved from lower forms. Darwin Correspondence Project. All of Darwin's Books. All 25 Books of Charles Darwin: 1839 late May The three volume narrative of the Beagle voyage "Journal of Researches into the Natural History and Geology of the Countries Visited During the Voyage of H.M.S. Beagle" was published. This was the "three author" edition by Capt. Philip King, Capt. Robert FitzRoy, and Charles Darwin.

On the Origin of Species. A work of scientific literature by Charles Darwin which is considered to be the foundation of evolutionary biology Various evolutionary ideas had already been proposed to explain new findings in biology. There was growing support for such ideas among dissident anatomists and the general public, but during the first half of the 19th century the English scientific establishment was closely tied to the Church of England, while science was part of natural theology. Ideas about the transmutation of species were controversial as they conflicted with the beliefs that species were unchanging parts of a designed hierarchy and that humans were unique, unrelated to other animals.

The political and theological implications were intensely debated, but transmutation was not accepted by the scientific mainstream. Summary of Darwin's theory[edit] Darwin pictured shortly before publication Background[edit] Developments before Darwin's theory[edit] %D7%90%D7%95%D7%93%D7%99%D7%A1%D7%90%D7%94%20%D7%92%D7%9C%D7%99%D7%95%D7%9F%202. מורשתו החיה של דארווין. Watchmaker analogy. The watchmaker analogy or watchmaker argument is a teleological argument, which by way of an analogy, states that design of creation (like a watch) implies a designer. The analogy has played a prominent role in natural theology and Deism, which accepted a Creator but rejected Biblical inerrancy and the supernatural interpretation of events such as miracles.

But I had gradually come by this time, i.e., 1836 to 1839, to see that the Old Testament from its manifestly false history of the world, with the Tower of Babel, the rainbow at sign, &c., &c., and from its attributing to God the feelings of a revengeful tyrant, was no more to be trusted than the sacred books of the Hindoos, or the beliefs of any barbarian. But I was very unwilling to give up my belief... Thus disbelief crept over me at a very slow rate, but was at last complete. The rate was so slow that I felt no distress, and have never since doubted even for a single second that my conclusion was correct. Human origins. Is Most of Our DNA Garbage? Photo T. Ryan Gregory’s lab at the University of Guelph in Ontario is a sort of genomic menagerie, stocked with creatures, living and dead, waiting to have their DNA laid bare. Scorpions lurk in their terrariums.

Tarantulas doze under bowls. Flash-frozen spiders and crustaceans — collected by Gregory, an evolutionary biologist, and his students on expeditions to the Arctic — lie piled in beige metal tanks of liquid nitrogen. Gregory’s investigations into all these genomes has taught him a big lesson about life: At its most fundamental level, it’s a mess. Scientists Sample the Ocean and Find Tiny Additions to the Tree of Life. Continue reading the main story Slide Show Climate change scientists have known for years that rising temperatures affect sea creatures, from the biggest fish to the microscopic plankton at the base of the ocean food chain. Now, a four-year expedition that sampled microbes from across the world’s oceans is bringing the mechanisms of that change into focus.