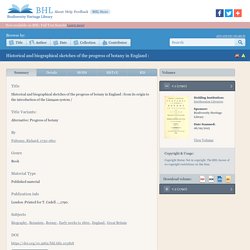 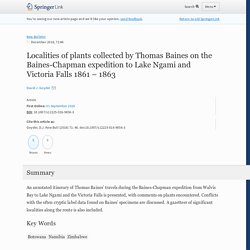 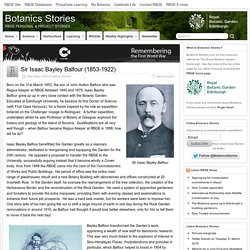 Educated at Edinburgh University, he became its first Doctor of Science (with First Class Honours), for a thesis inspired by his role as expedition botanist on the Challenger voyage to Rodriguez. Edward Kent Balls: Plant Explorer. George Bentham: Archives of Natural History: Vol 30, No 2. John Bradby Blake: British botanist opened China to the west. Matthew Wilson Experimental feature or Give us your feedback Thank you for your feedback. 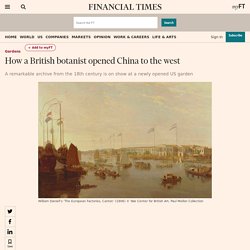 What do you think? Think of a famous plant hunter associated with botanising in China, and names such as Robert Fortune, Ernest Wilson or George Forrest might come to mind. John Bradby Blake Researcher Josepha Richard. Josepha is a historian specialised in 18-19th century China, with a specific interest in the urban history of Guangzhou (Canton) and Sino-Western interactions under the Qing dynasty (1644-1911). 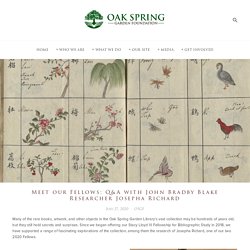 She is currently a postdoctoral fellow in Chinese history at the department of Historical Studies in Bristol University, England. Josepha first began working with the Oak Spring Garden Foundation in 2018 as part of the John Bradby Blake project, an effort from a team of researchers to learn more about the English botanist and trader and his extensive documentation of Chinese flora. National Museum Wales. Ron Boniface was an amateur botanist who undertook a lifelong study of the British flora, travelling extensively throughout England, Wales and Scotland to observe, collect and record vascular plants and bryophytes. 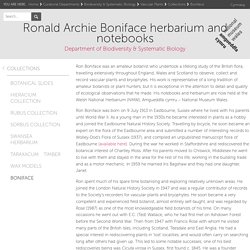 His work is representative of a long tradition of amateur botanists or plant hunters, but it is exceptional in the attention to detail and quality of ecological observations that he made. His notebooks and herbarium are now held at the Welsh National Herbarium (NMW), Amgueddfa cymru – National Museum Wales. Ron Boniface was born on 9 July 1913 in Eastbourne, Sussex where he lived with his parents until World War II. Dr Arthur Broughton: Caribbean herbarium of the 1770s. 300-year-old plant collection brings Bristol Museum & Art Gallery and the Natural History Museum Jamaica together! 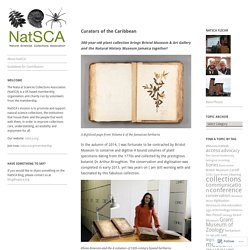 A digitised page from Volume 4 of the Jamaican herbaria In the autumn of 2014, I was fortunate to be contracted by Bristol Museum to conserve and digitise 4 bound volumes of plant specimens dating from the 1770s and collected by the prestigious botanist Dr Arthur Broughton. The conservation and digitisation was completed in early 2015, yet two years on I am still working with and fascinated by this fabulous collection. Disentangling the history of the Robert Brown specimens at RBGE.

Robert Brown (1773-1858) Born in Montrose, Scotland in 1773, Robert Brown made his mark as a scientist in botany and palaeobotany. 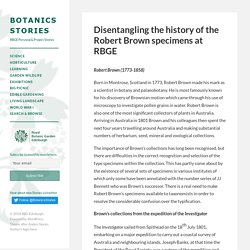 He is most famously known for his discovery of Brownian motion which came through his use of microscopy to investigate pollen grains in water. Robert Brown is also one of the most significant collectors of plants in Australia. On the botany of James Bruce's expedition to the source of the Blue Nile 1768–1773. Two EIC Surgeons- Samuel Browne and Edward Bulkley.

This chapter takes a journey around Madras and connected places, as the settlement rose to prominence in the late seventeenth and early eighteenth century. 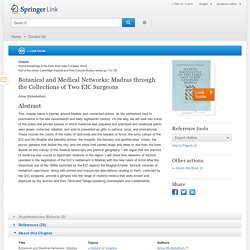 On the way, we will look into some of the public and private spaces in which medicine was prepared and practised and medicinal plants were grown, collected, labelled, and sold or presented as gifts to patrons, local, and international. James Bruce’s Abyssinian plants in Edinburgh. Following some hair-raising adventures, James Bruce of Kinnaird (1730-1794) was the first white Anglo-Saxon Protestant to reach the fountains of the Blue Nile in Ethiopia. 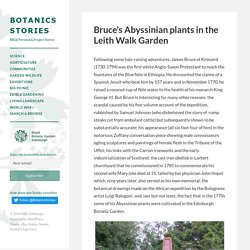 He discounted the claims of a Spanish Jesuit who beat him by 157 years and in November 1770, he raised a coconut cup of Nile water to the health of his monarch King George III. Two artefacts have brought Bruce back to mind in recent days. The first in an exhibition at Bonham’s in Edinburgh of some treasures from Broomhall, the Fife mansion of the Earls of Elgin, by whom Bruce’s collections were inherited. Balugani’s drawings, having survived a period of abandonment in the Nubian desert, have long since crossed the Pond, but a brilliant tartan surcoat and waistcoat that belonged to Bruce formed part of the exhibition. The second reminder is in the form of a drawing of one of Bruce’s houses. Buchanan Hamilton collection - The Linnean Collections. The Linnean Collections Linnean Society Home Buchanan Hamilton collection. Francis Buchanan’s Bengal Survey botanical drawings and specimens reunited after 203 years.

Since September I have been working, on and off, on the fantastic collection of Indian botanical drawings at our sister organisation, Kew. This started out when asked to select some works for an exhibition of Indian paintings to be curated by William Dalrymple at the Wallace Collection in London next September. With the bit firmly between my teeth, I continued to do what I have been doing for the RBGE collection for the last two decades – taking the drawings out of their arrangement in a taxonomic sequence and reassembling them by commissioner and/or artist.

Only after doing this is it possible to undertake serious research on the drawings and to start to restore lost information and context. Heartbroken on St Helena: William John Burchell - One - Imagine you’d left your home in London to establish a new life on the island of St Helena. You begin a trading partnership with your fiancée’s uncle, and the Governor writes to the East India Company’s Directors singing your praises. As a result, you become the island’s schoolmaster, and later the Company’s naturalist. You send out to England for your fiancée to join you and eagerly await her arrival…. only to find that she has transferred her affections to the ship's Captain and no longer intends to marry you. Heartbroken on St Helena: William John Burchell - Two. We left William Burchell, probably the best naturalist you've never heard of, in early 1808 on the island of St Helena, teaching school, tending a nascent botanic garden, and carrying out botanical and geological surveys of the island.

Terrace Knoll : A view in St. Helena. 'In looking inland you have this view and turning towards the sea you have the view of the Friar. Celebrating the tercentenary of John Stuart, 3rd Earl of Bute (1713-1792) Richard Buxton (botanist)

William Curtis worked as an apothecary before discovering that his true passion lay in the garden. As a young man, he devoted himself to the study of plants and insects, publishing his first book, Instructions for collecting and preserving insects; particularly moths and butterflies, at the age of 25. Samuel Dale: lived near Ray and Catesby. Being 'adventurous' has often meant exploring terrain closer to home. Dampier: A voyage to New Holland, etc., in the year 1699. Digital Collections Programme – Blogs from the Natural History Museum.

Horsefield was a Moravian.

#JamesEdwardSmith balked at the idea of describing the “vulva hians” of the Viola in botanical lessons to princesses Elizabeth and Augusta: ‘God knows what it will produce ... on my attendance to the Royal family’! #education #ExploreYourArchives #teachin. Archives of Natural History: Sowerby. Mark Spencer - Forensic Botanist. Richard Spruce and the Trials of Victorian Bryology. Richard Spruce - Botany on a global scale. D'Arcy Wentworth Thompson, the man who shaped biology and art. Threlkeld's Family: ref 2017. Wallace Online. A. R. Wallace Correspondence Project Reaches Important Milestone.