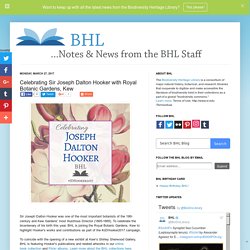 To celebrate the bicentenary of his birth this year, BHL is joining the Royal Botanic Gardens, Kew to highlight Hooker's works and contributions as part of the #JDHooker2017 campaign. To coincide with the opening of a new exhibit at Kew's Shirley Sherwood Gallery, BHL is featuring Hooker's publications and related artworks in our online book collection and Flickr albums. Learn more about the BHL collections here. Learn more about Kew's exhibit, which opened on 25 March, in the post below. Then, be sure to follow #JDHooker2017 on social media as we celebrate Hooker's life and works. We hope you'll also join us again the week of 26-30 June 2017 as we continue our celebrations as part of a larger campaign in conjunction with The Making of Modern Botany conference at Kew Gardens, hosted on 30 June 2017. 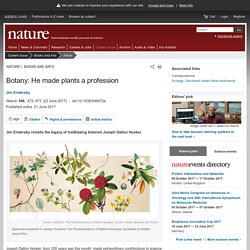 The Rhododendrons of Sikkim-Himalaya. London; Reeve, Benham and Reeve. Specimens featured in Joseph Hooker's The Rhododendrons of Sikkim-Himalaya, illustrated by Walter Hood Fitch. Joseph Dalton Hooker, born 200 years ago this month, made extraordinary contributions to science over a life (1817–1911) that spanned the Victorian era and beyond. Royal Society president and director of the Royal Botanic Gardens, Kew, he was knighted in 1877 for scientific services to the British Empire. Hooker presided over his own empire, too — a global network of botanic gardens, from Sydney to Calcutta and Trinidad, which were used to investigate economically vital plants such as rubber and to arrange where they could be cultivated profitably.

A respectable trade Hooker was one of the first to pursue a paid (and successful) scientific life and make doing so respectable, which paved the way for the careers of modern scientists. A newly discovered J.D. Hooker letter about Draba aizoides – Botanics Stories. The most glowing review of Cleghorn’s (frankly rather dull – his father uncharitably told him that it would ‘drive all other soporifics out of fashion’) 1861 Forests & Gardens of South India was penned by Joseph Hooker. 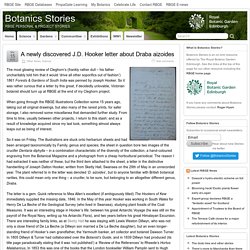 So it was rather curious that a letter by this great, if decidedly unlovable, Victorian botanist should turn up at RBGE at the end of my Cleghorn project. When going through the RBGE Illustrations Collection some 15 years ago, taking out all original drawings, but also many of the rarest prints, for safer storage, I also removed some miscellanea that demanded further study. From time to time, usually between other projects, I return to this stash: and as a result of knowledge acquired since my last look, something almost always leaps out as being of interest. So it was on Friday. The letter is a gem. Joseph Dalton Hooker The letter refers to the purchase of botanical books from Graham’s widow, and it is this that gives a clue to its anonymous recipient. My dear Sir.

On 24 June 1849 Joseph Hooker wrote to his friend Charles Darwin from a camp high in the Sikkim Himalaya. Why was Hooker in India? Read the Essay Peter Donaldson and Jupe productions have kindly shared some exclusive clips from their fascinating documentary film project about Joseph Hooker. Read the full article from Kew Magazine.