New Gift-Wrapped UFO Revelations From The Pentagon: What’s Going On? By Jon Rappoport You’re walking through a sea of misinformation, disinformation, lies, speculation, goofball theories—and suddenly, the wise men behind the curtain decide to reach out and hand you unvarnished facts that blow your mind. 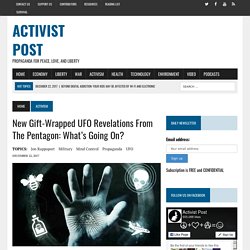 What’s going on? We have an entirely new gambit in the UFO disclosure game. From loudwire.com (Dec.21): “[Musician Tom] DeLonge is currently working with former Pentagon official Luis Elizondo at To The Stars Academy of Arts & Science, which was founded by the ex-Blink guitarist.” This is a new UFO research and merchandising outfit. DeLonge has taken it upon himself to expose the truth about UFOs. According to the NY Times and The Independent, the program had, and still has, metal pieces from a UFO(s), has been studying the pieces, and doesn’t knew what they’re made of. The Independent: “Commander David Fravor and Lieutenant Commander Jim Slaight were on a routine training mission 100 miles out into the Pacific when they were asked to investigate the object.”

13 Reasons to Believe Aliens Are Real. In the good old days, the arrival of UFOs on the front page of America’s paper of record might have seemed like a loose-thread tear right through the fabric of reality — the closest that secular, space-race America could have gotten to a Second Coming. 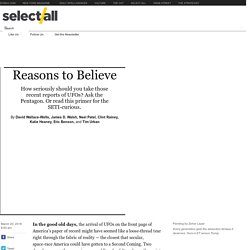 Two decades ago, or three, or six, we would’ve also felt we knew the script in advance, thanks to the endless variations pop culture had played for us already: civilizational conflicts to mirror the real-world ones Americans had been imagining in terror since the beginning of the Cold War. But when, in December, the New York Times published an undisputed account of what might once have sounded like crackpot conspiracy theory — that the Pentagon had spent five years investigating “unexplained aerial phenomena” — the response among the paper’s mostly liberal readers, exhausted and beaten down by “recent events,” was markedly different from the one in those movies. Searching the Universe for Extraterrestrial Life: A Timeline HR: Yeah. President Richard Nixon’s Secret UFO Communications - Linda Howe Earthfiles - Midnight in the Desert.

Did President Richard Nixon hand write a letter to the American people about “an advanced being from outer space” working with our government? 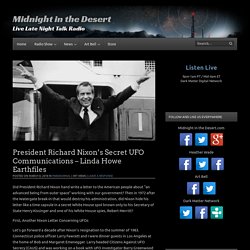 Then in 1972 after the Watergate break-in that would destroy his administration, did Nixon hide his letter like a time capsule in a secret White House spot known only to his Secretary of State Henry Kissinger and one of his White House spies, Robert Merritt? First, Another Nixon Letter Concerning UFOs Let’s go forward a decade after Nixon’s resignation to the summer of 1983. Connecticut police officer Larry Fawcett and I were dinner guests in Los Angeles at the home of Bob and Margaret Emenegger. Larry headed Citizens Against UFO Secrecy (CAUS) and was working on a book with UFO investigator Barry Greenwood that would come out in 1984 entitled, Clear Intent: The Government Coverup of the UFO Experience. Bob Emenegger was the writer with producer Alan Sandler of a 1974 book and TV documentary entitled, UFOs: Past, Present and Future. 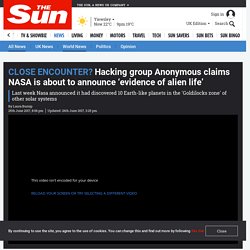 The hackers published YouTube clip which claims a Nasa scientist made the announcement at the last meeting of the US Science, Space and Technology committee. Getty Images It comes after Nasa’s Kepler space observatory discovered 219 “potential new worlds” in other solar systems. Ten of the planets are “rocky” like the Earth and fall in their systems’ “Goldilocks zone” – so-called because it is not too hot or too cold for life to exist. 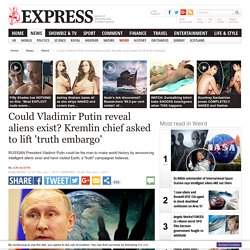 Mr Bassett, who is the only registered lobbyist in the US on the subject of alien disclosure, believes a conspiracy theory that the truth of aliens has been withheld due to the fear of the impact on religion and the rule of law if we all knew. He believes the conspiracy has been in place since at least 1947 when a flying saucer allegedly crash landed at Roswell, New Mexico.

Mr Bassett was interviewed for a Russian documentary during his visit. "PRG believes this may be the first time anyone has made this argument on Russian media inside or outside Russia. " He also met former Soviet and Russian military and agency officials, who are now involved in the disclosure movement.