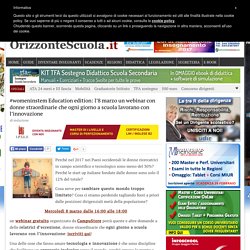 Gender equality in science: it takes a village. The scarcity of women in the ranks of working scientists has been in the news for a discouragingly long time. 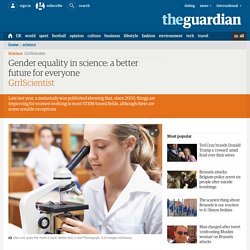 But research studies designed to explain the reasons for this gender disparity are filled contradictions, mainly because they were conducted at different times and on different science, technology, engineering and mathematics (STEM) fields. Gender inequality in science varies among disciplines. By Lilian Nassi-Calò An uneven distribution in gender can be observed amongst academics in the fields of hard science, technology, engineering and mathematics, with men clearly predominating (Science, Technology, Engineering and Mathematics, STEM). 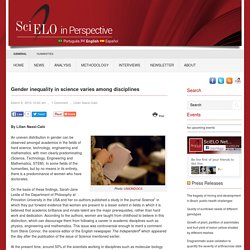 In some fields of the humanities, but by no means in its entirety, there is a predominance of women who have doctorates. On the basis of these findings, Sarah-Jane Leslie of the Department of Philosophy at Princeton University in the USA and her co-authors published a study in the journal Science1 in which they put forward evidence that women are present to a lesser extent in fields in which it is believed that academic brilliance and innate talent are the major prerequisites, rather than hard work and dedication. Gender and Science. Gender Equality in Science Will Require a Culture Shift. Last October news broke of allegations that University of California, Berkeley, astronomer Geoff Marcy had for years harassed female students. 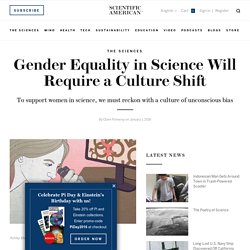 (Marcy, who denied some of the allegations, resigned.) The news reminded me of an experience I had in school. I admired an instructor and was honored when he took me out for a celebratory dinner near the end of the course. After walking me home, he put his arms around me, and alarm bells began to ring. Stemettes raise awareness of International Women’s Day with weekend hackathon. Stemettes held a two-day hackathon to raise awareness of International Women’s Day and encourage girls into science, technology, engineering and maths (Stem) careers. 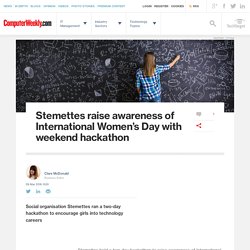 Co-founder of Stemettes Anne-Marie Imafidon said International Women’s Day was used by the network as a platform to raise awareness about women in Stem. It also aimed to encourage awareness and change in the industry, with engagement levels on the day showing that girls are looking for Stem opportunities. What Lies Behind Gender Inequality in Education? Comunicato Stampa dell'11 febbraio 2016. In agenda: via al mese delle STEM, Mobility Conference Exhibition, Smau Padova. Untitled. Il mese delle STEM: iniziative dal MIUR per la Giornata Internazionale della Donna. NoiSiamoPari.it - Home page. Gender equality objectives for the Structural Funds period 2014+ The following objectives are to be pursued when drafting national or regional Operational Programmes, except when socioeconomic analysis shows no need to tackle a certain problem. 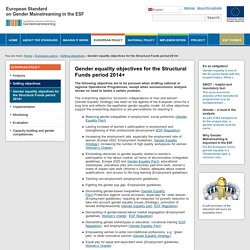 The overarching objective “economic independence of men and women” (Gender Equality Strategy) has been on the agenda of the European Union for a long time and reflects the egalitarian gender equality model. Objective of gender equality policy - Government.se. Inequality watch. Despite numerous improvements in women’s educational and employment outcomes, many OECD countries have not achieved gender equality in economic opportunities and outcomes. 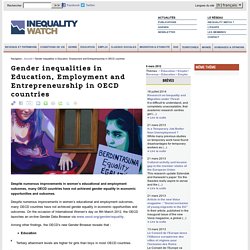 Despite numerous improvements in women’s educational and employment outcomes, many OECD countries have not achieved gender equality in economic opportunities and outcomes. On the occasion of International Women’s day on 8th March 2012, the OECD launches an on-line Gender Data Browser via www.oecd.org/gender/equality. Among other findings, the OECD’s new Gender Browser reveals that : Rapport en. Gender Inequality Index (GII) Gender inequality remains a major barrier to human development. 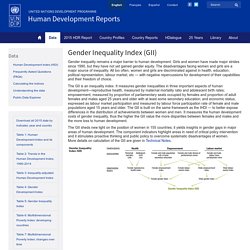 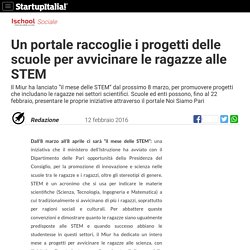 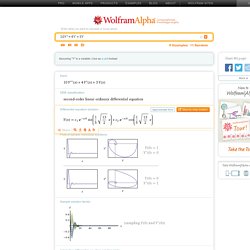 What is STEM? STEM Defined STEM is an acronym for Science, Technology, Engineering and Math education. Teachercomp_en.pdf. EU Skills Panorama - European Commission - Useful Resources. Elgpn. 21st Century Skills Definition. The term 21st century skills refers to a broad set of knowledge, skills, work habits, and character traits that are believed—by educators, school reformers, college professors, employers, and others—to be critically important to success in today’s world, particularly in collegiate programs and contemporary careers and workplaces. Generally speaking, 21st century skills can be applied in all academic subject areas, and in all educational, career, and civic settings throughout a student’s life. It should be noted that the “21st century skills” concept encompasses a wide-ranging and amorphous body of knowledge and skills that is not easy to define and that has not been officially codified or categorized.

While the term is widely used in education, it is not always defined consistently, which can lead to confusion and divergent interpretations. Framework for 21st Century Learning (The Partnership for 21st Century Skills)Four Keys to College and Career Readiness (David T. Reform Debate.