Just The Perception That Your Friends Have More Friends Than You Can Make You Sad. Tim Ellis/Ikon Images/Getty Images When you feel like everyone around you is having more fun and spending more time with friends, it can make you feel bad about yourself — even if it's not true. 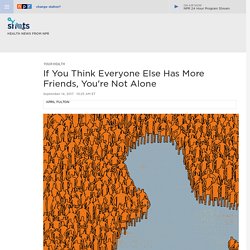 But according to Ashley Whillans, an assistant professor at Harvard Business School who studies how our view of the world affects our view of ourselves, this perception can challenge us to become more social and make more friends. This fear of missing out on parties or events is actually very common. 9 things parents can say to defuse a meltdown with compassion. Action Video Games May Affect The Brain Differently. Mustafahacalaki/Getty Images People who played action video games that involve first-person shooters, such as Call of Duty and Medal of Honor, experienced shrinkage in a brain region called the hippocampus, according to a study published Tuesday in Molecular Psychiatry. 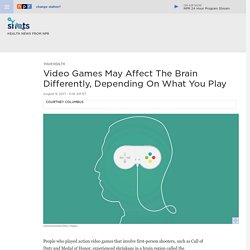 That part of the brain is associated with spatial navigation, stress regulation and memory. Playing Super Mario games, in which the noble plumber strives to rescue a princess, had the opposite effect on the hippocampus, causing growth in it. Scientists have done dozens of studies looking to see if playing video games affects people's health and behavior. 15 Tips on Parenting Introverted Kids. You’re confused by your kid. 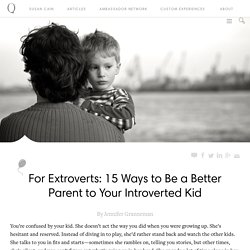 She doesn’t act the way you did when you were growing up. She’s hesitant and reserved. Instead of diving in to play, she’d rather stand back and watch the other kids. A Plan For Raising Brilliant Kids, According to Science : NPR Ed. Since NPR Ed first published this piece last year, it has become one of our most popular posts of all time. 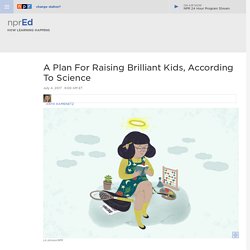 And since then, there has been a little anecdotal proof of concept for these parenting theories: Kathy Pasek, one of the authors interviewed, has a son named Benj Pasek. How to Raise a Feminist Son - The New York Times. Study: The Neurons To Blame When You Turn Into A Food Zombie. Sometimes, I turn into a food zombie. 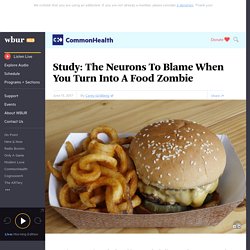 Know the feeling? You don't want to eat, but you're a bit peckish, and something — often a powerful TV image of steaming, gleaming meat or pasta — sends you staggering, arms outstretched, to the fridge or the cupboard, to rummage until you find something to sate the craving. Not Naughty: 10 Ways Kids Appear to Be Acting Bad But Aren't. The Curious Case of Phineas Gage's Brain. Cabinet-card portrait of brain-injury survivor Phineas Gage (1823–1860), shown holding the tamping iron which injured him. 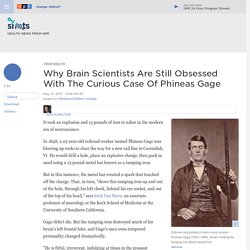 Wikimedia hide caption toggle caption Wikimedia Cabinet-card portrait of brain-injury survivor Phineas Gage (1823–1860), shown holding the tamping iron which injured him. It took an explosion and 13 pounds of iron to usher in the modern era of neuroscience. The two happiest ages of your life. A Baby Born With 3 Parents' DNA Looks Healthy So Far. Mitochondrial diseases can be passed from mothers to their children in DNA. 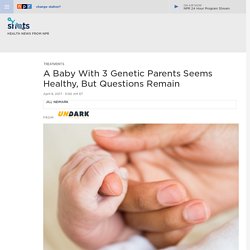 JGI/Tom Grill/Getty Images/Blend Images hide caption toggle caption JGI/Tom Grill/Getty Images/Blend Images Mitochondrial diseases can be passed from mothers to their children in DNA. Last fall, the New York-based reproductive endocrinologist John Zhang made headlines when he reported the birth of the world's first "three-parent" baby — a healthy boy carrying the blended DNA of the birth mother, her husband and an unrelated female donor. The technique, called mitochondrial replacement therapy, allowed the 36-year-old mother to bypass a defect in her own genome that had led, twice before, to children born with Leigh syndrome, a devastating neurological disorder that typically culminates in death before age 3. While heralded in many circles as a breakthrough, the news triggered numerous ethical and scientific questions, many of which remained unanswered at the time.

Depression Hits Teen Girls Especially Hard, And High Social Media Use Doesn't Help. It's tough to be a teenager. 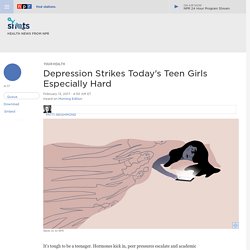 Hormones kick in, peer pressures escalate and academic expectations loom large. Kids become more aware of their environment in the teen years — down the block and online. The whole mix of changes can increase stress, anxiety and the risk of depression among all teens, research has long shown. But a recent study published in the journal Pediatrics suggests many more teenage girls in the U.S. may be experiencing major depressive episodes at this age than boys. And the numbers of teens affected took a particularly big jump after 2011, the scientists note, suggesting that the increasing dependence on social media by this age group may be exacerbating the problem. The Writer Who Couldn't Read : Krulwich Wonders... "In January of 2002," writes the neuroscientist Oliver Sacks, "I received a letter from Howard Engel, a Canadian novelist describing a strange problem. 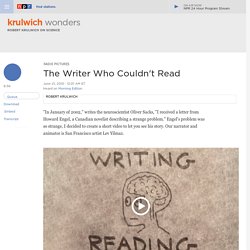 " Engel's problem was so strange, I decided to create a short video to let you see his story. Our narrator and animator is San Francisco artist Lev Yilmaz. On July 31, 2001, Engel woke up, dressed, made breakfast, and then went to the front door to get his newspaper. "I wasn't aware," he says in our NPR interview, "that it was any different from any other morning. " The Brain Scrambles Names Of People You Love.

When Samantha Deffler was young, her mother would often call her by her siblings' names — even the dog's name. 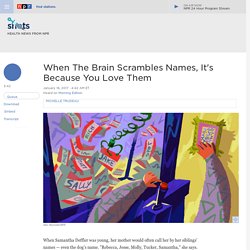 "Rebecca, Jesse, Molly, Tucker, Samantha," she says. A lot of people mix up children's names or friends' names, but Deffler is a cognitive scientist at Rollins College, in Winter Park, Fla., and she wanted to find out why it happens. So she did a survey of 1,700 men and women of different ages, and she found that naming mistakes are very common. Most everyone sometimes mixes up the names of family and friends. Her findings were published in the journal Memory & Cognition. The Brain Scrambles Names Of People You Love. Facial Recognition Keeps Improving Into Early Adulthood.

Stuart Kinlough/Ikon Images/Getty Images hide caption. Magnetic Pulse Jump-Starts Short-Term Recall In Memory Study. Fanatic Studio/Collection Mix: Sub/Getty Images Forget where you just left your car keys? A magnetic pulse might help you remember. Some dormant memories can be revived by delivering a pulse of magnetic energy to the right brain cells, researchers report Thursday in the journal Science. The finding is part of a study that suggests the brain's "working memory" system is far less volatile than scientists once thought. "This changes how we think about the structure of working memory and the processes that support it," says Nathan Rose, a neurocognitive psychologist studying memory at the University of Notre Dame and one of the authors of the research.

Babies on the Brink. How Your Eyes Work. Face Blindness: Oliver Sacks - The Mind's Eye. 6 Potential Brain Benefits Of Bilingual Education : NPR Ed. Part of our ongoing series exploring how the U.S. can educate the nearly 5 million students who are learning English. Brains, brains, brains. One thing we've learned at NPR Ed is that people are fascinated by brain research. And yet it can be hard to point to places where our education system is really making use of the latest neuroscience findings. 15 Tips on Parenting Introverted Kids. Opioid Users Request 'Involuntary Commitment' To Get Treatment. A police officer holds a bag of heroin that was confiscated as evidence in Gloucester, Mass., in March. Massachusetts is one of 38 states that allow civil commitment for substance abuse.

John Moore/Getty Images hide caption. 4 Possible Reasons The Polls Got It So Wrong In The 2016 Presidential Election. Miami voters make their choices at touchscreen voting machines. Cancer Detection: A Shrimp's Eyes Might Help. Suggestible You: How The Mind Acts On Sickness And Health. The terrors of sleep paralysis - Ami Angelowicz. Sleep: Sleep paralysis is caused by an abnormal overlap of the REM (rapid eye movement) and waking stages of sleep. Learn more about the stages of sleep. Sleepy Teens Have More Trouble Learning. Selective Attention and Inattentional Blindness. The vialogue below is based on the topic, Sensation and Perception. Sensation is when you detect a physical energy through stimulation of sense receptors. Mr. Scholl's Site. How To Raise Brilliant Children, According To Science : NPR Ed. "Why are traffic lights red, yellow and green?

" Taking Notes By Hand May Be Better Than Digitally, Researchers Say. What Makes Teenagers Impulsive May Also Help Them Learn. Reports Of Starvation In Syria Call Attention To The Toll Of Extreme Malnutrition : Goats and Soda. What is it like to starve to death? It's an awful question, but it's the question of the moment. For Teenagers, Adult-Sized Opioid Addiction Treatment Doesn't Fit. Opioid Abuse Takes A Toll On Workers And Their Employers. Everyone Uses Singular 'They,' Whether They Realize It Or Not. Anatomy Of Addiction: How Heroin And Opioids Hijack The Brain. How 'Under Pressure' Sounds Without Music: Freddie Mercury And David Bowie A Cappella!

Shawn Achor: The happy secret to better work. Teaching Clinical Psychology - In-Class Exercises. AP Psychology. The 13 Top Online Psychology Games. 695%20Tips%20from%20ToP%20journal. Teaching of Psych Idea Exchange: An OTRP Resource / FrontPage. Babies Learn Accents Before They’re Even Born. A Study Got People to Make Big Decisions With a Coin Toss. The Man Who Woke Up One Morning and Forgot How to Read. Scientists Want to Make Healthy Food Smell Like Junk Food. What Makes a Good Life: Revelatory Learnings from Harvard’s 75-Year Study of Human Happiness. Seldom-seen photos show what America looked like in the 1940s…in color. Science of Us – What Studies Say About Human Behavior & Productivity. Why Do We Love Some Animals But Eat Others? : 13.7: Cosmos And Culture.

The Awkward Yeti » Chapters » Heart and Brain. The Power of One Focused Hour a Day — The Mission. The Neuroscientist Who Discovered He Was a Psychopath. Some States Say Psychopaths Can't Use An Insanity Defense. Taylor Mali - What Teachers Make on Def Jam Poetry. The Science of Happiness - An Experiment in Gratitude.