Pisco in paris. In the Pink: drinking your way round Provence. Drink: are alcohol-free alternatives finally coming of age? What to drink when you’re not drinking? 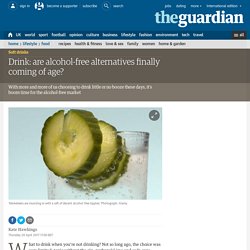 Not so long ago, the choice was very limited: tonic without the gin, perhaps? Lime and soda sans vodka? An oversweet fruity number? Or (yawn) another sparkling water? Perhaps it is no wonder that those of us of a certain age tend to be heavier drinkers than the younger generation: alcohol consumption in the UK fell 26% between 2002 and 2012, and the number of people aged 16-25 who drink little or not at all has risen by 40% in a decade. Most low-alcohol beers are still thin and dull, but Brew Dog’s Nanny State (around £1.25, widely available) is clean and hoppy, with body and balance, and stands up well against its alcoholic craft beer cousins. When it comes to wine, most with no or low alcohol tend to be fairly grim, too. Seedlip is a non-alcoholic, zero-calorie distilled drink that’s caused a stir even among die-hard drinkers. If you do like something fruity, try your hand at making shrubs, or “drinking vinegars”, as the hipsters call them. 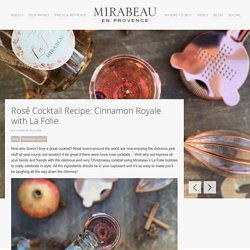 Rosé lovers around the world are now enjoying the delicious pink stuff all year round, but wouldn’t it be great if there were more rosé cocktails… Well why not impress all your family and friends with this delicious and very Christmassy cocktail using Mirabeau’s La Folie bubbles to really celebrate in style. All the ingredients should be in your cupboard and it’s so easy to make you’ll be laughing all the way down the chimney! Ingredients 1 bottle Mirabeau La Folie sparkling roséCinnamon Sugar SyrupFrozen Berries (preferably blackberries or blackcurrants) Method First of all, to make the cinnamon sugar syrup, simply add equal measures of sugar and hot water (e.g. 350ml of each but not boiling) into a pan and stir until all the sugar is dissolved.

Next, take your berries out of the freezer and leave in a bowl to defrost while you find your champagne flutes. Our Cinnamon Royales are built in the glass. Clos St Joseph, Villars-sur-Var - The Riviera GrapevineThe Riviera Grapevine. The destination for the first installment of the Saturday Wine Club (aka 5 ladies in search of their next glass of wine): Clos St Joseph in Villars-sur-Var. 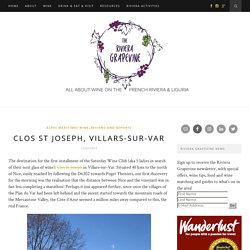 Situated 40 kms to the north of Nice, easily reached by following the D6202 towards Puget Theniers, our first discovery for the morning was the realisation that the distance between Nice and the vineyard was in fact less completing a marathon! Perhaps it just appeared further, since once the villages of the Plan du Var had been left behind and the ascent started towards the mountain roads of the Mercantour Valley, the Côte d’Azur seemed a million miles away compared to this, the real France. For some reason visiting Clos St Joseph has been my priority on the list of vineyards in the area to visit. I don’t want to rush these visits, due to a rather irrational fear running out of vineyards to blog about! For centuries the families of Villars-sur-Var owned plots of land where each grew enough grapes to satisfy their own consumption. Lidl’s bargain bordeaux: the ‘claret offensive’ Apparently it is referred to within the company as “the claret offensive” – Lidl’s much-publicised launch of a premium range of Bordeaux this Thursday is part of a £20m promotion to entice the middle classes away from Marks & Spencer and Waitrose. 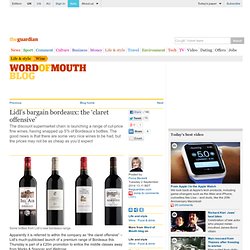 It’s not, of course, the first discount chain to have focused on fine wines. Arch-rival Aldi introduced a “super premium” range including bordeaux last Christmas, which generated sales of £1.35m (the average spend on a bottle from the range was an astonishing £19.35). And Tesco has been buying bordeaux en primeur (in advance of bottling) for a couple of years now to bring the sought-after 2009 and 2010 vintages to its customers. In a flash sale the other day it drastically reduced a number of bin ends including the 2007 Chateau la Conseillante from £71.50 to £44 a bottle and promises to release the 2010s it bought en primeur this Christmas. But why Bordeaux, rather than Burgundy or the Rhône? That said, it’s not worth going overboard. The Fine Wine Company, Buy Fine Wine online, Nationwide Delivery.