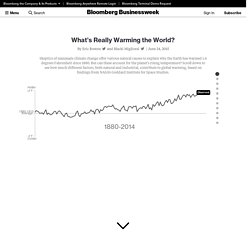 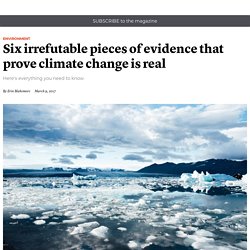 The facts are these: The climate of our planet is changing at a pace unlike anything seen in the natural fluctuations traced across geological records, and scientists have overwhelmingly traced this global warming trend to human activity. Unless you’re a supercomputer, you’ll find it virtually impossible to keep an eye on every single indicator of climate change. Here are a few that scientists use to monitor the planet: For more, check out this story on how we know climate change is happening—and that humans are causing it. For more on what we know about climate change, check out this story's companion piece—and our ongoing series on the Environmental Protection Agency.

Climate change: Plant evolution spurs fast migration, UBC study finds. Scientists may be underestimating how quickly the Earth’s plants can change location in response to climate change, according to a study from the University of B.C. 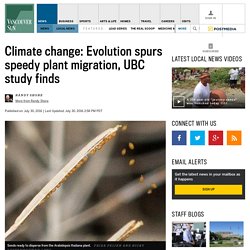 As the global average temperature rises, the comfort zones of many plants and trees are easing north or into higher elevations, but the speed with which they move is being driven by evolutionary responses. Plants cultivated to evolve were able to move 200 per cent further across difficult landscapes over six generations than plants with no evolutionary ability. In favourable landscapes, the advantage was only 11 per cent. “Our results show that evolution is a driving mechanism behind how fast plants can move and that evolution is making the migration move faster,” said lead author Jennifer Williams, a professor of geography.

“In the case of our plants, in the evolving populations, their seeds can disperse a bit further.” Warming could disrupt Atlantic Ocean current. Spewing too much carbon dioxide into the atmosphere could shut down the major ocean current that ferries warm water to the North Atlantic, new climate simulations suggest. 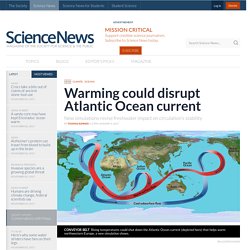 While not as extreme as the doomsday scenario portrayed in the movie The Day After Tomorrow, such a shutdown could cause wintertime temperatures to plummet by an estimated 7 degrees Celsius or more in northwestern Europe and shift rainfall patterns across the globe. Many previous climate simulations predicted that the Atlantic circulation would remain largely stable under future climate change. But those simulations failed to accurately portray how relatively freshwater flows between the Atlantic and Southern oceans, an important mechanism as the climate warms. After fixing that inaccuracy, Yale University climate scientist Wei Liu and colleagues set up an extreme climate scenario to test the current’s robustness.

Climate Science Special Report. Record surge in atmospheric CO2 seen in 2016. Image copyright Getty Images Concentrations of CO2 in the Earth's atmosphere surged to a record high in 2016, according to the World Meteorological Organization (WMO). 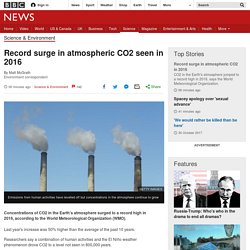 Last year's increase was 50% higher than the average of the past 10 years. Researchers say a combination of human activities and the El Niño weather phenomenon drove CO2 to a level not seen in 800,000 years. Scientists say this risks making global temperature targets largely unattainable. This year's greenhouse gas bulletin produced by the WMO, is based on measurements taken in 51 countries. Climate Visuals - Climate Outreach. Explaining science won’t fix information illiteracy. Photo illustration by Slate. 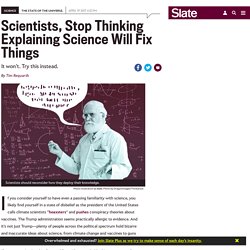 Photo by DragonImages/Thinkstock. If you consider yourself to have even a passing familiarity with science, you likely find yourself in a state of disbelief as the president of the United States calls climate scientists “hoaxsters” and pushes conspiracy theories about vaccines. The Trump administration seems practically allergic to evidence. And it’s not just Trump—plenty of people across the political spectrum hold bizarre and inaccurate ideas about science, from climate change and vaccines to guns and genetically modified organisms. If you are a scientist, this disregard for evidence probably drives you crazy.

It seems many scientists would take matters into their own hands by learning how to better communicate their subject to the masses. It’s an admirable goal, but almost certainly destined to fail. Before getting fired up to set the scientific record straight, scientists would do well to first consider the science of science communication. Special report: Living in denial. Community Climate Hub - Andrea Reimer webinar. Reality Hub – Climate Reality Presentations - Reality Hub. Community Climate Hubs. Reality Hub – Climate Reality Presentations - Reality Hub.