Tomorrow - a mystical land where 99% of all human productivity, motivation, and achievement is stored.

"When a person fails to begin a project that they care about, it’s typically due to either a) anxiety about their attempts not being “good enough” or b) confusion about what the first steps of the task are. Not laziness. In fact, procrastination is more likely when the task is meaningful and the individual cares about doing it well." Devon Price. Inside the mind of a master procrastinator [ TED Talk : Tim Urban ] The 5 Most Common Reasons We Procrastinate. Simone Weil on Temptation, the Key to Discipline, and How to Be a Complete Human Being.

By Maria Popova “Never react to an evil in such a way as to augment it.” 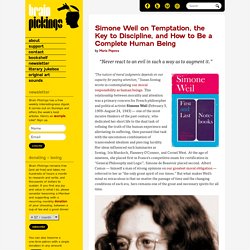 “The nature of moral judgments depends on our capacity for paying attention,” Susan Sontag wrote in contemplating our moral responsibility as human beings. This relationship between morality and attention was a primary concern for French philosopher and political activist Simone Weil (February 3, 1909–August 24, 1943) — one of the most incisive thinkers of the past century, who dedicated her short life to the dual task of refining the truth of the human experience and alleviating its suffering, then pursued that task with the uncommon combination of transcendent idealism and piercing lucidity. Her ideas influenced such luminaries as Sontag, Iris Murdoch, Flannery O’Connor, and Cornel West.

At the age of nineteen, she placed first in France’s competitive exam for certification in “General Philosophy and Logic”; Simone de Beauvoir placed second. Weil writes: In an entry shortly thereafter, she adds: The will. Tasks Management. The Mental Load. Instant Gratification. 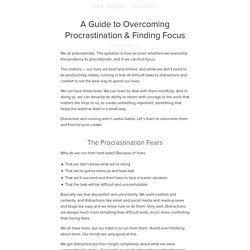 The question is how (or even whether) we overcome the tendency to procrastinate, and if we can find focus. This matters — our lives are brief and limited, and while we don’t need to be productivity robots, running in fear of difficult tasks to distractions and comfort is not the best way to spend our lives. We can face these fears. We can learn to deal with them mindfully. Distraction and running aren’t useful habits. The Procrastination Fears Why do we run from hard tasks? That we don’t know what we’re doingThat we’re gonna mess up and look badThat we’ll succeed and then have to face a scarier situationThat the task will be difficult and uncomfortable Basically, we fear discomfort and uncertainty. We all have fears, but our habit is to run from them.

Avoid Procrastination: Funky Tip Makes You Start 4 Times Sooner. This trick makes you feel closer to your future self so that you start four times sooner. 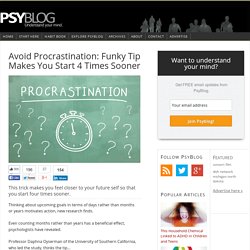 Thinking about upcoming goals in terms of days rather than months or years motivates action, new research finds. Even counting months rather than years has a beneficial effect, psychologists have revealed. Professor Daphna Oyserman of the University of Southern California, who led the study, thinks the tip… “…may be useful to anyone needing to save for retirement or their children’s college, to start working on a term paper or dissertation, pretty much anyone with long-term goals or wanting to support someone who has such goals.” Over 1,000 participants took part in four different studies to examine the phenomenon. People were encouraged to think about goals in terms of different time scales. For example, they either thought about saving for a college fund in 18 years or in 6,570 days.

Or, they thought about saving for retirement either in 30 years or in 10,950 days.

Procrastination Model. Books. Fear of What? Want to Procrastinate? Take Our Productivity Quiz. Posted by Jessi Craige on 25 Jan 2018 When it comes to productivity, everyone does things differently. 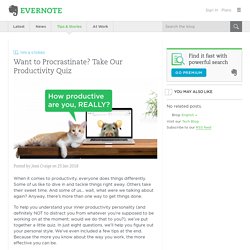 Some of us like to dive in and tackle things right away. Others take their sweet time. And some of us… wait, what were we talking about again? Anyway, there’s more than one way to get things done. To help you understand your inner productivity personality (and definitely NOT to distract you from whatever you’re supposed to be working on at the moment; would we do that to you?) Take the quiz: If you have trouble viewing the quiz above, click here to load it in a new window. Upgrade for features to help you live and work smarter.