"We look for partners who are kind, thoughtful, loyal, and funny. We stay with partners who avoid acting nasty, spiteful, resentful, and insecure. The presence of positives doesn't mean the absence of negatives.

Don't just seek the good. Avoid the bad." Roy Baumeister. Negativity Can Ruin Relationships. Read: What you lose when you gain a spouse But suppose you’ve managed to survive your courtship without any problems. 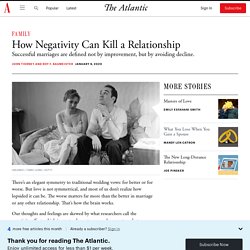 (This may take more imagination.) You’ve just graduated from dating to blissful matrimony. Your soul soars, your heart sings, and your brain is awash in oxytocin, dopamine, and other neurochemicals associated with love. You are probably in no mood to participate in a scientific study, but some other newlyweds were persuaded to do so for a long‑term project called PAIR. Some of the people were already ambivalent or hostile toward their partners—and tended to get divorced quickly—but most couples showed lots of mutual affection and went on to celebrate several anniversaries. Some couples, of course, are better off splitting up, but far too many of them sabotage a relationship that could have worked. 4 Essential Keys to a Happy Relationship. Why Speaking Well of Your Spouse Is So Important. As a leader, the health of your marriage directly affects the impact of your leadership. 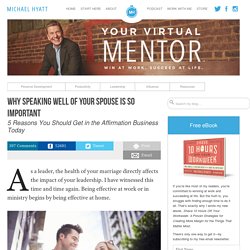 I have witnessed this time and time again. Being effective at work or in ministry begins by being effective at home. Early in our marriage, Gail and I attended a church led by a dynamic, thirty-something pastor. He was an extraordinary communicator. He was a wise and empathetic counselor. But as we got better acquainted with him and his wife, we started noticing a disturbing trend in the way they related to one another. At first, it seemed cute. We ultimately left that church. Are you ready to stop drifting and design a life you love? Conversely, I noticed that Sam Moore, my predecessor at Thomas Nelson, always spoke highly of his wife.

In reflecting on these two experiences, I am convinced that praising your spouse in public is one of the most important investments you can make—in your family and in your leadership. This is important for at least five reasons: 20 Signs Your Partner Is Controlling. Human Intimacy. The Difficult Art of Giving Space in Love: Rilke on Freedom, Togetherness, and the Secret to a Good Marriage. “Love one another but make not a bond of love: let it rather be a moving sea between the shores of your souls,” the great Lebanese-American poet, philosopher, and painter Kahlil Gibran counseled in what remains the finest advice on the secret to a loving and lasting relationship. 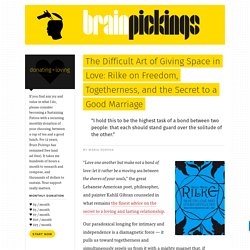 Our paradoxical longing for intimacy and independence is a diamagnetic force — it pulls us toward togetherness and simultaneously repels us from it with a mighty magnet that, if unskillfully handled, can rupture a relationship and break a heart. Under this unforgiving magnetism, it becomes an act of superhuman strength and self-transcendence to give space to the other when all one wants is closeness. And yet this difficult act may be the very thing — perhaps the only thing — that saves the relationship over and over. Two decades before Gibran, at the dawn of the twentieth century, another great poet of abiding insight into the turbulences of the human heart contemplated this predicament. Love Commitment. Desire. Dating. 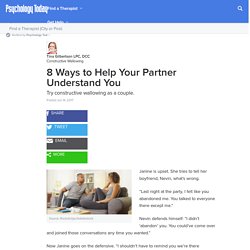 She tries to tell her boyfriend, Nevin, what’s wrong. “Last night at the party, I felt like you abandoned me. You talked to everyone there except me.” Nevin defends himself: “I didn’t ‘abandon’ you. Now Janine goes on the defensive. 5 Tips for Preventing Marriage Burnout. How to Become Your Spouse’s Best Friend. What does marriage have to do with leadership? 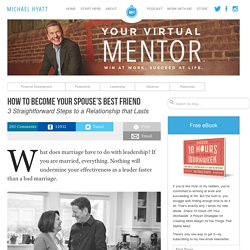 If you are married, everything. Nothing will undermine your effectiveness as a leader faster than a bad marriage. Your marriage is a living example of what it is like to be in a close relationship with you. This is why it is so important that leaders get this right if they want to influence others. Getting Our Needs Met. How to Make a Marriage Work. By Leo Babauta I’ve been happily married 11 years, and I’m still as in love with my beautiful wife Eva now as when I first fell for her 13 years ago. 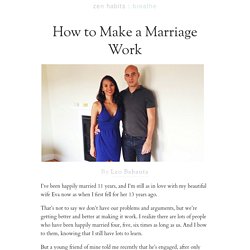 That’s not to say we don’t have our problems and arguments, but we’re getting better and better at making it work. I realize there are lots of people who have been happily married four, five, six times as long as us. And I bow to them, knowing that I still have lots to learn. But a young friend of mine told me recently that he’s engaged, after only starting to date a very short time ago … and I offered him the advice below. I had a failed young marriage, which I now think was not the fault of either me or my ex-wife, but it taught me that I had a lot to learn and made a lot of mistakes. So … some thoughts on making a marriage work: Learn to resolve disputes with the other person’s heart in mind.