Help, my Mommy is a Psychopath! Psychopaths (also known as volatile or dangerous Sociopaths), have personality disorders. 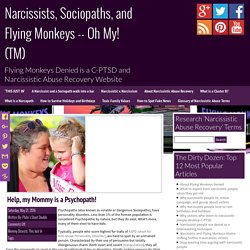 Less than 1% of the human population is considered Psychopathic by nature, but they do exist. What’s more, many of them elect to have kids. Typically, people who score highest for traits of ASPD (short for Anti-Social Personality Disorder), are hard to spot by an untrained person. Characterized by their use of persuasive but totally disingenuous charm (both overt and covert manipulation), they all have the propensity to revel in the use of pathological lies or deception. Totally lacking remorse for their pervasive targeting of their preferred scapegoat targets for abuse, they make their way into friendship circles, online dating sites, and into social environments seeking new narcissistic supply sources to use and abuse. Their continual vomiting of hate speech and projection of their own hyped narcissistic rivalries makes them the worst possible character type of person to raise children.

No. When Shame feels Mothering: The Tragedy of Parentified Daughters. Bethany Webster The road between a little girl and her mother is supposed to be a one-way street with support flowing consistently from the mother to the daughter. 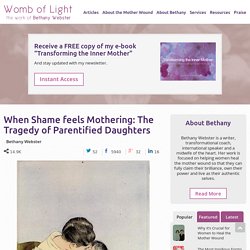 It goes without saying that little girls are totally dependent on their mothers for physical, mental and emotional support. However, one of the many faces of the mother wound is the common dynamic in which the mother inappropriately depends on the daughter to provide her with mental and emotional support. This role-reversal is incredibly damaging to the daughter, having long-range effects on the her self-esteem, confidence and sense of self-worth. Alice Miller describes this dynamic in "The Drama of the Gifted Child. " The young daughter then has to repress her own developmental needs in order to accommodate the emotional needs of the mother. A daughter is being exploited when her mother gives her adult roles, such as surrogate spouse, best friend or therapist. The message is there's not enough mothering or love to go around.

For those of you whose Nparent plead mental illness... Abusive parents: What do grown children owe the mothers and fathers who made their childhood a living hell? Illustration by Charlie Powell What do we owe our tormentors? 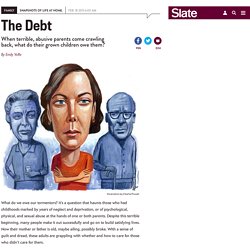 It’s a question that haunts those who had childhoods marked by years of neglect and deprivation, or of psychological, physical, and sexual abuse at the hands of one or both parents. Despite this terrible beginning, many people make it out successfully and go on to build satisfying lives. Now their mother or father is old, maybe ailing, possibly broke. With a sense of guilt and dread, these adults are grappling with whether and how to care for those who didn’t care for them. Emily Yoffe is a contributing editor at the Atlantic. Rochelle, 37, wrote to me in my role as Slate’s Dear Prudence because of the pressure she was getting from friends to reach out to her mother. Rochelle started waitressing when she was 15. That was Rochelle’s breaking point—after that, she didn’t see her mother for the next 13 years.

The visits took a toll. There is no formula for defining one’s obligations to the parents who didn’t fulfill their own. Here's why psychopaths are unable to love their own children - ScienceAlert. The aftermath of psychopathy as experienced by: romantic partners, family members and other victims. By Linda S. 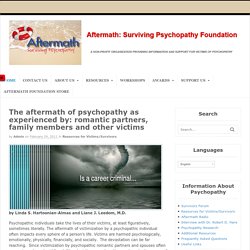 Hartoonian-Almas and Liane J. Leedom, M.D. Psychopathic individuals take the lives of their victims, at least figuratively, sometimes literally. The aftermath of victimization by a psychopathic individual often impacts every sphere of a person’s life. Victims are harmed psychologically, emotionally, physically, financially, and socially. In one recent survey[i] of women who reported involvement with individuals with psychopathic features, they reported the following harm: There are five sources for the information found in this resource including the above survey.

Psychological and Emotional Harm By psychological and emotional harm, we mean effects on the way victims think and feel. Life with a psychopathic individual is characterized by outright lies, slight omissions, and clever manipulations. It is not unusual for the victims of psychopaths to question their sanity and self worth. Psychopathic individuals may even try to convince victims that it is they who are “crazy.” The Narcissist and Children - The Narcissistic Life. Raised by a Narcissist? 11 Healing Things to Do for Yourself Right Now.