"Bitcoin is a decentralized peer-to-peer financial and monetary system which enables financial sovereignty, censorship resistant payments and digital scarcity. Its main use-cases are digital cash, because it is a bearer asset, and digital gold, because it acts as a store of value.

" Francis Pouliot. Money is simply a tool for moving value across spacetime. "Reminder: the dollar is *already* digital." How Bitcoin Can Protect Free Speech in the Digital Age. Think about what happens when you buy a newspaper at a local cafe with cash. 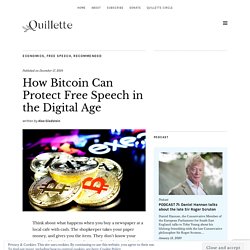 The shopkeeper takes your paper money, and gives you the item. They don’t know your name, address, phone number, email, or what you bought yesterday. They are not collecting any data about you. Until now, this level of financial privacy was perfectly normal. Today, cash is disappearing. When you buy a subscription to a political magazine like this one, you almost certainly do so with a credit card or through a platform like PayPal.

In Hong Kong, pro-democracy demonstrators need to use the public transit system to get from home or office to protest point. But what happens when cash disappears, as we know it will in the coming decades? Peer-to-Peer Networks Explained. What is peer-to-peer (P2P)? 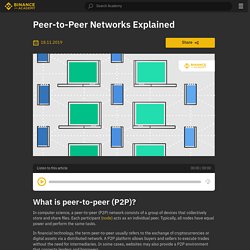 In computer science, a peer-to-peer (P2P) network consists of a group of devices that collectively store and share files. Each participant (node) acts as an individual peer. Typically, all nodes have equal power and perform the same tasks. In financial technology, the term peer-to-peer usually refers to the exchange of cryptocurrencies or digital assets via a distributed network. A P2P platform allows buyers and sellers to execute trades without the need for intermediaries. P2P architecture can be suitable for various use cases, but it became particularly popular in the 1990s when the first file-sharing programs were created. How does P2P work?

In essence, a P2P system is maintained by a distributed network of users. On P2P networks, the connected devices share files that are stored on their hard drives. Put in another way, when a node acts as a client, they download files from other network nodes. Unstructured P2P networks Structured P2P networks. The Monetary Case for Bitcoin. The introduction of Bitcoin to the world ten years ago as a new monetary system sparked new interest in the field of monetary economics. 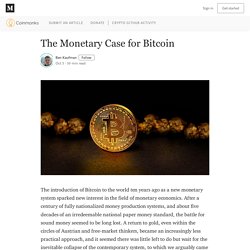 After a century of fully nationalized money production systems, and about five decades of an irredeemable national paper money standard, the battle for sound money seemed to be long lost. A return to gold, even within the circles of Austrian and free-market thinkers, became an increasingly less practical approach, and it seemed there was little left to do but wait for the inevitable collapse of the contemporary system, to which we arguably came close several times.¹ The fight in the intellectual arena was seemingly over as well, both from the academic view and the general public acceptance.

With very few exceptions, such as with the case of Friedrich Hayek, most prominent economists acknowledged by public endorsement were followers of the Keynesian monetary approach. The second aspect we may look at is the actual costs of operating such a system. Carl Menger on Currency Durability: A Lesson on Cryptos? "Theory of Money and Credit" by Ludwig von Mises. What digital cash means. "Bitcoin can be best understood as distributed software that allows for transfer of value using a currency protected from unexpected inflation without relying on trusted third parties" 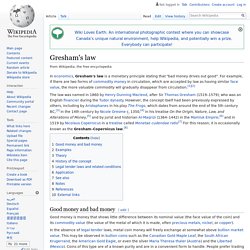 For example, if there are two forms of commodity money in circulation, which are accepted by law as having similar face value, the more valuable commodity will gradually disappear from circulation.[1][2] The law was named in 1860 by Henry Dunning Macleod, after Sir Thomas Gresham (1519–1579), who was an English financier during the Tudor dynasty. Good money and bad money[edit] Good money is money that shows little difference between its nominal value (the face value of the coin) and its commodity value (the value of the metal of which it is made, often precious metals, nickel, or copper). The price spread between face value and commodity value is called seigniorage.

In Gresham's day, bad money included any coin that had been debased. Examples[edit] Theory[edit] History of the concept[edit] Application[edit] See also[edit] You Don’t Understand Bitcoin Because You Think Money Is Real. Fungibility. Decentralization.