China State Media Make Rare Reports Calling Crypto 2020's Best Performing Asset. Top 10 Narratives for 2020. Infrastructure Trends & Crypto Company Predictions for 2020. 1 Institutional Trading Tools, Custody, & Compliance It took a while for Bakkt to get out of the gates, but the ICE-backed crypto futures exchange has been steadily (if slowly) gaining market share vs. 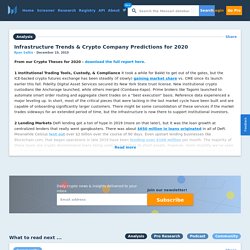 CME since its launch earlier this fall. Fidelity Digital Asset Services secured its New York State trust license. New institutional crypto custodians like Anchorage launched, while others merged (Coinbase-Xapo). Prime brokers like Tagomi launched to automate smart order routing and aggregate client trades on a “best execution” basis. Reference data experienced a major leveling up. 2 Lending Markets DeFi lending got a ton of hype in 2019 (more on that later), but it was the loan growth at centralized lenders that really went gangbusters. Despite the growth, lending is still an immature and underpenetrated market. 3 Major Data / Research Upgrades. Case in point, I checked the 24 hour trading volume on OKEx according to five different top data providers, and got this as the result: 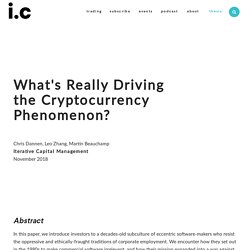 Chris Dannen, Leo Zhang, Martín Beauchamp Iterative Capital Management November 2018 Abstract In this paper, we introduce investors to a decades-old subculture of eccentric software-makers who resist the oppressive and ethically-fraught traditions of corporate employment. We encounter how they set out in the 1980s to make commercial software irrelevant, and how their mission expanded into a war against all forms of institutional oversight.

We examine their approach to organizing volunteer software production in service of this war, and how their methods produced successful software. Disclosure Iterative Capital is a cryptocurrency mining investment manager and its subsidiaries include a wholesale dealer which sells cryptocurrencies. Keeping Digital Communities Weird. 12 Graphs That Show Just How Early The Cryptocurrency Market Is. From the time the first website was published in 1991 until today, the internet has profoundly reshaped humanity. 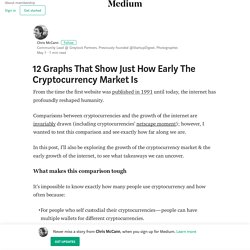 Traders on the floor of the New York Stock Exchange on December 6. 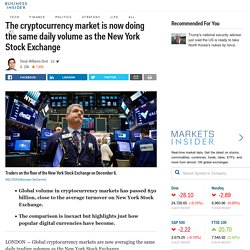 REUTERS/Brendan McDermid Global volume in cryptocurrency markets has passed $50 billion, close to the average turnover on New York Stock Exchange. The comparison is inexact but highlights just how popular digital currencies have become. LONDON — Global cryptocurrency markets are now averaging the same daily trading volumes as the New York Stock Exchange. Twenty-four-hour trade volume in the cryptocurrency market passed the $50 billion mark on Wednesday, according to the data provider CoinMarketCap.com. A Beginner's Introduction to Cryptoeconomics. Contents What is cryptoeconomics? 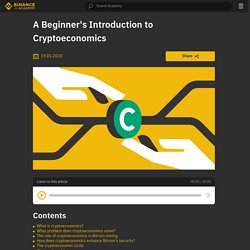 Rather than being a subset of traditional economics, cryptoeconomics is a mix of game theory, mechanism design, mathematics, and other methodologies from the field of economics. 10 Awesome Uses of Cryptocurrency. 100 cryptocurrencies described in four words or less. The Definitive Crypto guide – For Beginners and Veterans Alike. Doubts about the Long-Term Viability of Utility Cryptoassets. I’m increasingly sceptical about the long-term value of utility tokens. 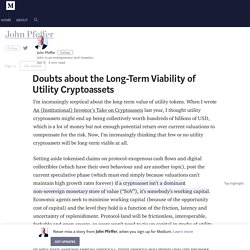 When I wrote An (Institutional) Investor’s Take on Cryptoassets last year, I thought utility cryptoassets might end up being collectively worth hundreds of billions of USD, which is a lot of money but not enough potential return over current valuations to compensate for the risk. Now, I’m increasingly thinking that few or no utility cryptoassets will be long-term viable at all. Setting aside tokenised claims on protocol-exogenous cash flows and digital collectibles (which have their own behaviour and are another topic), post the current speculative phase (which must end simply because valuations can’t maintain high growth rates forever) if a cryptoasset isn’t a dominant non-sovereign monetary store of value (“SoV”), it’s somebody’s working capital. The rise and fall of crypto narratives. The rise and fall of crypto narratives Quantum Superposition If you like audiobooks, I’ve done a voiceover of this article which is available to listen to on Soundcloud and YouTube. 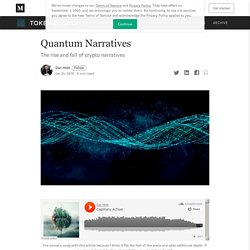 In 1935, scientists wrote an article called “The EPR Paradox” which described the strange situation of quantum superpositions, in which systems can exist in multiple states corresponding to different outcomes simultaneously. In effect, the paper argued that there wasn’t only one but in fact multiple “true” realities. Each of these realities would remain valid until they were interacted with or observed by the external world.