Wildfires rage, Covid spreads: in California, life as we knew it has disappeared. At 10am on 16 August, I drove east from Santa Cruz to Oakland to my mom’s nursing home, where I was being allowed in, in full PPE, to kiss her a last goodbye. 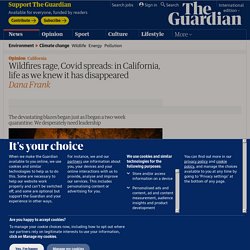 As I curved north through San Jose, I could see a billowing steel-gray fire cloud among the hills to the east. Lightning flashed past Berkeley as I pulled into the parking lot. On the way home, I took the long route across the San Mateo Bridge, then over the top of the San Francisco Peninsula and south from Half Moon Bay. Halfway down the coast I saw a helicopter dropping bright red pillows of retardant on to a fire streaming its smoke in a flat horizontal panel out to the ocean.

Ten minutes later I passed white smoke pouring down another canyon on my left. Beirut blast: The inferno and the mystery ship. Fire raining on beaches, red skies and a billion animals killed: the new Australian summer. Sometimes you can see the end of the old world and the beginning of the new one as clearly as a seam. 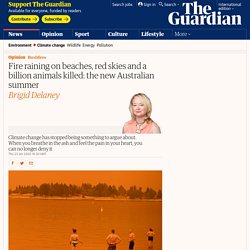 Transformations that were once barely perceptible, recognisable only after the fact, this summer have become akin to a crossing. You can see the line as you step over it. It’s the first summer of this new decade. Welcome. History as a giant data set: how analysing the past could help save the future. In its first issue of 2010, the scientific journal Nature looked forward to a dazzling decade of progress. 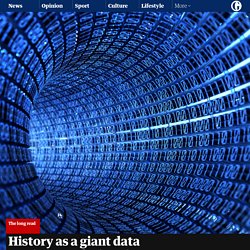 By 2020, experimental devices connected to the internet would deduce our search queries by directly monitoring our brain signals. Crops would exist that doubled their biomass in three hours. Humanity would be well on the way to ending its dependency on fossil fuels. A few weeks later, a letter in the same journal cast a shadow over this bright future.

It warned that all these advances could be derailed by mounting political instability, which was due to peak in the US and western Europe around 2020. Bündner Dorf Brienz/Brinzauls: Wenn der Berg kommt. How to identify a body: the Marchioness disaster and my life in forensic pathology. I took a call early one Sunday morning in August 1989 to warn me that there had been a disaster. 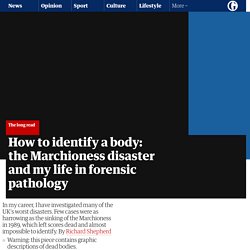 Tasmania is burning. The climate disaster future has arrived while those in power laugh at us. As I write this, fire is 500 metres from the largest King Billy pine forest in the world on Mt Bobs, an ancient forest that dates back to the last Ice Age and has trees over 1,000 years old. 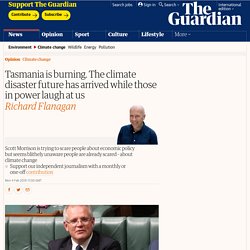 Fire has broached the boundaries of Mt Field national park with its glorious alpine vegetation, unlike anything on the planet. Fire laps at the edges of Federation Peak, Australia’s grandest mountain, and around the base of Mt Anne with its exquisite rainforest and alpine gardens. Fire laps at the border of the Walls of Jerusalem national park with its labyrinthine landscapes of tarns and iconic stands of ancient pencil pine and its beautiful alpine landscape, ecosystems described by their most eminent scholar, the ecologist Prof Jamie Kirkpatrick, as “like the vision of a Japanese garden made more complex, and developed in paradise, in amongst this gothic scenery”.

Five years ago I was contacted by a stranger, Prof Peter Davies, an eminent water scientist. I was shocked. 'Magma shift' may have caused mysterious seismic wave event. It is the kind of mystery scientists relish. 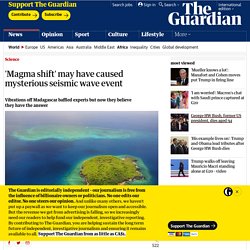 On 11 November, something stirred near the French island of Mayotte off the west coast of Madagascar and sent a rumble around the world. Travelling at 9,000mph, the deep hum hurtled past earthquake detection systems unnoticed. No one appears to have felt a thing. The event came to light on Twitter when seismology enthusiasts posted weird signals they had spotted in recordings made by seismic stations from Kenya to Hawaii. Having ruled out the violent lurches of an earthquake, educated guesses gave way to more fanciful theories. Now researchers believe they have an answer. By looking at when different seismic stations dotted around the planet detected the rumble, the 30-minute or so signal was traced back to an event that took place at about 9.30am GMT in the sea near Mayotte. The Mayotte vibrations took about 40 minutes to reach Britain, and an hour and 15 minutes to reach Hawaii, more than 11,000 miles from their point of origin. 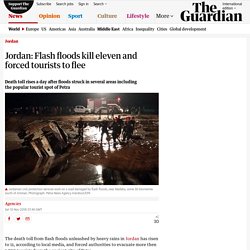 Saturday’s reports came a day after floods struck in several areas of Jordan, including Petra, and the searches for missing people continue. Government spokeswoman Jumana Ghuneimat and civil defence officials say the death toll rose early on Saturday, after another body was found in the Madaba region south of the capital of Amman. Hundreds of Petra visitors ran for higher ground on Friday as water surged through a narrow canyon leading to the Treasury, Petra’s main attraction. The visitors were taken to safe areas before flash floods inundated parts of the mountainous city famed for its carved rock ruins, government spokeswoman Jumana Ghunaimat said. Authorities declared a state of emergency in the Red Sea port city of Aqaba further south as downpours started in the afternoon.