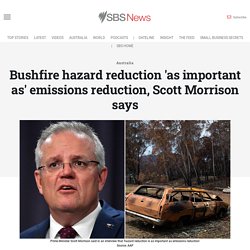 Mr Morrison has also revealed the government was considering a way to name and shame states which don't complete required hazard reduction burns. "Hazard reduction is as important as emissions reduction," the prime minister told Sky News on Tuesday. "Many would argue even more so, because it has a direct practical impact on the safety of a person going into a bushfire season. " Mr Morrison flagged clear national standards for meeting hazard reduction targets, along with a review of land-clearing laws, native vegetation rules and allowing grazing in national parks. "We report all the time on what our emissions reductions are, but across the country there is not a national system of reporting to track how hazard reduction is progressing," he said.

ICYMI Australia is on fire. Things u can do: 1. Donate. 2. GiveUpMeat 3. Vote liberals out. #AustralianBushfires… Green Planet sur Twitter : "*New #bushfires video* PM @ScottMorrisonMP told @abcnews even if #Australia shut all its coal power stations, the impact on climate change would be minimal because of China. But.. Australia emits far more per person than China. Climate Cartoon of the day: Climate denying fingers @JeffBellNZ #AustralianBushfires… Scott Morrison looks for wriggle room on climate as he detects the whiff of backlash. It’s too early to say whether the prime minister, Scott Morrison, is speaking with a forked tongue when he says the government will “evolve” its climate change policy. 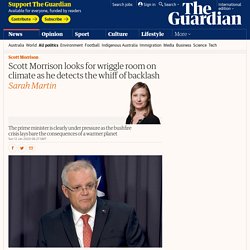 What appeared on Sunday to be a shift in rhetoric on the government’s emission reduction targets may be meaningful – or it may yet prove to be deliberately duplicitous. Morrison is clearly under pressure on the government’s unambitious climate change policy, an issue that may have remained conceptual for some if not for the horror bushfire crisis that has laid bare the consequences of a warmer planet. For months, the prime minister has refused to yield on calls for more ambitious action, saying the government was doing enough and would “meet and beat” its Paris target of reducing emissions by 26% to 28% of 2005 levels by 2030. Despite his ill-judged family holiday to Hawaii, and what was arguably a tardy national response to the fires, Morrison is not politically naive.

A conservative Queenslander who works in a coal seat? NSW fires: Michael McCormack dismisses climate change link for Mid North-Coast blazes. Related Article "It is disgraceful, it is disgusting and I'll call it out every time," he said. 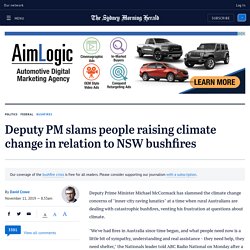 Glen Innes council mayor Carol Sparks, the first Greens member to hold that position, said last week "there's no doubt" climate change was contributing to drought and the lack of rain and said Prime Minister Scott Morrison should act on this. Asked about that comment, Mr McCormack said on Monday morning that Australia was getting drier and the "situation in parts are getting very, very warm" but the government was acting on climate change. "What we are doing is taking real and meaningful action to reduce global emissions without shutting down all our industries," he said. "Adam Bandt is very quick to really point the finger. "If that doesn't get called out he gets away with it. Reminder: Nationals leader Michael McCormack said in November it was "disgraceful, disgusting" to link climate change with bushfires. "We've had fires in Australia since time began" he said, slamming.

*****Australia’s pathetic PM reveals much about the right’s effort to deny reality. There are worse leaders than Scott Morrison. 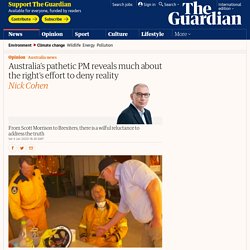 The “international community” includes torturers, mass murderers, ethnic cleansers and kleptomaniacs beside whom he seems almost benign. But no leader in the world is more abject than the prime minister of Australia. He cuts a pathetic figure. A leader must speak honestly to his people in a crisis. The sly tactics of climate change denial, the false consoling words that it’s a scare and we can carry on as before, have left Morrison’s words as meaningless as a hum in the background. Scott Morrison: So Who the Bloody Hell Are You?: In a country that has always exhibited a fickle streak towards foreigners heading for its shores, Scott Morrison is especially well credentialled to speak on the subject of his shadow portfolio, immigration. 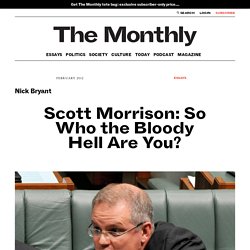 The Liberal politician who has spent much of the past 18 months regurgitating the phrase ‘stop the boats’ was also the managing director of Tourism Australia, who asked the rest of the world: ‘Where the bloody hell are you?’ The member for Cook, who counts Desmond Tutu and the anti-slavery campaigner William Wilberforce among his heroes, reportedly argued in shadow cabinet that the Liberals should exploit community concerns about Muslim immigrants. The man who attests that his faith has imbued him with “the values of loving kindness, justice and righteousness” also tried to make political hay when relatives of asylum seekers killed in the boat tragedy off Christmas Island in December 2010 were flown at taxpayers’ expense to attend their loved ones’ funerals in Sydney.

Nick Bryant. #Australia picked a winner with this guy. #AustraliaBushfires…