MolView. The Model menu contains some general functions for the 3D model. 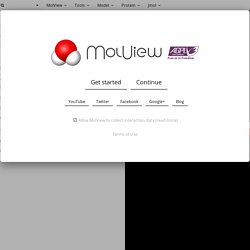 Reset This function sets the model position, zoom and rotation back to default. Representation You can choose from a list of different molecule representations including; ball and stick, stick, van der Waals spheres, wireframe and lines. Macromolecules are automatically drawn using ribbons. Background You can switch between a black, gray or white background. Engines You can choose from three different render engines: GLmol, Jmol and ChemDoodle. MolView automatically switches to: Jmol if you execute functions from the Jmol menu GLmol if you load macromolecules (due to significant higher performance) ChemDoodle if you load a crystal structure (GLmol cannot render crystal structures) You might want to switch back to GLmol when you do no longer need Jmol or ChemDoodle since GLmol has a better performance. 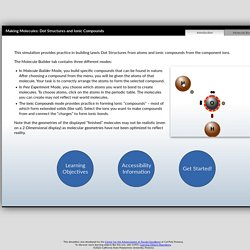 Small screen devices such as tablets and smartphones are not recommended for this simulation. The Molecular Builder tab contains two different modes: In Molecule Builder Mode, you build specific compounds that can be found in nature. After choosing a compound from the drop down menu, you will be given the atoms of that molecule. Your task is to correctly arrange the atoms to form the listed compound.In Free Experiment Mode, you choose which atoms you want to bond to create molecules.

Note that the geometries of the displayed “finished” molecules may not be realistic (even on a 2-Dimensional display) as molecular geometries have not been optimized to reflect reality. The Ionic Compounds tab provides practice in forming ionic “compounds” – most of which form extended solids (like salt). 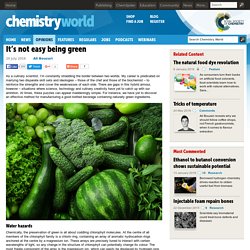 My career is predicated on marrying two disparate skill sets and ideologies – those of the chef and those of the biochemist – to reinforce the strengths and cover the weaknesses of each side. There are gaps in this hybrid armour, however – situations where science, technology and culinary creativity have yet to catch up with our ambition. At times, these puzzles can appear maddeningly simple. For instance, we have yet to discover an effective method for manufacturing a good bottled beverage containing naturally green ingredients. Water hazards Chemically, the preservation of green is all about coddling chlorophyll molecules. This effect is enhanced in acidic environments, which cooks have long combated by using neutral or alkaline water for blanching green vegetables, thus minimising the number of hydrogen ions vying for a place at the centre of the chlorin ring. Turning up the heat Ingredients.

11 Coulombic Attraction-S - 11_coulombic_attraction-s.pdf. 30 Bond Energy-S - 30_bond_energy-s.pdf. 91560 Graphite Disk Demonstration - 91560.pdf. Tst1504_29. Chemists Confirm the Existence of New Type of Bond. Chemistry has many laws, one of which is that the rate of a reaction speeds up as temperature rises. 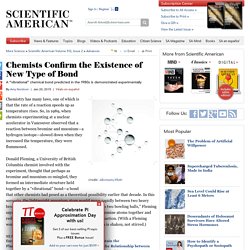 So, in 1989, when chemists experimenting at a nuclear accelerator in Vancouver observed that a reaction between bromine and muonium—a hydrogen isotope—slowed down when they increased the temperature, they were flummoxed. Donald Fleming, a University of British Columbia chemist involved with the experiment, thought that perhaps as bromine and muonium co-mingled, they formed an intermediate structure held together by a “vibrational” bond—a bond that other chemists had posed as a theoretical possibility earlier that decade.

In this scenario, the lightweight muonium atom would move rapidly between two heavy bromine atoms, “like a Ping Pong ball bouncing between two bowling balls,” Fleming says. The oscillating atom would briefly hold the two bromine atoms together and reduce the overall energy, and therefore speed, of the reaction.