Screen time for pre-adolescents: When is it too much?

Hopscotch, Catching and Zero-point. These were some of my favourite games that I played when I was in my younger years. Being born in the early 1980s, my childhood was spent playing these games with my neighbours at the common corridor or the playground near my house.

Long lasting friendships were made and many of my good friends till now are friends from my childhood neighbourhood.

I grew up in the era where the television set had buttons on the side which I have to walk up to it and press the buttons to change the channel. Television channels were only shown at certain times of the day, often at mid-morning till midnight. My favourite cartoon was Inspector Gadget which was what I look forward to watching on Saturday mornings.

When I was 11 years old, I was introduced to this game box called Nintendo, where I spent a huge part of my time playing Super Mario Brothers in front of the television. It was the most fascinating game around then and because of the price of the device, it was a luxury to be able to own a set.

Fast forward 30 years, the childhood of children has changed. As my job requires me to work with children ranging from 5 years old to 16 years old, I notice that children today are entirely different from my time. Their lives are fixated to a small box and screen called the mobile phone from as young as 7 years old. Many children own these gadgets and it has become a part of their lives. Instead of moving their whole body, their thumbs are the busiest body part, playing mobile games or connect with their friends through Facebook, Instagram or WhatsApp. Nearly everything around them does not require them to operate manually. Television sets come with a remote control so the buttons can be clicked with just a finger. Many children hardly play outside with the neighbours and they would rather spend their time watching cable television, which runs for 24 hours, 7 days a week. 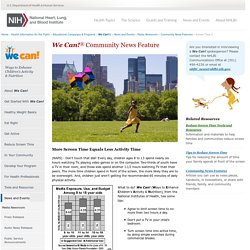 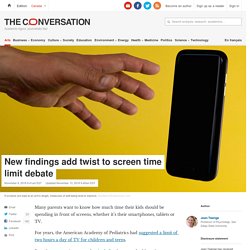 For years, the American Academy of Pediatrics had suggested a limit of two hours a day of TV for children and teens. But after screen time started to include phones and tablets, these guidelines needed an update. So last year, the American Academy of Pediatrics changed its recommendations: No more than one hour of screen time for children ages 2 to 5; for older children and teens, they caution against too much screen time, but there’s no specific time limit. This may give the impression that preschoolers are the only ones who need specific limits on screen time, with monitoring less important for older children and teens. Social media and kids: What age do they start? "If you have a teen or tween, you should expect them to come home around the beginning of the school year and say, 'Oh, I want to download so-'n'-so,' " said Caroline Knorr, a San Francisco-based parenting expert with the nonprofit organization Common Sense Media. 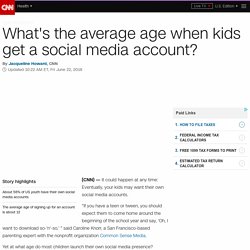 In the United States, "our understanding is that about half of kids have some form of social media by age 12," Knorr said, referencing a Common Sense Media census report released in 2016. The report was based on a nationally representative survey of 1,786 parents in the United States whose children are 8 to 18. The survey was conducted in July 2016. The report found that, overall, 56% of the children had their own social media accounts, based on the parents' survey responses. Among those children, the parents reported that the average age when initially signing up for the account was 12.6 years. Kids 'using gadgets at earlier age being exposed to risks': Study, Singapore News. Children using electronic gadgets like smartphones at a younger age are increasingly exposed to certain social and health risks that come with it. 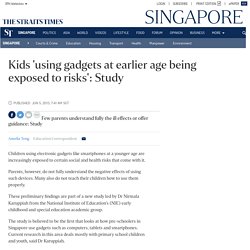 Parents, however, do not fully understand the negative effects of using such devices. Many also do not teach their children how to use them properly. These preliminary findings are part of a new study led by Dr Nirmala Karuppiah from the National Institute of Education's (NIE) early childhood and special education academic group. The study is believed to be the first that looks at how pre-schoolers in Singapore use gadgets such as computers, tablets and smartphones. Current research in this area deals mostly with primary school children and youth, said Dr Karuppiah.

The study, which is funded by the Health Promotion Board and NIE, was presented yesterday at the Redesigning Pedagogy International Conference. Researchers of the NIE study visited the homes and schools of 60 children from five pre-schools last year to observe their computer habits. How screen time affects children. Study makes surprising link between TV time and childhood obesity. Screen Media Exposure and Obesity in Children and Adolescents.

There’s Worrying New Research About Kids’ Screen Time and Their Mental Health. With teen mental health deteriorating over five years, there's a likely culprit. Around 2012, something started going wrong in the lives of teens. 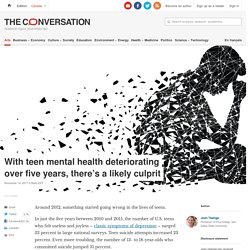 In just the five years between 2010 and 2015, the number of U.S. teens who felt useless and joyless – classic symptoms of depression – surged 33 percent in large national surveys. Teen suicide attempts increased 23 percent. Even more troubling, the number of 13- to 18-year-olds who committed suicide jumped 31 percent. In a new paper published in Clinical Psychological Science, my colleagues and I found that the increases in depression, suicide attempts and suicide appeared among teens from every background – more privileged and less privileged, across all races and ethnicities and in every region of the country.

All told, our analysis found that the generation of teens I call “iGen” – those born after 1995 – is much more likely to experience mental health issues than their millennial predecessors. What might explain the unhappiness epidemic? We’d all like to be a little happier. 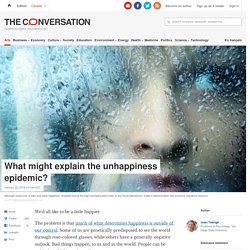 The problem is that much of what determines happiness is outside of our control. Some of us are genetically predisposed to see the world through rose-colored glasses, while others have a generally negative outlook. Social Media and Suicide: A Public Health Perspective. 9 Health Hazards of Electronic Devices for Kids. Screen Time and Sleep among School-Aged Children and Adolescents: A Systematic Literature Review. How Does Screen Time Affect Kids' Brains? Getting children away from screens. Powerofpositivity. Guidelines on technology use. References.