29 Genius Recipes to Freeze Now (Because It's About to Get Crazy) Homemade Spicy Ramen with Tofu Recipe. Click here to Pin this recipe Homemade Ramen is lyfe. 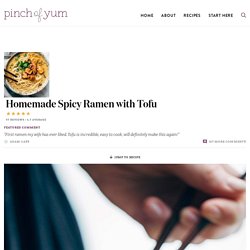 This One Genius Ingredient Will Make Better, Quicker Soups. Bake Crunchy Croutons Directly into Your Soup, Win at Life. I think we can all agree that, more often than not, a bowl of soup, a hearty stew, or a saucy braise is only improved by the addition of bread. 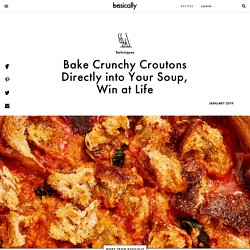 Sometimes that’s a hunk of freshly baked baguette. Other times a buttery dinner roll. Bread is the staff of life, as they say. But lately it feels like that phrase should be amended to “fried bread is the staff of life.” Everywhere I look somebody (myself included) is frying a thick slice of sourdough bread in a slick of olive oil until crunchy and golden brown on one side, soft and doughy on the other, and serving it alongside any saucy concoction worthy of soaking. How to make Dashi Stock with Bonito and Kombu. Nowadays most Japanese people choose to use instant dashi granules rather than making dashi from scratch. 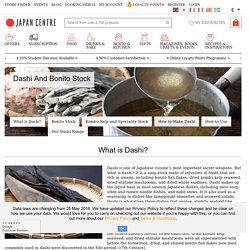 However, making your own dashi is easier than you might think, and if you are hoping to learn to prepare truly authentic Japanese food, it would be well worth learning how to make your own dashi soup stock. To make a mixed bonito fish and kombu kelp dashi, follow the instructions below. Step 1 Assemble 20g dried kombu kelp, 30g bonito fish flakes, and 1L water.

Step 2 Clean your kombu kelp by gently wiping it down with a damp cloth. Do not clean off any of the powdery white substance from the kombu, as this is some of the umami flavour that you will want in your dashi. Step 3 Cut a couple of slits into your kombu, then add it and your water to a saucepan. Step 4 Bring the dashi to a near-boil over a low to medium heat. Step 5 When you start to see bubbles around the edge of the pan, take the pan off the heat and remove the kombu. How to make Dashi Stock with Bonito and Kombu. Miso Ramen With Crispy Pork and Burnt Garlic-Sesame Oil Recipe. Ramen-recipe-o-ya. Ma recette, vite fait, bien fait, de la soupe de nouilles aux crevettes et curry rouge. The nourishing bone broth recipe you need to master. Paul Bertolli's Cauliflower Soup Recipe on Food52. Ribollita - Tuscan White Bean Soup. This day will never come again. 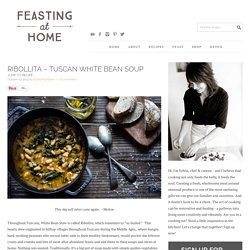 ~Merton Throughout Tuscany, White Bean Stew is called Ribollita, which translates to “re-boiled.” This hearty stew originated in hilltop villages throughout Tuscany during the Middle Ages, where hungry, hard-working peasants who served table-side to their wealthy landowners, would pocket the leftover crusts and crumbs and bits of meat after abundant feasts and add these to their soups and stews at home. Miso Soup With Mixed Seasonal Vegetables. Pressure Cooker French Onion Soup. My Legendary French Onion Soup – My French Heaven. Here is a dish that is a true pillar of the French culinary tradition! 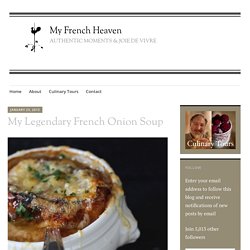 One would even say an icon of traditional French cuisine. I had posted about this years ago, but I thought we were due for a refresher post. Plus it’s so darn cold outside :0) Try the recipe and tell me how it was. For the anecdote, the onion soup was called the soup of the drunks, because it hides very well the smell of red wine: 0) My recipe seems so simple that you could be tempted to add beer, wine or beef/chicken broth. For 3 bowls: – Cut 9 small yellow onions into thin strips (small onions have more flavor and less water) and sauté them in butter. . – Sprinkle a small tablespoon of flour and mix well – Add 1.5 liters of water and let simmer for about 15mn. 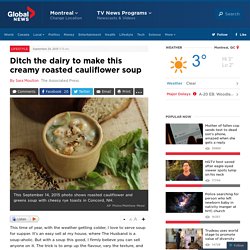 It’s an easy sell at my house, where The Husband is a soup-aholic. But with a soup this good, I firmly believe you can sell anyone on it. The trick is to amp up the flavour, vary the texture, and make it substantial. Here I started by roasting — not boiling — the cauliflower. Roasting eliminates excess water, brings the natural sugars to the fore, and concentrates the flavours (adding some nuttiness in the process). You may notice that there’s no dairy in this recipe. READ MORE: 4 easy ways to cut carbs with cauliflower Similarly, there’s no flour or cornstarch here.

The right tool for pureeing a soup is a blender. At the end of the recipe, to provide some crunchy contrast to the creamy base, I added roasted cauliflower florets. Embrace the Savory Side With This Japanese Squash Soup. A creamy, savory, dairy-free squash soup. 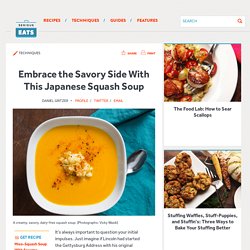 [Photographs: Vicky Wasik] It's always important to question your initial impulses. Just imagine if Lincoln had started the Gettysburg Address with his original text, which is believed to have been "These past 87 years have been one hell of a slow-motion train wreck, amiright? " Or if Martin Luther King had gone with the first draft of his March on Washington speech, tentatively titled I Slept Poorly Last Night. And think of the mess scientists would still be cleaning up today if Heisenberg had published his Absolutely-Damned-Certain Principle. 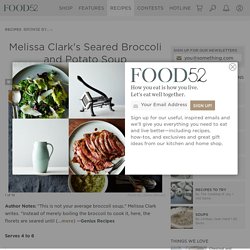 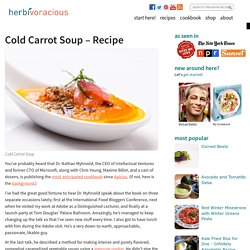 Ditch the dairy to make this creamy roasted cauliflower soup. I-Can't-Believe-It's-Not-Dairy Pumpkin Bisque. Sweet Potato Soup with Miso and Ginger — Weeknight Dinner Recipes from The Kitchn. Creamy sweet potatoes, spicy ginger, and sweet and salty miso all meet in this easy, delicious soup that my family has been enjoying the last few days. 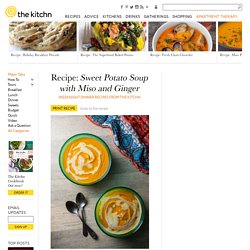 When I first served it, my husband had a hard time pinning down the flavors — we both thought it tasted fruity, although I knew there was no apple or orange in the recipe. It's thick, creamy, bright, and an excellent use for leftover sweet potatoes. A yogurt drizzle adds a tangy touch and more warming spice. This soup makes an easy weeknight meal all on its own, especially if you already have a few leftover roasted sweet potatoes in the fridge. Luxurious 7-Vegetable and “Cheese” Soup. Grocery shopping while hungry – oh boy. It seems to happen all too often, despite my best intentions.

Sometimes, simply being in the proximity of tasty looking food makes me hungry. Ok, make that always. Quick Miso Soup Recipe. A Seasonal Cook in Turkey: Tarhana Çorbası/Tarhana Soup. Once upon a time many centuries ago, there was a Sultan who was a guest at a poor peasant’s house. There was no food to offer him as such and this was the only dish the poor peasant wife could quickly prepare. She said this is ‘dar hane’ soup, meaning this is the soup of a ‘poor house’ and thus over time the word evolved into tarhana. Tarhana is in fact the first instant soup ever and was invented by the Central Asian Turks many moons ago; over time it spread to the neighbouring Balkans.

When you next go to the market, look out for containers or sacks of these rather nondescript-looking powdery granules. Binnur's Turkish Cookbook: Tarhana Soup. (Tarhana Corbasi) 2-3 tablespoonful tarhana dough (see below)1/2 cup water2 tbsp crushed tomato2-3 cup chicken stockCrushed red pepper, optional1 tsp butter Garnish:Crumbled feta cheese Place the tarhana and 1/2 cup water in a pot. Leave it alone for 1-2 hours for tarhana to dissolve a bit. Then add in the rest of the ingredients.

Place the soup into a bowl, sprinkle some crumbled feta cheese on top and serve while still warm. Tarhana Soup Recipe.