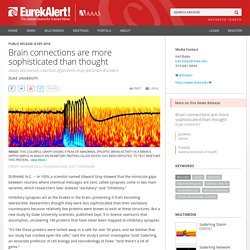 " Inhibitory synapses act as the brakes in the brain, preventing it from becoming overexcited. Researchers thought they were less sophisticated than their excitatory counterparts because relatively few proteins were known to exist at these structures. But a new study by Duke University scientists, published Sept. 9 in Science, overturns that assumption, uncovering 140 proteins that have never been mapped to inhibitory synapses. "It's like these proteins were locked away in a safe for over 50 years, and we believe that our study has cracked open the safe," said the study's senior investigator Scott Soderling, an associate professor of cell biology and neurobiology at Duke. "And there's a lot of gems. " Disclaimer: AAAS and EurekAlert! The Real Origins of the Religious Right. One of the most durable myths in recent history is that the religious right, the coalition of conservative evangelicals and fundamentalists, emerged as a political movement in response to the U.S. 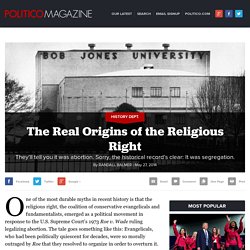 Supreme Court’s 1973 Roe v. Wade ruling legalizing abortion. The tale goes something like this: Evangelicals, who had been politically quiescent for decades, were so morally outraged by Roe that they resolved to organize in order to overturn it. This myth of origins is oft repeated by the movement’s leaders. In his 2005 book, Jerry Falwell, the firebrand fundamentalist preacher, recounts his distress upon reading about the ruling in the Jan. 23, 1973, edition of the Lynchburg News: “I sat there staring at the Roe v. Story Continued Below Some of these anti- Roe crusaders even went so far as to call themselves “new abolitionists,” invoking their antebellum predecessors who had fought to eradicate slavery. 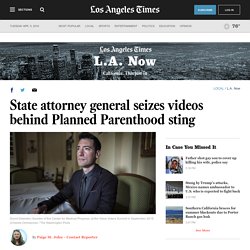 Gen. Kamala Harris' office searched the apartment of David Daleiden, the antiabortion activist whose controversial hidden camera videos last summer accused Planned Parenthood doctors of selling fetal tissue. The Tuesday afternoon search was announced by Daleiden's Center for Medical Progress, which posted a protest on its Facebook page. The organization said Harris' officers seized video files from Daleiden's apartment as well as personal information. In the post, Daleiden said his "First Amendment work product" was taken, a reference to his claim that he and his work are protected as an "undercover journalist. " See more of our top stories on Facebook >> Daleiden characterized Tuesday's search as "an attack on citizen journalism. " "This is no surprise -- Planned Parenthood's bought-and-paid-for AG has steadfastly refused to enforce the laws against the baby body parts traffickers in our state, or even investigate them," he said.

Defund Planned Parenthood and This Happens. At a Republican debate in September, former Florida governor Jeb Bush argued that excluding Planned Parenthood from federal programs like Medicaid wouldn't affect women at all because they have lots of other places to get low-cost reproductive care that don't also provide abortions. 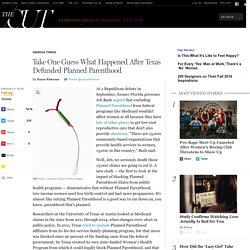 "There are 13,000 community-based organizations that provide health services to women, 13,000 in this country," Bush said. Well, Jeb, we seriously doubt those 13,000 clinics are going to cut it. A new study — the first to look at the impact of blocking Planned Parenthood clinics from public health programs — demonstrates that without Planned Parenthood, low-income women used less birth control and had more pregnancies. It's almost like cutting Planned Parenthood is a good way to cut down on, you know, parenthood that's planned. Researchers at the University of Texas at Austin looked at Medicaid claims in the state from 2011 through 2014, when changes were afoot in public policy. 2 Abortion Foes Behind Planned Parenthood Videos Are Indicted. HOUSTON — A county grand jury here that was investigating allegations of misconduct against has instead indicted two anti- activists who made videos of the organization. 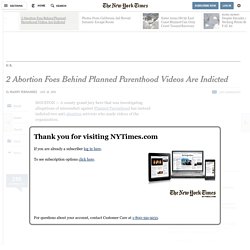 The Center for Medical Progress had covertly shot videos of Planned Parenthood officials discussing the provision of body parts from aborted fetuses for research. Mr. Daleiden, 26, had posed as a biotechnology representative to infiltrate Planned Parenthood affiliates and surreptitiously record his attempts to procure tissue for research.

Ms. The case started in August, when Lt. In a statement at the time, Mr. Ms.