Video for a lesson, not only TED

Making sense of irrational numbers - Ganesh Pai. How you can be good at math, and other surprising facts about learning. The infinite life of pi - Reynaldo Lopes. Symmetry, reality's riddle - Marcus du Sautoy. Marcus du Sautoy and some colleagues at Oxford developed the “Maths in the City” web site to reveal the mathematics embedded in urban environments. 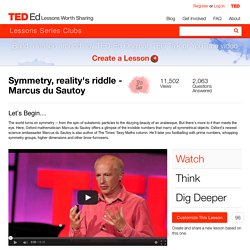 Visit the Maths in the City site at to sample some of the mathematical wonders in the cities of Europe, Australia, the Middle East, Asia, and America. Add an entry spotlighting the math in your own city. Da Vinci's Vitruvian Man of math - James Earle. Questions no one knows the answers to (Full Version) - Chris Anderson. Ed and Periodic Videos. Ed and Periodic Videos. Da Vinci's Vitruvian Man of math - James Earle. Pico della Mirandola’s Oration on the Dignity of Man Numberphile did a great explanation of “Squaring the Circle” See James Earle's other Lesson. 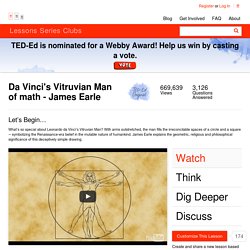 After Rome was destroyed, people were wary of attachment to physical beauty. As Christianity gained traction, Romans instead began to focus on the metaphysical beauty of virtue, and art began to follow suit. What can Schrödinger's cat teach us about quantum mechanics? - Josh Samani. Quantum entanglement was first studied in 1935, in a famous paper by Albert Einstein, Boris Podolsky, and Nathan Rosen. These scientists collectively have come to be known as EPR, an acronym that derives from the first letter of each of their last names.In their paper, the authors considered a certain instance of entanglement that has since come to be known as the EPR paradox or the EPR experiment. The purpose of their paper was to use the paradox to demonstrate that quantum mechanics could not provide a complete description of reality.

The term “entanglement” was not coined by EPR.Instead, it was first used by Erwin Schrodinger, one of the fathers of quantum mechanics, in a letter to Albert Einstein discussing the EPR experiment. In a paper following the original paper by EPR, Schrodinger stressed that entanglement is a key property of quantum physics that distinguishes it from the “classical” physics that came before it. 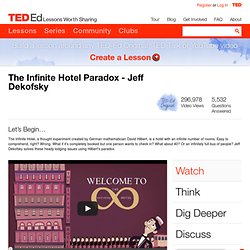 Here are a few of their specific videos dealing with infinity, prime numbers, etc In addition to online resources, there are also some outstanding books dealing with the concept of infinity. The Infinite Book: A Short Guide to the Boundless, Timeless and Endless by John Barrow. How do you know you exist? - James Zucker. René Descartes believed that most of what he acquired and learned came from the senses, but his senses had deceived him in the past.

Can you give an example of when your senses have deceived you? Is there an experience that has made you doubt what you have seen or heard? Could this give you reason to doubt EVERYTHING you have learned from your senses? Check out this video for some background on this idea or watch the TED-Ed Lesson How Optical Illusions Trick Your Brain for one example of how and why your mind can be tricked into seeing something differently than it is. Would René Descartes agree with the statement that “things are not always what they seem? " Descartes believed that if you doubt your own existence, you must exist to doubt it! What's the difference between accuracy and precision? - Matt Anticole. Scientists (and engineers) are used to taking measurements and working with numerical data. 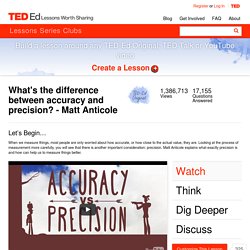 With numerical data, we can try to identify patterns hidden in nature. With those patterns, we can begin to understand, predict, and perhaps ultimately control the world that surrounds us. Because data is so important to scientists and engineers, sometimes they need to worry about more than just whether they are right or wrong. They have developed what seems like a secret language to help them describe their measurements in more detail. What is the difference between a Number and a Measurement? Taking a measurement requires you to use a measuring tool of some sort: a ruler, a thermometer, a graduated cylinder, etc.

What is accuracy? What can change the accuracy of a measurement? While accuracy is easy enough to understand, it does have an underlying weakness. Why do honeybees love hexagons? - Zack Patterson and Andy Peterson. Mile of Pi - Numberphile. How do tornadoes form? - James Spann. The National Oceanic and Atmospheric Administration (NOAA) has an awesome review of many different types of severe weather from its National Severe Storms Laboratory. 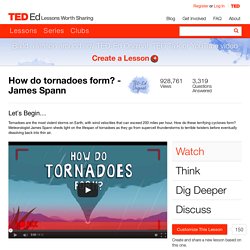 Visit the site and learn more about all the types of extreme weather and more about tornadoes. Is math discovered or invented? - Jeff Dekofsky. The complex geometry of Islamic design - Eric Broug. If The World Were 100 People. A performance of "Mathemagic" - Arthur Benjamin. Math is important to every human that has ever walked the face of the planet (and to every human that ever will). 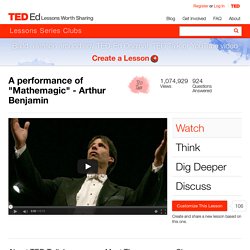 It's all around us. It's everywhere. Watch these TED Talks to learn how math is not only magical, but incredibly necessary: Numb3rs: probabilità condizionata e Problema di Monty Hall. Transcendental Numbers - Numberphile.