Year in Space: 2016. Multilingual Universe from 'Mitaka' The door to the digital Universe has been flung open! 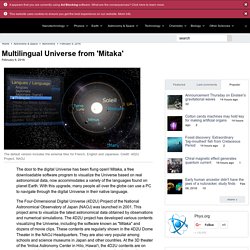 Mitaka, a free downloadable software program to visualize the Universe based on real astronomical data, now accommodates a variety of the languages found on planet Earth. Latest Astrobiology Magazine Topics. University of Buckingham. Is this picture a ‘seed’ sent to Earth by aliens? 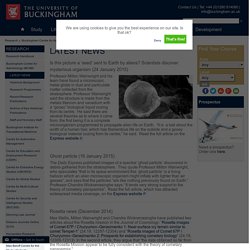 Scientists discover mysterious organism (24 January 2015) Professor Milton Wainwright and his team have found a microscopic metal globe in dust and particulate matter collected from the stratosphere. Professor Wainwright said the structure is made from the metals titanium and vanadium with a “gooey” biological liquid oozing from its centre. He said there are several theories as to where it came from, the first being it is a complete microorganism programmed to propagate alien life on Earth. UK Scientists: Aliens May Have Sent Space Seeds To Create Life On Earth. Scientists in the U.K. have examined a tiny metal circular object, and are suggesting it might be a micro-organism deliberately sent by extraterrestrials to create life on Earth. 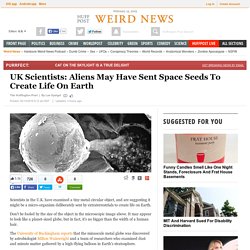 Timelapse video captures incredible moment ISS flies through Northern Lights [Video] Part of Alexander Gerst’s timelapse video from the International Space Station that is making the rounds was shot when the ISS was flying through an aurora, the astronaut said. 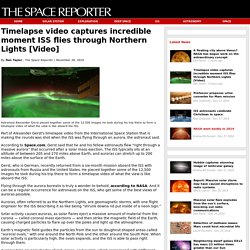 According to Space.com, Gerst said that he and his fellow astronauts flew “right through a massive aurora” that occurred after a solar mass ejection. The ISS typically sits at an altitude of between 205 and 270 miles above Earth, and auroras can stretch up to 200 miles above the surface of the Earth. Magnetic fields frozen into meteorite grains tell shocking tale of solar system birth. The most accurate laboratory measurements yet made of magnetic fields trapped in grains within a primitive meteorite are providing important clues to how the early solar system evolved. 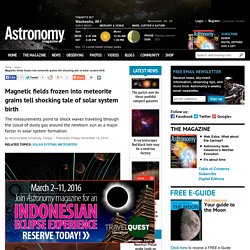 The measurements point to shock waves traveling through the cloud of dusty gas around the newborn Sun as a major factor in solar system formation. “The measurements made by Roger Fu of MIT and Benjamin Weiss, also of MIT, are astounding and unprecedented,” said Steve Desch of Arizona State University. “Not only have they measured tiny magnetic fields thousands of times weaker than a compass feels, they have mapped the magnetic fields’ variation recorded by the meteorite, millimeter by millimeter.” Construction debris It may seem all but impossible to determine how the solar system formed, given it happened about 4.5 billion years ago. But making the solar system was a messy process, leaving lots of construction debris behind for scientists to study. Constellations of Words. Stellarium. NASA Hack Space. Great Moonbuggy Race Winners NASA today declared the winners of the first NASA Human Exploration Rover Challenge, held April 11-12 at the U.S. 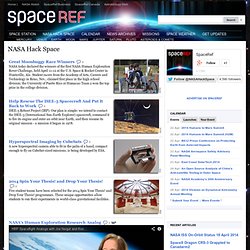 Space & Rocket Center in Huntsville, Ala. Student racers from the Academy of Arts, Careers and Technology in Reno, Nev., claimed first place in the high school division; the University of Puerto Rico at Humacao Team 2 won the top prize in the college division. Help Rescue The ISEE-3 Spacecraft And Put It Back to Work ISEE-3 Reboot Project (IRP): Our plan is simple: we intend to contact the ISEE-3 (International Sun-Earth Explorer) spacecraft, command it to fire its engine and enter an orbit near Earth, and then resume its original mission - a mission it began in 1978. Hyperspectral Imaging by CubeSats A new hyperspectral camera able to fit in the palm of a hand, compact enough to fly on CubeSat-sized missions, is being developed by ESA. 2014 Spin Your Thesis! 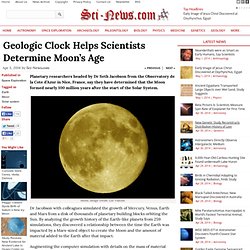 Moon. Image credit: Luc Viatour. Pleiades. Observational history[edit] The Pleiades are a prominent sight in winter in both the Northern Hemisphere and Southern Hemisphere, and have been known since antiquity to cultures all around the world, including the Māori, Aboriginal Australians, the Persians, the Arabs (known as Thurayya), the Chinese, the Japanese, the Maya, the Aztec, and the Sioux and Cherokee. 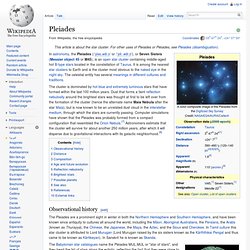 In Tamil culture this star cluster is attributed to Lord Murugan (Lord Murugan raised by the six sisters known as the Kārththikai Pengal and thus came to be known as Kārtikeyan). In Sanskrit he is known as Skanda. The Nebra sky disk, dated c. 1600 BC. Suspicious0bservers.

Outer space physics. Is the Universe a Holographic Reality? Did Comet ISON survive? Scientists see tiny hope (Update) A comet that gained an earthly following because of its bright tail visible from space was initially declared dead after grazing the sun. 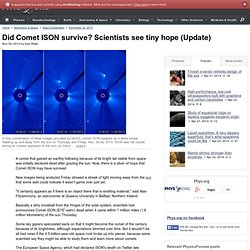 Now, there is a sliver of hope that Comet ISON may have survived. New images being analyzed Friday showed a streak of light moving away from the sun that some said could indicate it wasn't game over just yet. "It certainly appears as if there is an object there that is emitting material," said Alan Fitzsimmons, an astronomer at Queens University in Belfast, Northern Ireland.