How to suppress votes and gerrymander people 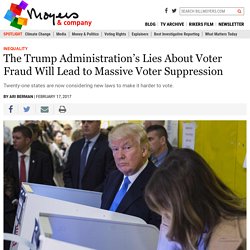 Then-Republican presidential nominee Donald Trump and his wife, Melania, fill out their ballots at a polling station in a school during the 2016 presidential elections on Nov. 8, 2016 in New York. (Photo by Mandel Ngan/AFP/Getty Images) This post originally appeared at The Nation. After falsely alleging that 3 million to 5 million people voted illegally in 2016, Donald Trump debuted a new lie about voter fraud in a meeting with senators on February 10, saying, according to Politico, that “thousands” of people were “brought in on buses” from Massachusetts to “illegally” vote in New Hampshire. Trump claimed that’s why he and former GOP Sen. White House senior adviser Stephen Miller repeated Trump’s latest lie in an interview with ABC’s This Week on Sunday.

“For the record, you have provided absolutely no evidence,” Stephanopoulos responded. Miller could provide no evidence for Trump’s claim because there is none. This is the best explanation of gerrymandering you will ever see. Gerrymandering -- drawing political boundaries to give your party a numeric advantage over an opposing party -- is a difficult process to explain. 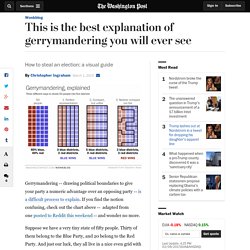 If you find the notion confusing, check out the chart above -- adapted from one posted to Reddit this weekend -- and wonder no more. Suppose we have a very tiny state of fifty people. Facing Lawsuits, North Carolina Relaxes Voter ID Rule. When the Supreme Court gutted the Voting Rights Act of 1965, states that were covered under the sections in the act that the Court ruled unconstitutional rushed to implement many voter suppression laws that were previously not allowed. 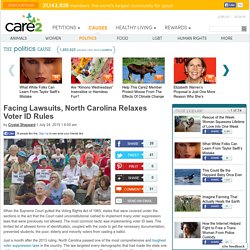 The most common tactic was implementing voter ID laws. The limited list of allowed forms of identification, coupled with the costs to get the necessary documentation, prevented students, the poor, elderly and minority voters from casting a ballot. Just a month after the 2013 ruling, North Carolina passed one of the most comprehensive and toughest voter suppression laws in the country. The law targeted every demographic that had made the state one of the most progressive in the nation. At the time of passage, Republicans held all branches of government for the first time since reconstruction and were determined to reverse any progress made since then.

Only 40 of the 100 counties in North Carolina were covered under section 4 of the VRA. For Voters, Facts Should Be the Lifeblood of Democracy - BillMoyers.com. Rick Shenkman is an award-winning investigative reporter for The New York Times. 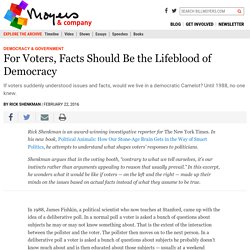 In his new book, Political Animals: How Our Stone-Age Brain Gets in the Way of Smart Politics, he attempts to understand what shapes voters’ responses to politicians. Shenkman argues that in the voting booth, “contrary to what we tell ourselves, it’s our instincts rather than arguments appealing to reason that usually prevail.” In this excerpt, he wonders what it would be like if voters — on the left and the right — made up their minds on the issues based on actual facts instead of what they assume to be true.

In 1988, James Fishkin, a political scientist who now teaches at Stanford, came up with the idea of a deliberative poll. In a normal poll a voter is asked a bunch of questions about subjects he may or may not know something about. James Fishkin has run his conferences around the world. That, at any rate, is what seems to be the lesson of Fishkin’s confer­ences. We think we have an ignorance problem. This is actually what America would look like without gerrymandering. The GOP scored 33 more seats in the House this election even though Democrats earned a million more votes in House races. 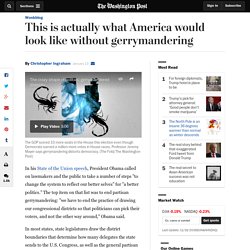 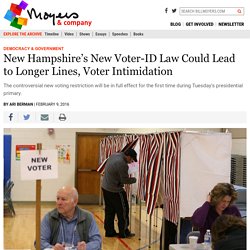 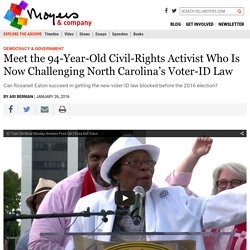 This post originally appeared at The Nation. This week, a federal court will hear a challenge to North Carolina’s voter-ID law. Ninety-four-year-old Rosanell Eaton will be a key witness against the law. In 1942, the 21-year-old Eaton took a two-hour mule ride to the Franklin County courthouse in eastern North Carolina to register to vote. The three white male registrars told her to stand up straight, with her arms at her side, look straight ahead and recite the preamble to the Constitution from memory. A granddaughter of a slave, she became a lifelong voting-rights activist, personally registering 4,000 new voters before losing count. Beginning in January 2015, Eaton undertook a herculean effort to match her various documents and comply with the law.

Not everyone will have Eaton’s persistence, resources, and stamina to comply with the law.