This is the best explanation of gerrymandering you will ever see 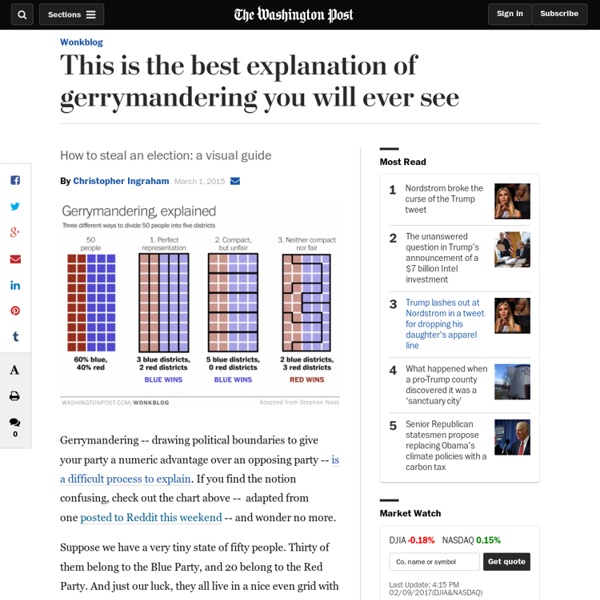 Gerrymandering -- drawing political boundaries to give your party a numeric advantage over an opposing party -- is a difficult process to explain. If you find the notion confusing, check out the chart above -- adapted from one posted to Reddit this weekend -- and wonder no more. Suppose we have a very tiny state of fifty people. Now, let's say we need to divide this state into five districts. Fortunately, because our citizens live in a neatly ordered grid, it's easy to draw five lengthy districts -- two for the Reds , and three for the Blues. Now, let's say instead that the Blue Party controls the state government, and they get to decide how the lines are drawn. With a comfortable Blue majority in this state, each district elects a blue candidate to the House. In the real world, the results of this latter scenario are similar to what we see in New York, though there are no good examples of where a majority party gives itself a clean-sweep. Please provide a valid email address. Related:  Politics • Scienze sociali • VOTE • Gerrymandering

Reviving the Working Class Without Building Walls Photo Can the government help ’s supporters? The political system is in shock over the insurrection of the white working class, which has flocked to Mr. Trump’s candidacy. On the wrong side of globalization and technological change, no longer at home in an increasingly multiethnic America, these voters have eagerly embraced his simple proposal to make things better: walls against the imports and the people they believe have robbed them of a shot at prosperity. That strategy, if it amounts to that, would visit a disaster of epic proportions upon the world economy. As Lawrence H. But the raw anxiety of his supporters remains unaddressed. It is not obvious how to restore the America Mr. Their economic discontent — born of the mismatch between expectations based on an earlier America, where plenty of blue-collar jobs offered a decent standard of living, and the more cutthroat reality they face today — can seem intractable, too. These proposals represent only a start.

This computer programmer solved gerrymandering in his spare time Yesterday, I asked readers how they felt about setting up independent commissions to handle redistricting in each state. Commenter Mitch Beales wrote: "It seems to me that an 'independent panel' is about as likely as politicians redistricting themselves out of office. This is the twenty-first century. How hard can it be to create an algorithm to draw legislative districts after each census?" Reader "BobMunck" agreed: "Why do people need to be involved in mapping the districts?" They're right. You can see for yourself how his boundaries look. Here's Maryland, currently the least-compact state in the nation: And here's North Carolina, the second-least compact: Huge differences, yes? Now, some argue that compactness isn't a very good measure of district quality. And therein lies the problem: You can define a "community of interest" pretty much however you want. Wonkbook newsletter Your daily policy cheat sheet from Wonkblog. Please provide a valid email address.

From Ronald Reagan to Donald Trump: Watch how the Republican Party has shifted on immigration | US elections Donald Trump has gone from reality television star to frontrunner for the Republican presidential nomination because of one issue – immigration. His campaign has been defined by incendiary anti-immigration rhetoric and it has found support across America with Trump securing 46% of the delegates that have been on offer so far. The billionaire has publicly targeted Mexicans and Muslims; and while today might be a different world, the GOP stance on immigration has not always been as extreme. 36 years ago during a primary debate between then-Republican presidential candidates Ronald Reagan and George H.W. Bush in Houston, both championed immigrants living in the United States when faced with the question: “Do you think the children of illegal aliens should be allowed to attend Texas public schools for free, or do you think their parents should pay for their education?” “The answer to your question is much more fundamental than whether they attend Houston schools, it seems to me. Loaded: 0%

Henry A. Giroux | Beyond Orwellian Nightmares and Neoliberal Authoritarianism (Image: Jared Rodriguez / Truthout)Those who fight against neoliberalism must not settle for reforming a system that is as broken as it is dangerous. Any viable, transformative struggle will need a boldly democratic vision; durable, longstanding organizations and strategies that make politics meaningful. To be corrupted by totalitarianism, one does not have to live in a totalitarian country.- George Orwell Central to George Orwell's nightmarish vision of a totalitarian society was a government so powerful that it not only dominated all of the major institutions in a society, but it also was quite adept at making invisible its inner workings of power. To read more articles by Henry A. The American Deep State, or what Colonel Fletcher Prouty called the Secret Team, is a structural layer of political intermediaries: non-governmental organizations (e.g. In addition, the left has to do more than chart out the mechanisms through which neoliberal authoritarianism sustains itself.

The Electoral College Was Meant to Stop Men Like Trump From Being President Americans talk about democracy like it’s sacred. In public discourse, the more democratic American government is, the better. The people are supposed to rule. But that’s not the premise that underlies America’s political system. Most of the men who founded the United States feared unfettered majority rule. The framers constructed a system that had democratic features. The Bill of Rights is undemocratic. That’s the way the framers wanted it. Donald Trump was not elected on November 8. The Constitution says nothing about the people as a whole electing the president. This ambiguity about how to choose the electors was the result of a compromise. It is “desirable,” Alexander Hamilton wrote in Federalist 68, “that the sense of the people should operate in the choice of” president. As Michael Signer explains, the framers were particularly afraid of the people choosing a demagogue. In truth, Americans are wedded less to democracy than to familiarity. This makes sense. Related Videos

Voters Not Politicians 'The country isn’t the earth beneath our feet, it’s the people' Similarly, I have vowed not to drink the raw alcohol of a passing enthusiasm to join patriotic acts in a frenzy. I would tolerate poor work rather than beat up the servants – the prospect of saying or doing something in a fit of anger makes both my mind and body shrink. I know Bimla is contemptuous of this disinclination – she considers it a form of mildness; she is angry with me today for the same reason, for she sees me refusing to do as I please with the war cry of “Vande Mataram” on my lips. That I have not joined in the worship of the goddess nation with a glass of alcohol in my hand has angered everyone. For I say that those who do not feel motivated to serve their country when they think of their nation as nothing but their nation and respect people as nothing but people, who need to be hypnotised with shrieking invocations to a mother or a deity, do not love their country so much as they love passion. We no longer feel strong once we set our mind free.

Swarmwise – The Tactical Manual To Changing The World. Chapter Two. Launching a swarm is an intense event, where you can get hundreds or thousands of new colleagues in less than a day. You have a very short window for appreciating their interest, or they will take it elsewhere. OK, so you have a provocative idea. You’ve done the math. A traditional method would be to go about an advertising campaign to generate interest. On the other hand, a swarm will form as long as you present a compelling enough idea that people feel that they can be part of. To traditional marketers, this sounds ridiculous. When I started the Pirate Party in Sweden, I took its website online and wrote two lines in a file-sharing hub’s lobby chat. Hey, look, the Pirate Party has its website up after New Year’s. The site had a manifesto which was rough and unpolished, but which came across as credible, tangible, inclusive, and world changing. The first website of the Pirate Party, translated for reference. And that’s it. Don’t worry about advertising.