This fearless Mexican American reporter fought racism and sexism to keep power in check. Hawaii's Last Queen (documentary excerpt) The 1897 Petition Against the Annexation of Hawaii. Attempted Overthrow of the Hawaiian Kingdom,1893. The Overthrow of the Monarchy. Return to the Hawaiian Independence Home Page or the View this article text only, or just the images with captions By Pat Pitzer''Spirit of Aloha,'' May 1994(The in-flight magazine of Aloha Airlines) The statue of Queen Lili`uokalani, which stands between `Iolani Palace and the State Capitol, was draped with leis for last year's centennial observance of the overthrow of the Hawaiian monarchy. 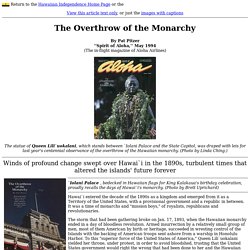 (Photo by Linda Ching.) Winds of profound change swept over Hawai`i in the 1890s, turbulent times that altered the islands' future forever `Iolani Palace , bedecked in Hawaiian flags for King Kalakaua's birthday celebration, proudly recalls the days of Hawai`i's monarchy. Hawai`i entered the decade of the 1890s as a kingdom and emerged from it as a Territory of the United States, with a provisional government and a republic in between. The storm that had been gathering broke on Jan. 17, 1893, when the Hawaiian monarchy ended in a day of bloodless revolution. They also had luck. Life, death and politics in Hawaii: 125 years of colonial rule. The effects of a political overthrow that happened 125 years ago in Hawaii could not have been felt more vividly this month. 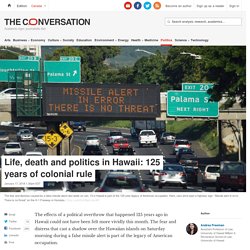 The fear and distress that cast a shadow over the Hawaiian islands on Saturday morning during a false missile alert is part of the legacy of American occupation. No one should have received that abrupt notice that their lives would end in roughly 12 minutes, the time it takes a missile to travel from North Korea to the islands. Least of all the people whose land, food, culture, and traditions have been under siege for a century and a quarter. Since moving to Honolulu five years ago to begin a position as a professor at the University of Hawaii law school, I have felt ambivalent at best about my place here.

Outsiders meet this ambivalence with disbelief. In 1893, American businessmen overthrew the Hawaiian monarchy to avoid taxes on their sugar imports to the United States. Their efforts did not succeed. A loud alarm I thought it would have an enclosed, safe room. Hawaiian Monarchy Overthrown by America-Backed Businessmen. Queen Liliuokalani, the last monarch of the Kingdom of Hawaii, is shown in this uncredited portrait taken around 1890. 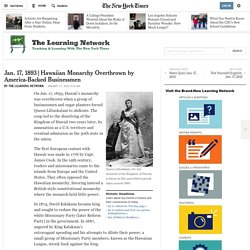 On Jan. 17, 1893, Hawaii’s monarchy was overthrown when a group of businessmen and sugar planters forced Queen Liliuokalani to abdicate. The coup led to the dissolving of the Kingdom of Hawaii two years later, its annexation as a U.S. territory and eventual admission as the 50th state in the union. The first European contact with Hawaii was made in 1778 by Capt. James Cook. In the 19th century, traders and missionaries came to the islands from Europe and the United States. In 1874, David Kalakaua became king and sought to reduce the power of the white Missionary Party (later Reform Party) in the government. King Kalakaua died in 1891 and was succeeded by his sister, Liliuokalani, who proposed a new constitution that would restore powers of the monarchy and extend voting rights for native Hawaiians.

Americans overthrow Hawaiian monarchy - Jan 17, 1893. Also on this day Lead Story On this day in 1950, 11 men steal more than $2 million from the Brinks Armored Car depot in Boston, Massachusetts. 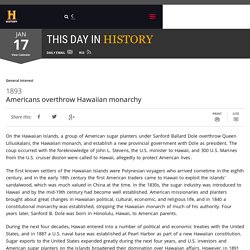 It was the perfect crime–almost–as the culprits weren’t caught until January 1956, just days before the statute of limitations for the theft expired. The robbery’s mastermind was Anthony “Fats” Pino,... American Revolution Relying upon strategic creativity, Brigadier General Daniel Morgan and a mixed Patriot force rout British Lieutenant Colonel Banastre Tarleton and a group of Redcoats and Loyalists at the Battle of Cowpens on this day in 1781. Automotive On this day in 1953, a prototype Chevrolet Corvette sports car makes its debut at General Motors’ (GM) Motorama auto show at the Waldorf-Astoria Hotel in New York City.