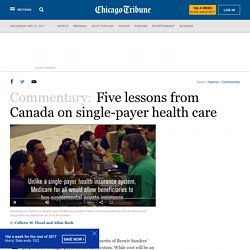 While cost will be an issue, evidence shows that many countries provide access to quality care for all their citizens through a single-payer model while spending far less than the U.S. does now. How can this be? Single-payer systems are often promoted as a means to achieve social justice. But they are also more economically efficient than the private market alternative. Having one payer simplifies the administration of health care by avoiding multiple insurers processing claims.

Costly administration is one reason why the U.S. spends by far the greatest percentage of gross domestic product on health care in the Organization for Economic Co-operation and Development (while having the largest percentage of uninsured). But not all single-payer models are created equal. We offer five lessons from Canada that Americans should take to heart. Canada’s Secret to Resisting the West’s Populist Wave - The New York Times.

American conservatives love to bash Canadian health care — but U.S. corporations love it. Is the American dream now the Canadian dream? The American Dream has moved to Canada. From the very moment of its creation, Americans have always imagined their country to be a beacon of opportunity for the world. 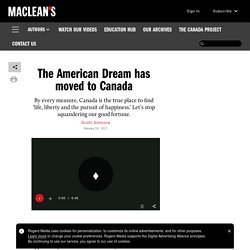 Thomas Jefferson lit that torch when he wrote in the Declaration of Independence that all men have the right to “life, liberty, and the pursuit of happiness”. This notion that everyone deserves a chance, and will most likely find it in America, has been arguably one of the most attractive and powerful ideas in modern history, guiding millions to Ellis Island, in search of a good job, a good education, a white picket fence and a two car garage.

But where once America stood alone as the land of opportunity, there are now dozens of other countries that have surpassed the United States; chief among these is its unassuming northern neighbour, Canada. Where do you go now for “Life, liberty, and the pursuit of happiness”? Canadians live 2.5 years longer than Americans. MORE: On CNN with Fareed Zakaria, Scott Gilmore discusses how the American dream has moved to Canada. Welcome signs in French, English, Arabic pop up in Ontario - Kitchener-Waterloo. Log In - New York Times. President Barack Obama admitted 12,000 Syrian refugees, triggering a furor and a backlash. 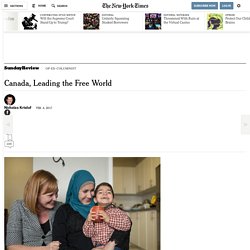 Meanwhile, Canada, with a far smaller population, has admitted 40,000 Syrians. Ahmed Hussen, Canada’s immigration minister, told me that one of the criticisms he faces from ordinary Canadians is that he’s not bringing in enough Syrians. And Hussen is himself an emblem of the country’s openness: He arrived at age 16 as a refugee from Somalia and now runs the ministry that once served him.

“We want people to join the Canadian family,” he said, noting that the country is trying to figure out how to keep more foreign students from leaving after graduation. The Canada experiment: is this the world's first 'postnational' country? As 2017 begins, Canada may be the last immigrant nation left standing. 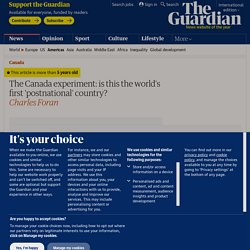 Our government believes in the value of immigration, as does the majority of the population. We took in an estimated 300,000 newcomers in 2016, including 48,000 refugees, and we want them to become citizens; around 85% of permanent residents eventually do. Recently there have been concerns about bringing in single Arab men, but otherwise Canada welcomes people from all faiths and corners. The greater Toronto area is now the most diverse city on the planet, with half its residents born outside the country; Vancouver, Calgary, Ottawa and Montreal aren’t far behind.

Annual immigration accounts for roughly 1% of the country’s current population of 36 million. Canada has been over-praised lately for, in effect, going about our business as usual. Compared to such hard stances, Canada’s almost cheerful commitment to inclusion might at first appear almost naive. Uk.businessinsider. Canadian Prime Minister Justin Trudeau.Blair Gable/Reuters If the race between Hillary Clinton and Donald Trump has you feeling disillusioned with American democracy, you may find yourself imagining a move to Canada. 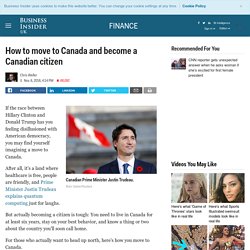 After all, it's a land where healthcare is free, people are friendly, and Prime Minister Justin Trudeau explains quantum computing just for laughs. But actually becoming a citizen is tough: You need to live in Canada for at least six years, stay on your best behavior, and know a thing or two about the country you'll soon call home. For those who actually want to head up north, here's how you move to Canada. Preface: Make sure you're not already a Canadian citizen. Canada in the Age of Donald Trump. It is early November and in the streets of Toronto, men and women are pinning bright red poppies onto their dark winter coats. 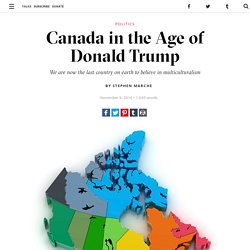