The life of an Il Torobo hunter-gatherer. Schooling the World (2010) If you wanted to change an ancient culture in a generation, how would you do it? 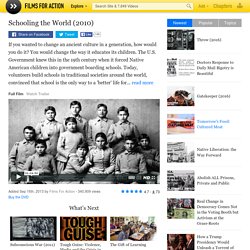 You would change the way it educates its children. The U.S. Government knew this in the 19th century when it forced Native American children into government boarding schools. Utopia. Epic in its production, scope and revelations, Utopia represents a long journey through the ‘secret country’ of John Pilger’s homeland. 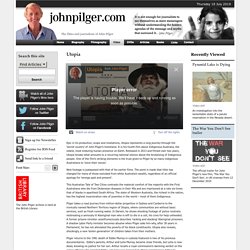 It is his fourth film about Indigenous Australia, the oldest, most enduring human presence on Earth. Released in 2013 and filmed over two years, Utopia breaks what amounts to a recurring national silence about the brutalising of Indigenous people. One of the film's striking elements is the trust given to Pilger by so many indigenous Australians to ‘voice their voices’. Taking indigenous world-views seriously: Juan Barletti at TEDxUniversityofStAndrews 2013. Wade Davis à propos de la toile mondiale des croyances et rituels. The Indigenous world view vs. Western world view. Our Generation - Full length version (2010, 73min) Ancient wisdom: why it still matters in a modern world - Big Ideas - ABC Radio National. Light at the Edge of the World: Science of the Mind. Wade Davis: Cultures at the far edge of the world. I'm part of the world's oldest living culture, but could I kill a zombie with a boomerang?

What the Aztecs can teach us about happiness and the good life. In the spring semester of the school year, I teach a class called ‘Happiness’. 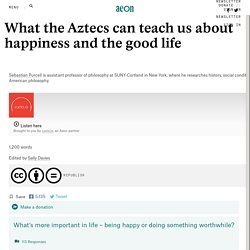 It’s always packed with students because, like most people, they want to learn the secret to feeling fulfilled. ‘How many of you want to be happy in life?’ I ask. Everyone raises a hand. Always. Then I lay out the evidence that having kids makes most people more miserable, and that their sense of wellbeing returns to its former levels only after the last child has left the house. Story Spheres - Uluru-Kata Tjuta National Park - Talinguru Nyakunytjaku.

Revolution and American Indians: “Marxism is as Alien to My Culture as Capitalism” By Russell Means / blackhawkproductions.com/ Nov 12, 2011 The following speech was given by Russell Means in July 1980, before several thousand people who had assembled from all over the world for the Black Hills International Survival Gathering, in the Black Hills of South Dakota. 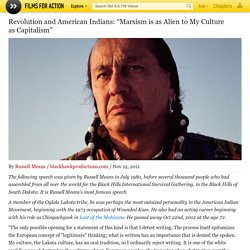 It is Russell Means's most famous speech. A member of the Oglala Lakota tribe, he was perhaps the most outsized personality in the American Indian Movement, beginning with the 1973 occupation of Wounded Knee. He also had an acting career beginning with his role as Chingachgook in Last of the Mohicans. He passed away Oct 22nd, 2012 at the age 72. ”Sameblod öppnar Pandoras ask” Nu är den äntligen här, den internationellt bejublade långfilmen Sameblod, där Amanda Kernell skickligt berättar ett levnadsöde från svenska Saepmie, från 1930-talet till nutid. 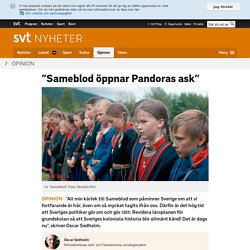 San Council Launches Code Of Ethics For Researchers. After more than a century of being questioned, photographed, measured and "sampled" by researchers from around the world, and having San indigenous knowledge pilfered for commercial gain, it was time to say, "enough", the council said, GroundUp reports. 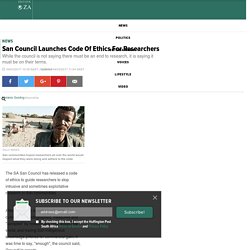 While the council is not saying there must be an end to research, it is saying it must be on their terms. The code of ethics was made public in Cape Town on Thursday, during a conference of TRUST, an international network set up in 2015 to ensure researchers adhere to high ethical standards. TRUST is funded by the European Union's Horizon 2020 Programme.

Future - The astonishing vision and focus of Namibia’s nomads. Nestled in a grassy valley of north-eastern Namibia, Opuwo may seem like a crumbling relic of colonial history. 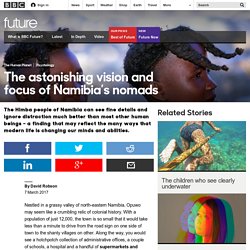 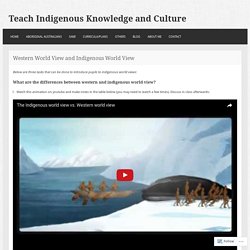 Watch this animation on youtube and make notes in the table below (you may need to watch a few times). Dreamtime Travelling through the Australian continent - documentary. The men of the Fifth World (full documentary) John Pilger - The Secret Country - The First Australians Fight Back [1985] Jennifer Lawrence, please keep your butt off our ancestors. How do you define “sacred?” 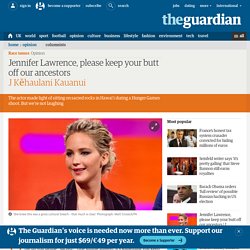 One simple answer: it’s something you keep your butt off. Jennifer Lawrence got that memo, but decided to disregard it. In a recent interview she recalls her “butt-scratchin’” on sacred rocks while shooting Hunger Games in Hawai’i. They were, to her mind, a useful tool to relieve her of itchiness. Environmental groups ask nations to give land to natives for protection. The world’s indigenous, or native, communities need to be given a bigger role in slowing climate change, according to a new study. 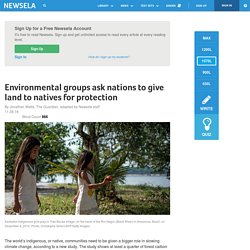 The study shows at least a quarter of forest carbon is stored on native land, particularly in Brazil. Forest carbon is the total reserve of carbon contained in forest ecosystems. Without protections, this carbon could be released into the atmosphere as carbon-dioxide, a greenhouse gas that contributes to climate change. The research was conducted by a group of academic institutions and environmental organizations. It is the most comprehensive effort yet to measure the contribution of traditional forest guardians in reducing carbon emissions. Authors say expanding tribal land rights is the most cost-effective way to protect forests and keep their carbon out of the atmosphere. COP22. 8 November 2016 à 2:55 COP22 participants danced to the rhythm of the opening ceremony of the Indigenous Peoples’ & Communities’ Pavilion: “Traditional Knowledge for Climate Action” that took place today in the Green Zone. The event featured lively music and dance from indigenous Moroccan Tamazight and Russian & Eastern European performers.

It was standing room only as Green Zone participants flocked to the pavilion to snap pictures and sway to the traditional tunes. The Green Zone at COP22 is the dedicated area for civil society and innovation activities, featuring over 500 side-events, pavilions, stands and activities. Also in attendance was Driss ElYazami, COP22 Head of Civil Society Activities. The Largest Native American Protest In HISTORY Is Happening Right Now And YOU Need To Know About It! – Indigenous Americans. Right now the largest Native American PROTECT (not PROTEST) in history is happening in the Dakota’s. What’s going on? Well, the US Government is taking control of Native American lands and forcing them to allow oil developers to drill on their land and move oil via pipelines.

From watching what happened with the Tar Sands of Canada, we can get a good glimpse at what the land will look like after they’re done with it. Running through a similar pathway as that of the well known failed Keystone XL project, the Bakken Pipeline would run across the Ogallala aquifer and the Mississippi rivers through sovereign Native lands. Alejandro Dávila Fragoso with Think Progress reports: A federal court said on Wednesday it will rule next month whether to temporarily halt construction of a controversial oil pipeline that has prompted large protests in North Dakota.

Image copyright AFP/Getty Images Taiwanese President Tsai Ing-wen has officially apologised to the island's indigenous population for centuries of mistreatment, the first time a leader has done so. Speaking to representatives from 16 recognised native tribes, she said Taiwan had to face "the truth" to move forward "as a country of one people". Ms Tsai said a historical justice commission would be established. Immigrants from mainland China arrived in Taiwan about 400 years ago. One woman's mission to photograph every Native American tribe in the US. Three years ago, Matika Wilbur sold almost everything she owned, left behind her apartment in Seattle, and set out on the open road.