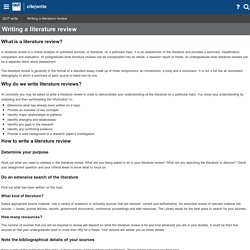 CAS Authentication wanted! Know Your Child Better By Learning The Ages & Stages Of Child Development. Children go through distinct periods of development as they move from infants to young adults. 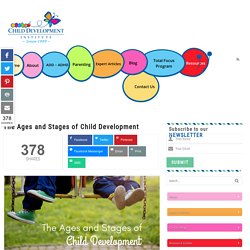 During each of these stages multiple changes in the development of the brain are taking place. What occurs and approximately when these developments take place are genetically determined. However, environmental circumstances and exchanges with key individuals within that environment have significant influence on how each child benefits from each developmental event. Ages and Stages is a term used to broadly outline key periods in the human development timeline. During each stage growth and development occur in the primary developmental domains including physical, intellectual, language and social – emotional. Infants/Babies (0 – 2 years) Raising a baby, especially for the first time, is both exciting and challenging. Toddlers/Preschoolers (2 – 5 years) When a child takes the first step on his or her own, a new phase in development begins. Child Development. American Psychological Association (APA) 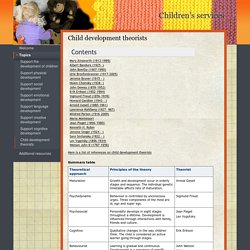 Ainsworth, through her research looking at the attachment process in both African and American cultures, identified the characteristics of a secure and insecure attachment between mother and baby. Erikson's Psychosocial Stages Summary Chart. Erik Erikson described development that occurs throughout the lifespan. 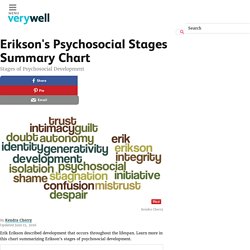 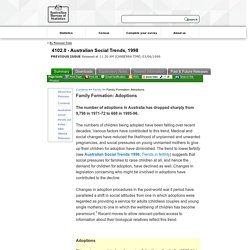 The numbers of children being adopted have been falling over recent decades. Various factors have contributed to this trend. Medical and social changes have reduced the likelihood of unplanned and unwanted pregnancies, and social pressures on young unmarried mothers to give up their children for adoption have diminished. The trend to lower fertility (see Australian Social Trends 1996, Trends in fertility) suggests that social pressures for families to raise children at all, and hence the demand for children for adoption, have declined as well. Trends in adoptionAustralia-wide statistics on the number of adoptions have been available since the year ended 30 June 1969. The major turnaround in the number of adoptions after 1972 occurred at a time of rapidly changing social attitudes surrounding the plight of young unmarried mothers. 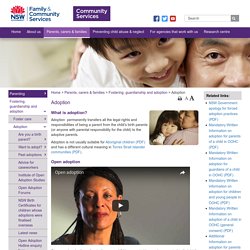 Adoption permanently transfers all the legal rights and responsibilities of being a parent from the child's birth parents (or anyone with parental responsibility for the child) to the adoptive parents. Adoption is not usually suitable for Aboriginal children and has a different cultural meaning in Torres Strait Islander communities. Open adoption Openness in adoption refers to the way a child is supported to remain connected to their birth family and cultural heritage. Open adoption recognises that children often benefit when both their families (birth and adoptive) remain in contact with each other after an adoption order has been made. 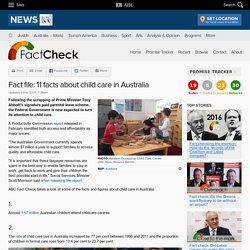 A Productivity Commission report released in February identified both access and affordability as major issues. "The Australian Government currently spends almost $7 billion a year to support families to access quality and affordable child care. "It is important that these taxpayer resources are spent in the best way to enable families to stay in work, get back to work and give their children the best possible start in life," Social Services Minister Scott Morrison said when releasing the report. 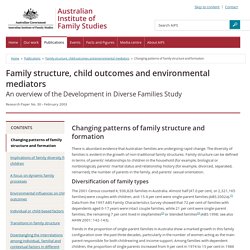