The Blue Men. Question: We find in a magazine that was in circulation in Distrito Federal (Mexico), the following narrative: “In 1960, based on the narratives of the Egyptian historian Maneton and of the Greek Herodotus, a Soviet scientific magazine discussed a race of blue humans, and also informed about the enigma of Atlantis and the arrival of extraterrestrial beings.” 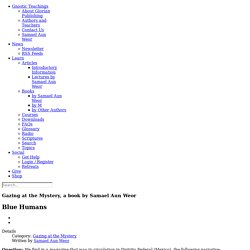 “The question they were asking themselves was the following: ‘Were the Atlanteans beings with a bluish skin color? Liber XV: The Gnostic Mass. The Gnostic Mass With Annotations and Commentary by Helena and Tau Apiryon Copyright © 1995, 2008 Ordo Templi Orientis All Rights Reserved. 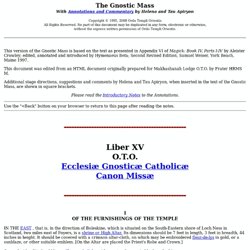 No part of this document may be duplicated in any form; electronic or otherwise, without the express written permission of Ordo Templi Orientis. This version of the Gnostic Mass is based on the text as presented in Appendix VI of Magick: Book IV, Parts I-IV by Aleister Crowley; edited, annotated and introduced by Hymenaeus Beta; Second Revised Edition, Samuel Weiser, York Beach, Maine 1997. 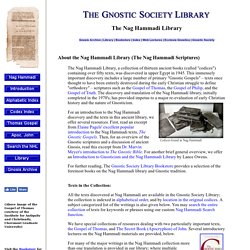 This immensely important discovery includes a large number of primary "Gnostic Gospels" – texts once thought to have been entirely destroyed during the early Christian struggle to define "orthodoxy" – scriptures such as the Gospel of Thomas, the Gospel of Philip, and the Gospel of Truth. The discovery and translation of the Nag Hammadi library, initially completed in the 1970's, has provided impetus to a major re-evaluation of early Christian history and the nature of Gnosticism. 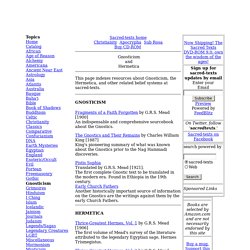 Fragments of a Faith Forgotten by G.R.S. Mead [1900]An indispensable and comprehensive sourcebook about the Gnostics. Gnosticism: ancient and modern. Christian history and faith groups Menu Sponsored link. 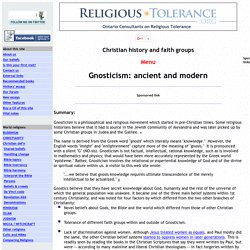 The Story Of The Storytellers - The Gnostic Gospels. The 52 texts discovered in Nag Hammadi, Egypt include 'secret' gospels poems and myths attributing to Jesus sayings and beliefs which are very different from the New Testament. 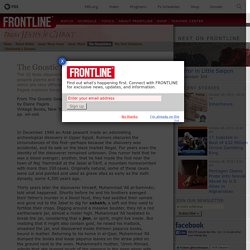 Scholar Elaine Pagels explores these documents and their implications. From The Gnostic Gospels by Elaine Pagels Vintage Books, New York: 1979 pp. xiii-xxiii In December 1945 an Arab peasant made an astonishing archeological discovery in Upper Egypt. Rumors obscured the circumstances of this find--perhaps because the discovery was accidental, and its sale on the black market illegal. Gnostics, Gnostic Gospels, & Gnosticism. A one-sentence description of Gnosticism: a religion that differentiates the evil god of this world (who is identified with the god of the Old Testament) from a higher more abstract God revealed by Jesus Christ, a religion that regards this world as the creation of a series of evil archons/powers who wish to keep the human soul trapped in an evil physical body, a religion that preaches a hidden wisdom or knowledge only to a select group as necessary for salvation or escape from this world. 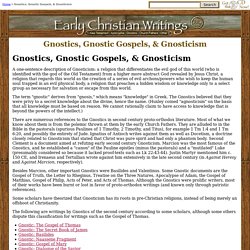 The term "gnostic" derives from "gnosis," which means "knowledge" in Greek. The Gnostics believed that they were privy to a secret knowledge about the divine, hence the name. (Huxley coined "agnosticism" on the basis that all knowledge must be based on reason. Gnostic Kabbalah: Introduction. We can find all sorts of books in bookstores about traditional Kabbalah, related to the mysticism of Judaism, but we seldom find books about Initiatic Kabbalah (Gnostic Kabbalah). 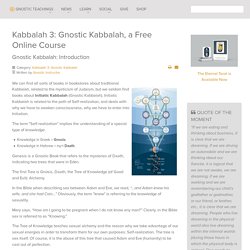 Initiatic Kabbalah is related to the path of Self-realization, and deals with why we have to awaken consciousness, why we have to enter into Initiation. The term "Self-realization" implies the understanding of a special type of knowledge. Knowledge in Greek = Gnosis.Knowledge in Hebrew = דעת Daath. Genesis is a Gnostic Book that refers to the mysteries of Daath, indicating two trees that were in Eden. Origins of the Gnostic Movement: nostics or Illuminati? This article is cited in Not in His Image, Ch. 9, p 147 The Origins of the Gnostic Movement One the most daunting problems posed by the Gnostic Coptic materials is the question of origins. 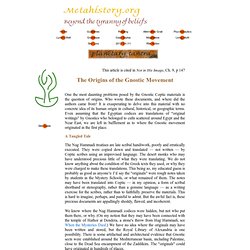 Who wrote these documents, and where did the authors came from? Gnosis & Esotericism books collection of the Ritman Library. This wide collecting area includes several sub-collections acquired to contextualize the collecting areas Hermetica, Alchemy, Mysticism and Rosicrucianism. 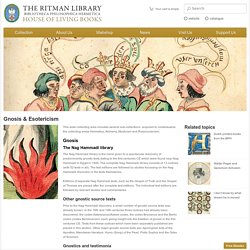 By means of a serene reflection, the gnostic philosophy always tries to take man up to the summit of the REAL BEING (that which is divine in each human creature). A gnostic philosopher loves wisdom and restlessly seeks for truth, which is contained in his innermost essence. It would be a serious error to talk about philosophy and just refer to the ancient Greeks’ philosophy: Plato’s, Socrates’s or Solon’s philosophy. Gnosis as a philosophy is, in reality, a very natural function of the consciousness, and springs (as we have already said) from different latitudes. Those who think that it only has its origin in Greece, or Persia, or Iraq, or Palestine, or in medieval Europe, are mistaken. Alchemy 01 The Elements in Spiritual Growth. Gnosticism: The Sorrow of Sophia - Lecture by Stephan Hoeller. Nag Hammadi Library. The Topic of Topics: Gnostic Parallels in the Writings of Carlos Castaneda. Gnostic Parallels in the Writings of Carlos Castaneda The eleven books of Carlos Castaneda record his apprenticeship with a Yaqui Indian, don Juan Matus, who plays Socratic mentor to Castaneda’s skeptical anthropologist.

Over more than twenty years, Castaneda learned the theory and practice of a new discipline proposed by his mischievous and demanding teacher. The Nag Hammadi Codices and Gnostic Christianity. Biblical Archaeology Society Staff • 07/01/2014 This Bible History Daily feature was originally published in March 2011. It has been updated. —Ed. MetaHistory - Gaia and Gnosis, Deeper Ecology, Planetary Tantra, Telestics.

The Gnostics and Their Remains: Part I. Gnosticism and its Sources: The Ophites. Sacred Texts Gnosticism Index Previous Next Buy this Book at Amazon.com The Gnostics and Their Remains, by Charles William King, [1887], at sacred-texts.com. New age / gnostic / ophites. The Ophites is a blanket term for numerous gnostic sects in Syria and Egypt about 100 A.D. The common trait was that these sects would give great importance to the serpent of the biblical tale of Adam and Eve, connecting the Tree of Knowledge (of Good and Evil) to gnosis. In contrast to Christian interpretations of the Serpent as Satan, Ophites viewed the serpent as the hero, and the regarded the figure that the Bible identifies as God instead as being the evil demiurge.

As the Bible doesn't actually identify the serpent more than being a serpent, the Ophites felt perfectly justified in their position, pointing to the serpent's trying to cause Adam and Eve to gain knowledge, and the forbidding of this knowledge by the figure which the bible identifies as God. Christians supporting the church orthodoxy viewed gnosticism as their arch enemy, and took particular offence at the Ophites turning their views on its head, eventually persecuting them out of existence. Due to. Gnosis 01 - Introduction To Gnosis. Bernard of Clairvaux. Sophia (Gnosticism) Gnostic Christianity and the Myth of Sophia. Gnosis & Christianity: Jesus-Logos-Christos.