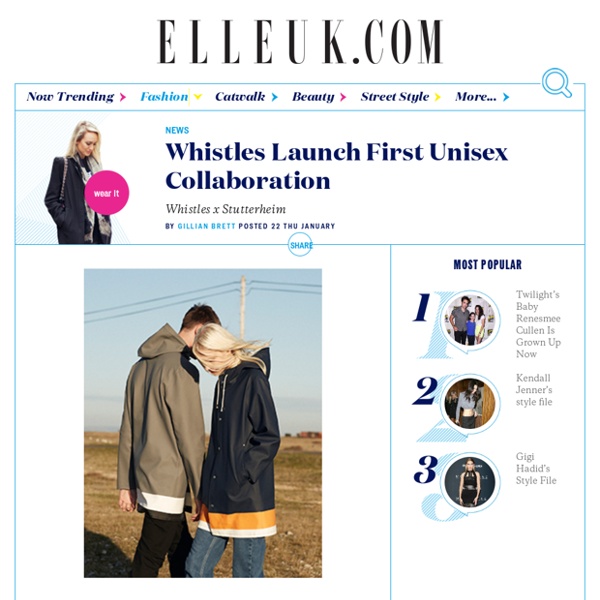 After successfully adding a menswear range to their artillery for autumn/winter 2014, Whistles have revealed their first offering to please both sides of the fence. Teaming up with niche Scandi rainwear brand Stutterheim (fans include Kanye West and the ELLE fashion team) the result is two sleek yet simple raincoat designs. Buy the navy with orange and white stripes for yourself, and the grey with white and black stripes for your boyfriend to craftily acquire both. We’re all familiar with Whistles' dreamy, directional collections, but for those who don’t frequent the menswear section (or venture to Stockholm) too often, Stutterheim is a Swedish rainwear brand, founded in 2010 by Alexander Stutterheim. Inspired by his fisherman grandfather, the coats are simple, timeless and, oddly, sexy. ‘Whistles collaborations are about finding experts in the market and working with them to produce beautiful, functional, carefully crafted exclusive pieces,’ said Whistles CEO Jane Shepherdson.

Whistles x Trekstock Our exclusive Whistles x Trekstock collaboration comprises five must-have accessories created by our guest creatives graphic designer and illustrator Kate Moross, jewellery designers Kate Hillier, Maria Francesca Pepe, Bex Rox and fashion designer Holly Fulton. ‘I am delighted that Whistles is supporting Trekstock; the charity’s approach is refreshing and heartfelt and they are able to introduce and share a sensitive subject, cancer in young people, in a way that is accessible and sensitive to their audience. The pieces are beautifully designed and I hope we can help raise awareness and donations a result of this collaboration’. Jane Shepherdson, Whistles CEO All proceeds will be donated to the super worthy Trekstock charity to aid their vital research into cancers that affect young people. Shop the entire collection here

Jane Shepherdson, Chief Executive Officer, Whistles LONDON, United Kingdom — Perhaps it’s not surprising that, in her spare time, Jane Shepherdson does flying trapeze in Hoxton, smack in the heart of achingly hip East London. Right from her earliest days in the fashion industry, Shepherdson has been known for taking risks and having her finger on the pulse of what’s cool. After getting her start as an assistant buyer at Topshop, back in 1984, Shepherdson spent twenty years working her way up the ladder to become Topshop’s brand director, effectively overseeing the retail, product, finance, HR and property departments of a company that, under her leadership, was transformed into a globally recognised brand, emblematic of the dynamic nature of British high street fashion. But in 2006, one week after Topshop boss Sir Phillip Green announced a now-defunct fashion collaboration with Kate Moss, Shepherdson abruptly resigned. Shepherdson’s next move was closely watched. BoF: Let’s start with the results.

Whistles and the Gang: Exclusive collaboration & in-store knitting event Comprised of a community of knitters worldwide, Wool and the Gang maintains a strong focus on ethical and sustainable production, as each piece is knitted by one of the 'gang'. The exclusive Whistles collaboration kit features, 1 x pre-knitted hat in mint, grey or classic black, alongside a knitting needle, yarn and a ‘how to’ beginners instruction manual. Need more help? we’ve also created a instructional video to guide you through the monogram process, available to watch here. If you are feeling a little rusty or would like some beginners tips, head to select stores on Saturday 6th & 7th of December, where members of Wool and the Gang will be on hand to guide you through the process or sew your own chosen monogram. There will also be pom poms, in 3 colours, available exclusively for the events, to purchase or have stitched in-store onto your hat.

New designer collaboration: Markus Lupfer for Whistles The London Fashion Week designer has teamed up with the high street retailer to create a collection of luxurious winter-appropriate pieces – from hats and scarves, to silk pyjamas and jumpers. Cashmere is used heavily throughout – from intarsia cashmere scarves and hats, to hot pink cashmere mittens. There are also small leather goods (we’re thinking perfect stocking fillers), including an iPad case emblazoned with neon hearts, a make-up bag and an iPhone holder. Advertisement - Continue Reading Below The Markus Lupfer for Whistles collection is in stores and online now.

Fashion retailer’s radical change of clothes Whistles’ existing customers were not happy with her decision to overhaul the company’s collection of dowdy dresses. However, the move did attract younger shoppers. And Whistles’ latest results show the strategy has paid off. Underlying UK sales rose 20pc and the company returned to the black with pre-tax profits of £1.1m. How Whistles Reemerged as One of the Most Exciting Contemporary Brands in Fashion 2008 was not an easy year for many in the fashion industry -- least of all, perhaps, for Jane Shepherdson. The former Topshop brand director, once described as "the most powerful woman on the high street," had just become chief executive of (and a substantial investor in) a fading British brand called Whistles. Days before the brand was scheduled to unveil its relaunch, Lehman Brothers collapsed.

Whistles Unveils Its Best Accessories Collaboration Yet MOXHAM X Whistles Necklace London designer Madeleine Moxham has teamed up with Whistles to create the perfect range of accessories. Fusing MOXHAM'S clean aesthetic with Whistles' signature style, the pieces exude Scandi cool, despite being born and bred in London. Clean, minimalist and fresh the combination of metal, leather and woven fabrics make these pieces versatile for both night and day. Whistles conquers the 'middle market' of British womenswear While Marks & Spencer announced a 6.8% drop of general sales last month, another corner of the British high street has been quietly flourishing. Whistles, the clothing brand set up by Lucille Lewin in the 1980s, announced this week that it had bought back the majority of its shares from the Icelandic government, a move which has underlined its growing strength. Whistles, which has been independent since parting ways with the retail group Mosaic in 2008, has gone from strength to strength despite a tough economic climate.