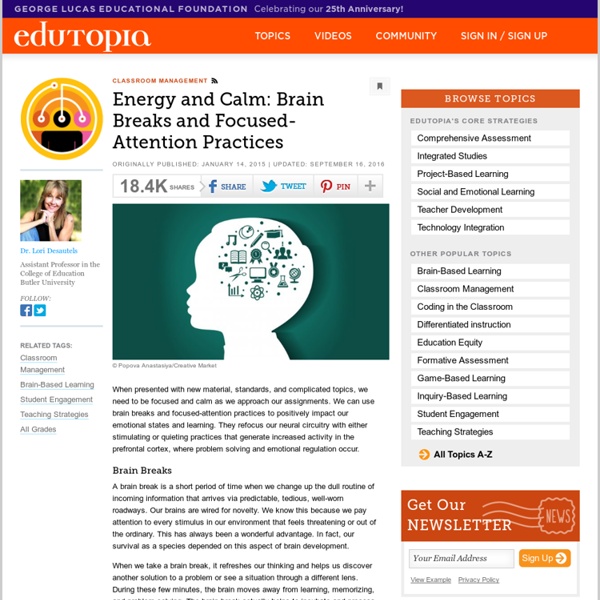 When presented with new material, standards, and complicated topics, we need to be focused and calm as we approach our assignments. We can use brain breaks and focused-attention practices to positively impact our emotional states and learning. They refocus our neural circuitry with either stimulating or quieting practices that generate increased activity in the prefrontal cortex, where problem solving and emotional regulation occur. Brain Breaks A brain break is a short period of time when we change up the dull routine of incoming information that arrives via predictable, tedious, well-worn roadways. Our brains are wired for novelty. When we take a brain break, it refreshes our thinking and helps us discover another solution to a problem or see a situation through a different lens. 1. I always carry a bag of household objects containing markers, scrap paper, and anything that one would find in a junk drawer -- for example, a can opener or a pair of shoelaces. 2. 3. 4. 5. 6. 7. 8. 9. 1.

Eudaimonia Discussion of the links between virtue of character (ethikē aretē) and happiness (eudaimonia) is one of the central concerns of ancient ethics, and a subject of much disagreement. As a result there are many varieties of eudaimonism. Two of the most influential forms are those of Aristotle[3] and the Stoics. Aristotle takes virtue and its exercise to be the most important constituent in eudaimonia but acknowledges also the importance of external goods such as health, wealth, and beauty. 20 Wonderful Effects Exercise Has on the Mind Studies find exercise increases stress resilience, fights anxiety, speeds up the mind, protects against dementia, is more fun than we predict, and more… If everyone got a little exercise, we could put half the doctors in the world out of a job. But it’s not just doctors who’d be out of a job if people could take the stairs every now and then, it’s also psychologists. Here are 20 wonderful psychological effects that exercise has on the mind. 1. Increases stress resilience

26 ‘Habits’ of People With Depression While depression can be in some ways the absence of action, there are still little habits, little routines, a person may pick up on when they re-enter a depressive episode. These habits can be small indicators you’re beginning to feel depressed again. They can even be positive things — habits developed to help you survive.

TiHKAL TIHKAL: The Continuation is a 1997 book written by Alexander Shulgin and Ann Shulgin about a family of psychoactive drugs known as tryptamines. A sequel to PIHKAL: A Chemical Love Story, TIHKAL is an acronym that stands for "Tryptamines I Have Known and Loved." Content[edit] Early trauma affects birds’ song memory : Deakin Invenio Deakin research linking early trauma in birds with their ability to remember important songs used for survival could have implications for human development. The authors of a paper recently published in the journal “Proceedings of the Royal Society of London B: Biological Sciences”, say their findings could shed light on the effects of early-life stress on speech and language development in children, as humans are the only other known group of animals apart from birds with dedicated parts in the brain for vocal learning. Lead researcher Professor Kate Buchanan, an avian behavioural ecologist in Deakin University’s Centre for Integrative Ecology, said the discovery was critical as the world’s birds used songs to help mate successfully and protect each other from predators, but now face increasing stress from changes to climate and habitat.

Feeling isolated? You're not alone. Here's why 1 in 4 of us is lonely - ABC Life Humans are social creatures. Our need to connect with others is deeply hardwired (and goes right back to when we'd hang out in groups so we could survive). Times have changed, but not being connected to others can still take a tremendous toll on our relationships, health, wellbeing, and our survival. So when one in four Australians reports feeling lonely at least one day a week, it's something we need to pay attention to.

Habits young men can develop to avoid loneliness later in life - ABC Life "One year ago, I separated from my wife and now I have no friends." After we published the first stories in our social isolation series, reader Daniel wrote to share his experience. It was one of many similar emails we received from men, who spoke of loneliness after a major life event such as a relationship breakdown, a job loss, or the death of a partner. Plenty of research shows men make friends less easily than women, and take part in fewer social activities. And it is something worth knowing if you're a young man, as it can worsen with age. The impacts can be devastating, with extensive research showing that this kind of isolation correlates to higher levels of depression and anxiety.

The Science of Stress and How Our Emotions Affect Our Susceptibility to Burnout and Disease I had lived thirty good years before enduring my first food poisoning — odds quite fortunate in the grand scheme of things, but miserably unfortunate in the immediate experience of it. I found myself completely incapacitated to erect the pillars of my daily life — too cognitively foggy to read and write, too physically weak to work out or even meditate. The temporary disability soon elevated the assault on my mind and body to a new height of anguish: an intense experience of stress. Even as I consoled myself with Nabokov’s exceptionally florid account of food poisoning, I couldn’t shake the overwhelming malaise that had engulfed me — somehow, a physical illness had completely colored my psychoemotional reality. This experience, of course, is far from uncommon. Pre-modern medicine, in fact, has recognized this link between disease and emotion for millennia.

How ‘extinction neurons’ help us block out our worst memories A new study examined how the effects of fear-related memories can be silenced in the brain. Forming new and positive "extinction memories" can help to silence fearful memories.The study found that the hippocampus plays a significant role in "extinction training." Memories associated with traumatic events can cause unexpected problems in everyday life. A woman with a phobia of dogs might experience a rush of fear when she happens to find herself right next to a dog without a leash in the park. Measurement of Well-Being The World Health Organization’s definition of health clearly underscores the importance of well-being: “Health is a state of complete physical, mental and social well-being and not merely the absence of disease or infirmity.” Well-being is a broad construct that encompasses multiple dimensions, which can essentially be divided into two large domains: objective and subjective well-being. As a result, various scales and indices have been developed to measure both domains. For a non-exhaustive list of relevant articles on well-being, click here. Objective well-being

Concepts of Mental and Social Wellbeing Social wellbeing, or the lack of it, is familiar to public health professionals in the context of social and income equality, social capital, social trust, social connectedness and social networks. These concepts are set primarily in the context of social policy and social interactions at community or societal level. Mental wellbeing, as previously defined, includes another aspect of social wellbeing - good relationships with others on a one-to-one, small group or family level. All these aspects of social wellbeing are known to have a profound effect on mental health and wellbeing individually and collectively. What is not so widely appreciated is the reverse relationship. Mental wellbeing includes the capacity to make health and happiness enhancing relationships with others.

Ministers may advise on how much sleep people need Image copyright Damir Khabirov / Getty Images Ministers are reportedly planning to issue guidance on how much sleep people should be getting every night. The recommendations are expected as part of a series of proposals aimed at improving public health in the UK. According to a leaked draft of the plans seen by The Times, up to three in four adults do not regularly get at least seven hours sleep per night. It warns that making do with less has been linked to a range of physical and mental health problems. Ministers are now planning to review the evidence - according to the draft, problems associated with lack of sleep include an increased risk of obesity, strokes, heart attacks, depression and anxiety.

Related:
Related:  Idrott och hälsa   -  Mental health   -  wellbeing2   -  Març   -  Login - FetLife   -  Myrko Thum's Personal Development Blog   -  Boost Your Brain Power: A Simple Exercise | Inc.com   -  Stress (biology) - Wikipedia, the free encyclopedia   -  MoodGYM Training Program   -  The Best of Socially Awkward Penguin   -  Depression Test - Am I depressed | Moodscope   -  Abusive parents: What do grown children owe the mothers and fathers who made their childhood a living hell?   -  The Future of Self-Improvement, Part I: Grit Is More Important Than Talent - 99U   -  Rosalind Robertson (the DIY Couturier) (21 Tips to Keep Your Shit Together When You're...)   -  Depression Part Two   -  Be Brain Fit | Your Guide to Better Cognitive and Mental Health   -  Sleep, Learning, and Memory | Healthy Sleep   -  The 5 Best Ways to Build Resiliency : Experience Life   -  That gut feeling   -  Gut feelings: the future of psychiatry may be inside your stomach   -  Kelly McGonigal: How to make stress your friend - YouTube   -  24 Essential Mind Mapping and Brainstorming Tools   -  Gretchen Rubin   -  10 Most Zen-Friendly Websites to Keep You Calm and Productive at Work   -  25 Things You Keep In Your Life That Are Only Holding You Back | Thought Catalog   -  5 Ways To Rewire Your Brain For Meaningful Life Changes - mindbodygreen   -  Welcome to Forbes   -  News is bad for you – and giving up reading it will make you happier | Media   -  Supporting a Loved One Through PTSD or Panic Attacks | sometimesmagical   -  Meditation May Protect Your Brain - Pacific Standard: The Science of Society   -  Need Some Motivation Right Now? Read This IMMEDIATELY   -  16 Scientifically-Backed Ways To Boost Your Happiness Almost Instantly (INFOGRAPHIC) | Huffington Post   -  Why Generation Y Yuppies Are Unhappy   -  My philosophy for a happy life: Sam Berns at TEDxMidAtlantic 2013 - YouTube   -  How Long To Nap For The Biggest Brain Benefits | Spirit Science and Metaphysics   -  TODAY Health & Wellness - Fitness, Diet & Relationships - TODAY.com   -  16 Habits Of Highly Sensitive People | The Huffington Post