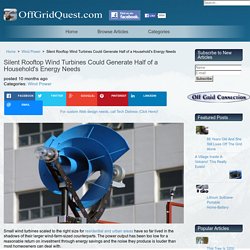 Small wind turbines scaled to the right size for residential and urban areas have so far lived in the shadows of their larger wind-farm-sized counterparts. The power output has been too low for a reasonable return on investment through energy savings and the noise they produce is louder than most homeowners can deal with. Viaducts could be the best new place for wind turbines. Solar power has the great benefit of being able to be installed in a wide variety of places, from large solar farms to residential rooftops, from floating on top of reservoirs to highway noise barriers. 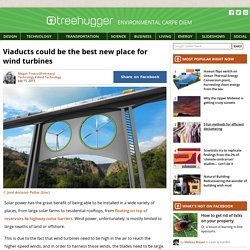 Wind power, unfortunately, is mostly limited to large swaths of land or offshore. This is due to the fact that wind turbines need to be high in the air to reach the higher-speed winds, and in order to harness those winds, the blades need to be large. Also, wind turbines face greater NIMBYism than solar panels from people who think they're an eyesore or too loud. A new study says that there is another option than just large wind farms in the middle of nowhere: viaducts. The long bridge structures are typically high off of the ground and usually contain a series of arches within which wind turbines could be built. Bladeless Turbines? Say Hello To Vortex Wobble Technology. Terms and Conditions Welcome to www.ewao.com (the "Website"). 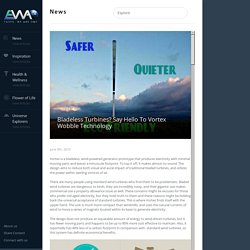 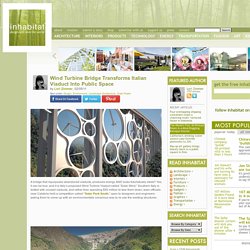 Yes, it can be true, and it is Italy’s proposed Wind Turbine Viaduct called “Solar Wind.” Southern Italy is dotted with unused viaducts, and rather than spending $50 million to tear them down, town officials near Calabria held a competition called “Solar Park South,” open to designers and engineers asking them to come up with an environmentally conscious way to re-use the existing structures. Solar Wind, conceived by the design team of Francesco Colarossi, Giovanna Saracino and Luisa Saracino, has an abundance of green benefits. Using the space between the viaduct, the team proposed installing 26 wind turbines, which would produce 36 million kilowatt hours of electricity per year! Additionally, the roadway across the bridge would be densely lined with solar cells coated in clear plastic, producing another 11.2 million kilowatt hours. 89 Year Old Man Develops Bladeless Bird-Friendly Wind Turbine.

Wind farms paid £1m a week to switch off. Since wind farms first started receiving constraint payments five years ago, more than £100 million has been handed over in compensation for switching off. 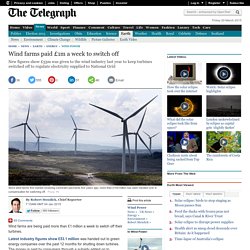 Over the past year, one wind farm – Whitelee - received more than £20 million for turning off its turbines. Whitelee, Britain’s largest onshore wind farm, with 215 turbines and situated just outside Glasgow, is owned by Scottish Power Renewables, a subsidiary of the Spanish energy giant Iberdrola. The payments are highest in Scotland because electricity demand north of the border does not always match the amount of power produced by turbines and other energy sources. Artificial Wind Tree Uses Micro Turbine Leaves To Generate Electricity. Great designs can be recognized at a first glance and this next one is pure genius. 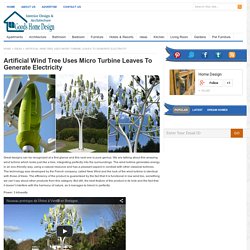 In Rotterdam, a wind turbine that's also an apartment complex (and an observation wheel) Over the past two decades, cities looking to shake things up with a tourist-snaring, skyline-disrupting architectural showpiece have turned to Ferris wheels. 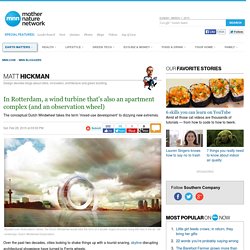 Once restricted to state fairgrounds and mid-sized amusement parks where they served as the diversion of choice for necking teenagers, giant Ferris wheels — or observation wheels, if you want to get technical — have been popping up in dense urban areas with greater frequency — each, it would seem, bigger and wheelier than its predecessor: The London Eye (2000), the Singapore Flyer (2008), the Seattle Great Wheel (2012), the Melbourne Star (opened in 2008 for a brief run; reconstructed and reopened in 2013), the Capital Wheel outside of Washington, D.C., at National Harbor (2014), and the world’s current tallest Ferris wheel, the 550-foot High Roller on the Las Vegas Strip (2014). 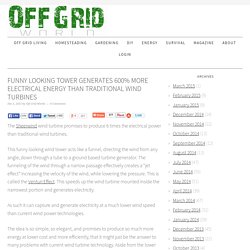 This funny looking wind tower acts like a funnel, directing the wind from any angle, down through a tube to a ground based turbine generator. The funneling of the wind through a narrow passage effectively creates a “jet effect” increasing the velocity of the wind, while lowering the pressure. 9 ingenious wind turbine designs: Windstalk bladeless turbine.

Interested in uplifting stories on the natural world, sustainable communities, simple food, and new thinking on how to live well? 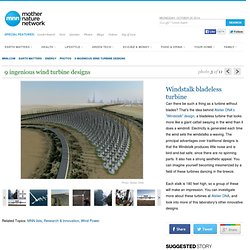 Please enter a valid email address and try again! No thanks. This Weird, Massive Tower May Be the Future of Energy in the U.S. The news: The country's largest freestanding structure will soon start construction — and it's going to be a solar-wind tower. 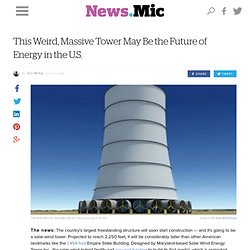 Projected to reach 2,250 feet, it will be considerably taller than other American landmarks like the 1,454-foot Empire State Building. Designed by Maryland-based Solar Wind Energy Tower Inc., the solar-wind hybrid facility just secured funding to build its first model, which is projected to stand near San Luis, Ariz., by 2018. How it works: A network of sprayers emits a fine mist of water droplets over the upper lip of the structure; the mist subsequently evaporates, absorbing the ambient heat of the surrounding atmosphere (that's the solar component). The result is dense, cool air that rapidly flows to the bottom of the structure. This Silent Rooftop Turbine Could Generate Half of Your Home's Energy. The news: While wind power is one of the cleanest sources of renewable energy in the world — and the top source for new U.S. electricity generation as of 2012 — many people still take issue with turbines and their noise.

Though some people living near turbines say that the low hum doesn't cause much trouble, others report daily annoyance, with some controversially linking the noise to physical ailments. But a Dutch company called Archimedes has set out to change that mindset by releasing the Liam F1 Urban Wind Turbine, a $5,400 model set to roll out next January. The company promises to boost efficiency and cut your electricity bill, while making little to no noise in the process. "This compact wind turbine, with a diameter of only 5 feet, will cause a revolution in the world of generating electrical power and resistance theories," the company said in a statement.

Very cool and efficient new design. - EcoVision Sustainable Learning Center. Silent rooftop wind turbines could generate half of a household's energy needs. Build this open source DIY wind turbine for $30. Getting started with home wind energy projects can set you back a pretty penny if you buy a finished product, but if you're a little bit handy and don't mind scrounging for materials and getting creative in the garage or backyard, you can try your hand at building one of these DIY wind turbines for about $30 in materials.

After all, it is #iheartrenewables week! We've previously covered Daniel Connell's open source concentrated solar collector plans, but now he's back with another great DIY renewable energy project, a vertical axis wind turbine based on the Lenz2 lift+drag design. Connell's design calls for using aluminum lithographic offset printing plates to catch the wind, which he says can be obtained cheaply (or possibly even free) from an offset printing company, and a variety of hardware and a bicycle wheel. Vertical Turbines, Packed Tight, Boost Power. Introducing the Altaeros BAT: The Next Generation of Wind Power. Lenz2 turbine. A few details for building the 3ft diameter x 4ft tall Lenz2 turbine... Below is a drawing for the wing ribs cut from 3/4" plywood. NOTE: The above drawing shows that only 6 ribs are required, that should actually be 9 ribs required.