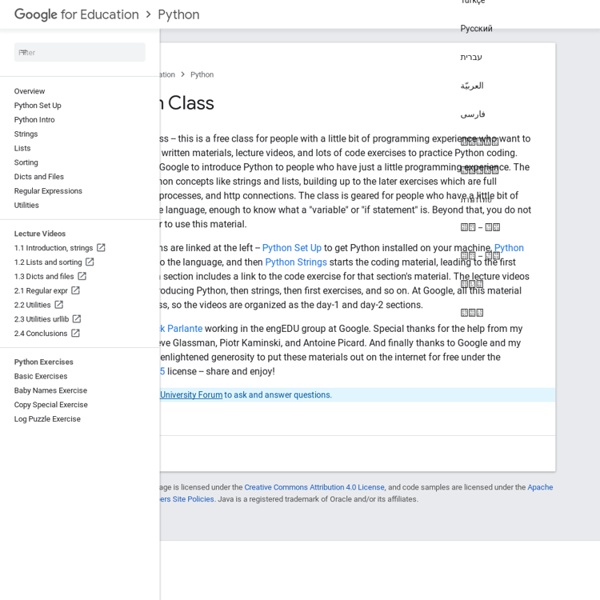 Welcome to Google's Python Class -- this is a free class for people with a little bit of programming experience who want to learn Python. The class includes written materials, lecture videos, and lots of code exercises to practice Python coding. These materials are used within Google to introduce Python to people who have just a little programming experience. The first exercises work on basic Python concepts like strings and lists, building up to the later exercises which are full programs dealing with text files, processes, and http connections. The class is geared for people who have a little bit of programming experience in some language, enough to know what a "variable" or "if statement" is. Beyond that, you do not need to be an expert programmer to use this material. This material was created by Nick Parlante working in the engEDU group at Google. Tip: Check out the Python Google Code University Forum to ask and answer questions.

Python's IDLE editor: How to Use - by Dr A. Dawson Copyright Dr A Dawson 2005 - 2016 This file is: Python_Editor_IDLE.htm First created: Tuesday 8th March 2005, 7:28 PT, ADLast updated: Saturday 31st January 2015, 9:05 PT, AD This page explains how to run the IDLE integrated development environment (IDE) for editing and running Python 2.x or Python 3 programs. The IDLE GUI (graphical user interface) is automatically installed with the Python interpreter. IDLE was designed specifically for use with Python.

Pandas Pivot Table Explained - Practical Business Python Introduction Most people likely have experience with pivot tables in Excel. Pandas provides a similar function called (appropriately enough) pivot_table . Tutorial to set up PCSX2, the best emulator for PS2 The end of the previous generation of console games and the start of the current one has been heralded by loads of remakes of games less than a decade or so old, the so-called HD re-edits. Nevertheless, there is an economic alternative to such silliness (at least in most cases): the now-ancient PlayStation 2 continues to this day to be a source of titles to revisit, and an emulator like the program PCSX2 can give a layer of allure that lets you go back and enjoy them, complete with perked-up graphics. Here is a short tutorial to configure it. BIOS and gamepad setup Once you’ve installed the emulator you’ll get a wizard that lets you select the default plugins and the language for the interface.

Best Python Resources The Python community is amazing at sharing detailed resources and helping beginners learn to program with the language. There are so many resources out there though that it can be difficult to know how to find them. This page aggregates the best general Python resources with descriptions of what they provide to readers. New to programming Pong Pong (marketed as PONG) is one of the earliest arcade video games; it is a tennis sports game featuring simple two-dimensional graphics. While other arcade video games such as Computer Space came before it, Pong was one of the first video games to reach mainstream popularity. The aim is to defeat the opponent in a simulated table tennis game by earning a higher score. The game was originally manufactured by Atari Incorporated (Atari), who released it in 1972. Allan Alcorn created Pong as a training exercise assigned to him by Atari co-founder Nolan Bushnell.

Why you should play PS2 classics on PC, not PS4 Game fans had a lot to be excited about at Sony’s PlayStation Experience last week. Psychonauts 2, for example! Many of the more promising games that showed up on Sony’s stage will also be making their way to the PC, but one of the biggest announcements—or at least the one I saw the most excitement about—wasn’t about a new game. It concerned eight PS2 classics, including Dark Cloud and GTA III, being made playable on PS4... via emulation, at $15 a pop.

12 Reasons Why You Should Learn Python in 2019 Python is an object-oriented and open-source language developed in the 1980s by Dutchman Guido van Rossum. Tech Giants like Cisco, IBM, Mozilla, Google, Quora, Hewlett-Packard, Dropbox, and Qualcomm are using this language owing to its simplicity and elegance. Most developers prefer Python over the plethora of programming languages out there because of its emphasis on readability and efficiency. There are several reasons why you should consider Python training. Download – Orange This page contains nightly builds from the code repository. These are typically stable and we recommend using them. Windows ¶ Think Python: How to Think Like a Computer Scientist How to Think Like a Computer Scientist by Allen B. Downey This is the first edition of Think Python.