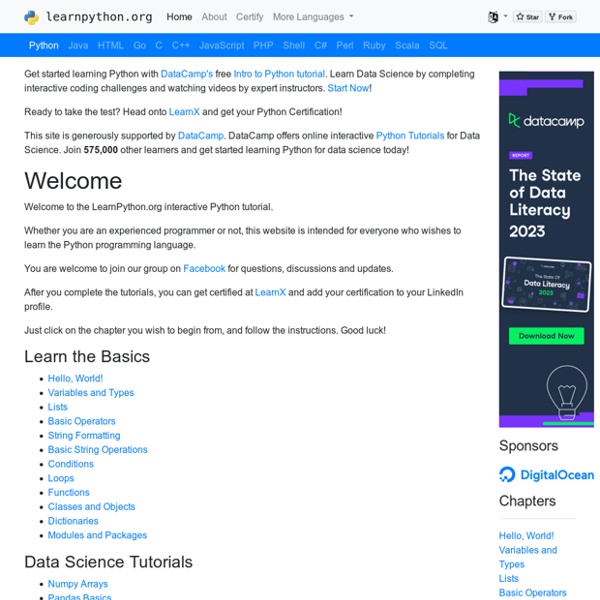 30 Python Best Practices, Tips, And Tricks With the holidays behind us, most of us have returned to our day jobs. For all those hard workers, here are 30 Python best practices, tips, and tricks. I’m sure they’ll help you procrastinate your actual work, and still learn something useful in the process. In case you missed it: Python 2 is officially not supported as of January 1, 2020. This guide has a bunch of examples that only work in Python 3. S189: Introduction to Python - Materials This mini quiz is totally and entirely optional. You don't need to turn it in, it is all for your benefit. You are, however, more than welcome to go over your solutions with the teaching staff, or get help if you are having trouble with any of the problems. However, do try to give this an honest shot, as it'll help you get a feel for your programming skills. Handouts

A Unix and Perl Primer for Biologists Available translations of this page: Belorussian Deutsche Russian Serbian We have written a basic introductory course for biologists to learn the essential aspects of the Perl programming language. This started as a course for grad students at UC Davis, and we then ran it as a one week intensive course for anyone on campus who was interested (sponsored by the UC Davis Genome Center). The feedback from these courses was very positive and so we have decided that we should make it available to anyone who is interested. The course is very much aimed at people with no prior experience in either programming or Unix. The Python Tutorial Python is an easy to learn, powerful programming language. It has efficient high-level data structures and a simple but effective approach to object-oriented programming. Python’s elegant syntax and dynamic typing, together with its interpreted nature, make it an ideal language for scripting and rapid application development in many areas on most platforms. The Python interpreter and the extensive standard library are freely available in source or binary form for all major platforms from the Python Web site, and may be freely distributed. The same site also contains distributions of and pointers to many free third party Python modules, programs and tools, and additional documentation.

A Visual Intro to NumPy and Data Representation – Jay Alammar – Visualizing machine learning one concept at a time The NumPy package is the workhorse of data analysis, machine learning, and scientific computing in the python ecosystem. It vastly simplifies manipulating and crunching vectors and matrices. Some of python’s leading package rely on NumPy as a fundamental piece of their infrastructure (examples include scikit-learn, SciPy, pandas, and tensorflow). Beyond the ability to slice and dice numeric data, mastering numpy will give you an edge when dealing and debugging with advanced usecases in these libraries. In this post, we’ll look at some of the main ways to use NumPy and how it can represent different types of data (tables, images, text…etc) before we an serve them to machine learning models.

An Intro to Interactive Programming in Python - Coursera/Rice About this course: This two-part course is designed to help students with very little or no computing background learn the basics of building simple interactive applications. Our language of choice, Python, is an easy-to learn, high-level computer language that is used in many of the computational courses offered on Coursera. To make learning Python easy, we have developed a new browser-based programming environment that makes developing interactive applications in Python simple. These applications will involve windows whose contents are graphical and respond to buttons, the keyboard and the mouse. In part 1 of this course, we will introduce the basic elements of programming (such as expressions, conditionals, and functions) and then use these elements to create simple interactive applications such as a digital stopwatch. Part 1 of this class will culminate in building a version of the classic arcade game "Pong".

Ruby on Rails Tutorial: Learn Rails by Example book and screencasts by Michael Hartl Michael Hartl Contents Foreword My former company (CD Baby) was one of the first to loudly switch to Ruby on Rails, and then even more loudly switch back to PHP (Google me to read about the drama). Solving Every Sudoku Puzzle by Peter Norvig In this essay I tackle the problem of solving every Sudoku puzzle. It turns out to be quite easy (about one page of code for the main idea and two pages for embellishments) using two ideas: constraint propagation and search. Sudoku Notation and Preliminary Notions Introduction to Python [Video] Intrigued by Python? Learn how to get started with this popular language, whether you’re new to programming or just new to Python. This engaging video course teaches you Python’s core concepts and data types through hands-on exercises, and delivers fun and useful projects so you can put everything together. With an emphasis on code readability, Python enables programmers to express concepts in fewer lines of code than you can with many other languages. Open source developer Jessica McKellar helps you discover what’s possible with Python and provides the foundation you need to begin writing programs of your own.

Code Like a Pythonista: Idiomatic Python In this interactive tutorial, we'll cover many essential Python idioms and techniques in depth, adding immediately useful tools to your belt. There are 3 versions of this presentation: ©2006-2008, licensed under a Creative Commons Attribution/Share-Alike (BY-SA) license. My credentials: I am a resident of Montreal,father of two great kids, husband of one special woman,a full-time Python programmer,author of the Docutils project and reStructuredText,an editor of the Python Enhancement Proposals (or PEPs),an organizer of PyCon 2007, and chair of PyCon 2008,a member of the Python Software Foundation,a Director of the Foundation for the past year, and its Secretary. In the tutorial I presented at PyCon 2006 (called Text & Data Processing), I was surprised at the reaction to some techniques I used that I had thought were common knowledge.

Practical Data Cleaning with Python Tips and tools for data janitors It's a commonly cited statistic that data scientists spend roughly 80% of their time processing, wrangling, and munging their data and only 20% actually analyzing it. Speeding up the time you spend cleaning your data even a small amount can lead to valuable gains down the line. Join expert Katharine Jarmul for a hands-on, in-depth exploration of practical data cleaning with Python, as she highlights the tools that can help speed up the data wrangling process and automate (or at least allow for general scripting) of some of the repetitive processes.

Professors without borders Will online learning spell the end of universities? Stanford University: students from Bakersfield to Bangalore can now take its computer science courses online Primm, Nevada, is a three-casino, one-rollercoaster town in the Mojave Desert, just across the California state line and 40 minutes south of Las Vegas’s shimmering neon. Road-weary truckers can choose between Whiskey Pete’s, Terrible’s Lotto, and Starbucks. The centre of town is a discount fashion megamall.