EdS Langues littératures et cultures étrangères ANGLAIS. HISTORY OF GAP YEAR. Why students need a global awareness and understanding of other cultures. As a languages teacher, it never ceases to astound me to think that the rasping, whistling and vibrating sounds emanating from our mouths and noses when you talk can be effortlessly decoded by our interlocutors as meaningful language, allowing us to communicate with one another in astonishing levels of complexity. 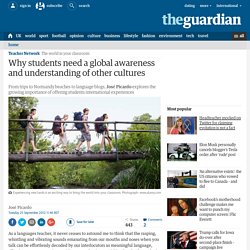 Language is a defining feature of people. In many western societies we might be tempted to assume that being able to speak and understand more than one language is the exception. However, it is estimated that between half and three quarters of the world's population is bilingual to some degree. That's more than four billion people who understand that with different languages come different ways to interpret the world. Marcel Proust, the French novelist, observed that "the real voyage of discovery consists not in seeing new lands but in seeing with new eyes". 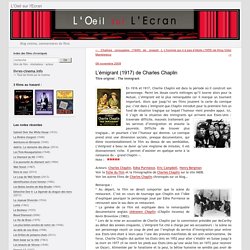 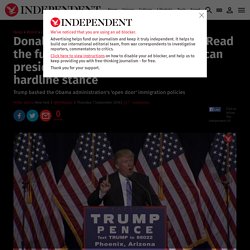 Read the full transcript below as Mr Trump returns to his hardline stance on immigration reform. Read the speech in full below Thank you, Phoenix. I am so glad to be back in Arizona, a state that has a very special place in my heart. I love the people of Arizona and, together, we are going to win the White House in November. Tonight is not going to be a normal rally speech. Instead, I am going to deliver a detailed policy address on one of the greatest challenges facing our country today: illegal immigration. I have just landed having returned from a very important and special meeting with the President of Mexico – a man I like and respect very much, and a man who truly loves his country. We agreed on the importance of ending the illegal flow of drugs, cash, guns and people across our border, and to put the cartels out of business.

It was a thoughtful and substantive conversation. (Ralph Freso/Getty) The immigration plans of Trump and Hillary in 5 minutes. Immigration has become a key political issue in the current campaign. 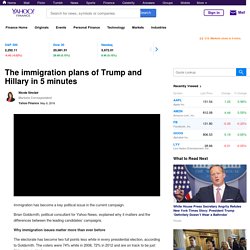 Brian Goldsmith, political consultant for Yahoo News, explained why it matters and the differences between the leading candidates’ campaigns. Why immigration issues matter more than ever before The electorate has become two full points less white in every presidential election, according to Goldsmith. The voters were 74% white in 2008, 72% in 2012 and are on track to be just 70% white in 2016. “It’s more important than ever for presidential candidates to appeal to voters who are closer to the immigrant experience and for whom this is a threshold issue-- that is Latino voters and Asian Americans.” Additionally, Goldsmith emphasized that we’re a nation of immigrants. AJ+ - There's already a wall at the U.S.-Mexico border.... EE Illegal immigration.

Frozen River Trailer. What Makes London a Global City?-UK Market. London is a global city both in a world-class league but also increasingly in a league of its own. 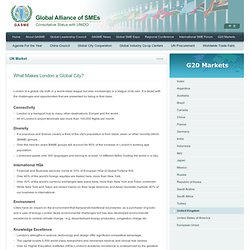