Understanding the world of Nanberry

First attempts at communication. Almost a year after their arrival at Sydney Cove, Governor Arthur Phillip (1738–1814) and his officers had acquired very little knowledge about the Eora people. 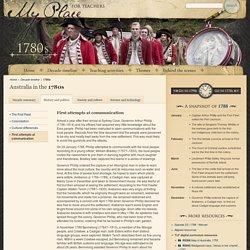 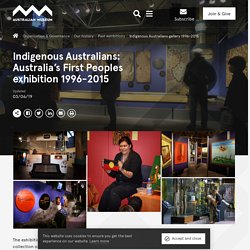 Between 1790 and 1802, Pemulwuy waged a guerrilla war on the young colony of New South Wales. This was in response to the invasion of his country, the killing of his people and the restriction of his peoples' food sources caused by the British. Pemulwuy planned and carried out several 'lightning' or guerilla attacks against the European settlements in the Parramatta and Toongabbie areas. Pemulwuy was a strong, charismatic leader with a fierce determination to rid his land of the European settlers. Welcome to and Acknowledgement of Country. Welcome to Country is an ancient Indigenous tradition that was practiced when one Indigenous community sought permission to enter another clan’s traditional land. 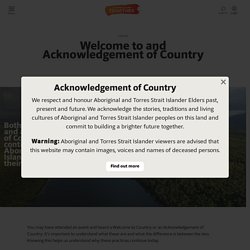 The ceremony varied from clan to clan. Joy Murphy Wandin describes Welcome to Country as it was practiced by her people, the Wurundjeri: “When there was a request to visit Country, the Werrigerri (a young man selected by the Elders of the community) would go on behalf of the community under the voice of the Elder, the Nurungeeta. There would be this negotiation and that could take a long time, it could take months.

Everything could take a long time in traditional Aboriginal culture… The Convicts’ Colony - 1788-1815. Initially, convict work was focused on the basics of survival and shelter: clearing land; cutting trees; forming docks, tracks, bridges and fortifications; and gathering materials for storehouses and workshops, such as shingles, logs, saplings, rocks, mud, sand and oyster-shell mortar. Convicts built their own houses, some in neat rows, others jumbled on the rugged shelves of The Rocks. Convicts also hunted, fished, and collected oysters from the foreshores, as well as vegetables and tea from the bush.

Historians think that this is why the population were reportedly in such good health. In addition, coming from a country where their beloved ‘commons’ had been taken from them and enclosed, they relished this new freedom to roam and forage in the bush. By the mid-1790s, with the colony’s future looking brighter, convict labour was directed towards larger-scale agricultural production. Aboriginal people of coastal Sydney. Early artwork describing aboriginal perspective of colonisation - video. The convict impact on Aboriginal people – Hyde Park Barracks. The lasting impact of the convict system ‘I think it is important that they tell these stories in the Hyde Park Barracks to get the truth out there.’Aunty Sue Blacklock AM, Nucoorilma Elder of the Gamilaraay Nation The Hyde Park Barracks is built on Gadigal land. 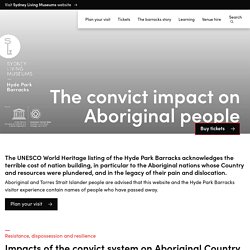 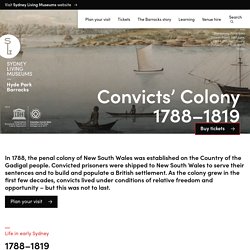 Just over 1000 people stepped ashore at a small bay. More than 700 were convicts; the rest were soldiers and officials, some with their families and servants. National Museum of Australia. Disrupting colonisation Pemulwuy featured significantly in the ongoing resistance to colonisation. 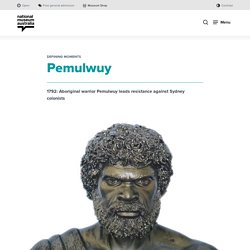 He was involved in the mortal wounding of John McIntyre on 10 December 1790. McIntyre, appointed Phillip’s gamekeeper on 3 March 1788, was one of three convicts armed and sent out to hunt game to add to the colony’s meagre and dwindling supplies of food. The Australian Dictionary of Biography notes that McIntyre was ‘feared and hated by the Eora people’, and it surmises that the attack was a retribution for him breaking Indigenous laws and for his violence towards Indigenous people. Phillip, who had until then been tolerant in his views, changed his position and called for a punitive raid. My Place Website. Summary of the 1780s. In 1787 Lord Sydney (1733–1800) of the British Colonial Office in Great Britain gave instructions to Governor Arthur Phillip (1738–1814) to establish a penal colony on the Dutch-named land, New Holland. 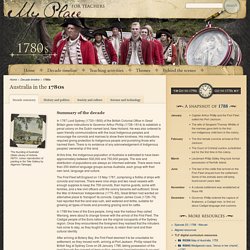 He was also ordered to open friendly communications with the local Indigenous peoples and encourage the convicts and marines to show them kindness. His instructions required giving protection to Indigenous people and punishing those who harmed them. There is no evidence of any acknowledgement of Indigenous peoples' ownership of the land. At this time, the Indigenous population of Australia is estimated to have been approximately between 500,000 and 750,000 people.

The size and distribution of populations are always an informed estimate. The First Fleet left England on 13 May 1787, comprising a flotilla of ships with convicts and marines. Summary of the 1790s. John White - Australian Dictionary of Biography. John White (1756? 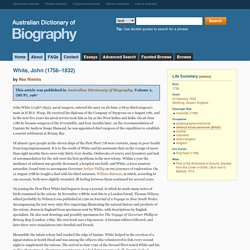